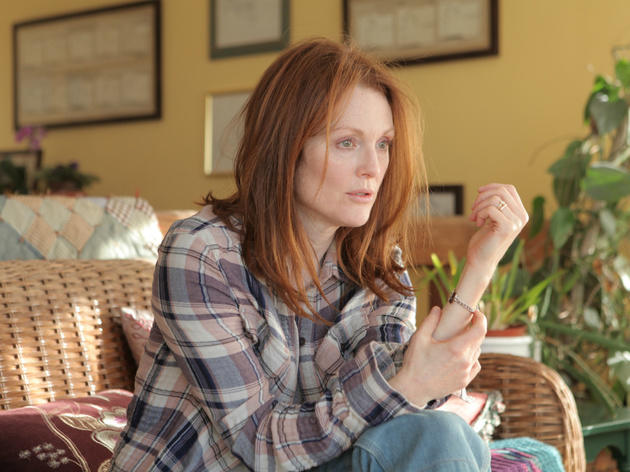 Alzheimer’s disease is a Greek tragedy: preordained by genetics, the neurodegenerative disorder is an unfathomably cruel death march down a tunnel that disappears behind you and gets darker with every step. 'Still Alice', adapted by married couple Richard Glatzer and Wash Westmoreland from Lisa Genova’s 2007 novel, is the rare film possessed with the courage required to shine a light into that abyss knowing full well that down is the only way out.

For illustrious New York linguistics professor Dr Alice Howland (an astonishingly controlled Julianne Moore), the first symptoms are subtly ominous. Just 50 years old, Alice is too young to assume that a momentary lapse might be an early sign of dementia. And then, over the length of a single devastating close-up, Alice learns that the rest of her life will be devoted to what she later refers to as 'the art of losing'.

After that bombshell diagnosis, there’s only one direction in which 'Still Alice' can go, and the film directly confronts the inevitability of its story. Profoundly moving but never exploitative, the script homes in on the mundane exchanges that form the foundation of our closest relationships and demolishes that bedrock in a series of masterfully precise explosions.

Even the script’s more suspect choices, like a perpetual game of 'Words with Friends' shared between Alice and her oldest daughter (Kate Bosworth), become avenues for the kind of shattering details that make each case of Alzheimer’s its own struggle. Most resonant of all is the strained relationship between Alice and her actor daughter (Kristen Stewart, continuing to defy expectations), which is imbued with new tenderness when Alice’s marriage to her husband (Alec Baldwin) begins to deteriorate at the same pace as her mind.

While 'Still Alice' provides glimpses of Stewart performing plays by Anton Chekhov and Tony Kushner, the theatricality of those scenes illuminates the delicate visual style with which Glatzer and Westmoreland imbue the others. Relying on subtle uses of shallow focus and takes that run long enough for Alice to forget how they began, the story is told with such a damaged grace that it could be seen as a neurological snuff film, if not for the unyielding empathy for its characters that ultimately makes it such a rewarding experience. As tough as it is to watch, 'Still Alice' resolves as a beautiful illustration of why the art of losing should never be taken for granted.