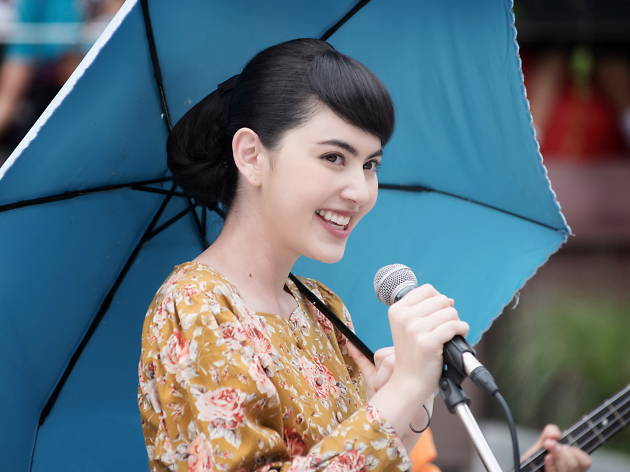 Parn is a crotchety, bothersome granny who’s a constant headache to everyone around her. One day, she hears her family talking about sending her to a nursing home. Saddened by her family’s decision, she wanders around the streets from her home before impulsively entering a mysterious photo studio intending to have her last portrait taken. By some twist of magic, Parn is transformed into a 20-year-old girl after the shoot. Newly reborn, she decides to live her life to the fullest and joins a band (with her unknowing grandson) to pursue her long-lost dream of becoming a singer. Sounds like the plot of a successful comedy? Yes, it is.

The first movie produced by CJ Major Entertainment, a joint venture between Thai Major Cineplex Group and CJ E&M from South Korea, Suddenly Twenty is a remake of the successful Korean movie Miss Granny (2014). The Thai adaptation stars Davika Hoorne as Parn along with heartthrob Kritsanapoom “JJ” Pibulsonggram as Boom, Parn’s grandson, and actor/singer Saharat Sangkapricha as Nut, a music producer who sees something different in her.

Apart from the conventional storyline, some nonsense dialogue, over-the-top performances and oh-so-Korean-it-never-happened-in-Thailand sequences, Suddenly Twenty is a fun tearjerker with a heart. The film tackles the challenges faced by the elderly quite well and includes dialogue you would definitely only hear from your grandmother.

Playing with the conception of how the younger generation thinks of the elderly—boring, uptight or, worse, a waste of space— the movie is an interesting look into the value of family and respect. It may all sound predictable but Suddenly Twenty is infinitely more interesting than the clichéd “follow your dream,” YOLO theme you see in most young adult movies these days.

Plus, the film is backed up by great music. After one hour and a half of listening to iconic luk krung (vintage Thai pop) songs, the idea of the band performing their own music at the end of the story was quite underwhelming. The original song may not be as memorable as the luk krung that we heard, but it is actually quite catchy—it’ll probably stick in your head for few days or so

Cast:
Davika Hoorne
You may also like
Popular movies
We know this city. Do you?