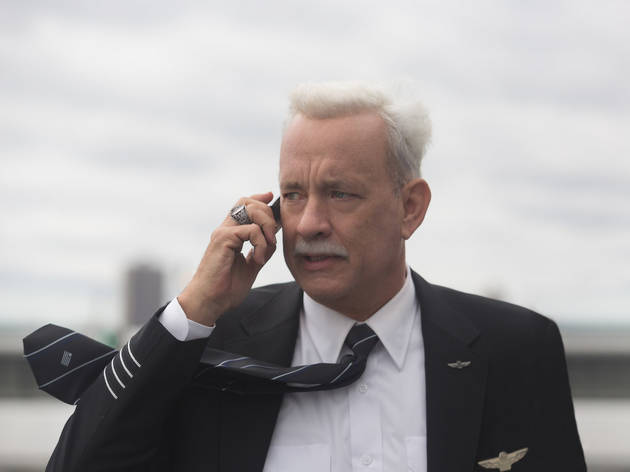 Clint Eastwood doesn't waste any time: the opening scenes of 'Sully', his stirring tribute to a great day of ultra-coordinated New York City heroism, are so frightening that it’s amazing they're about to play in multiplexes around the world. In the cockpit of his US Airways jet, Chesley 'Sully' Sullenberger (Tom Hanks, easing deeper into his Jimmy Stewart phase after 'Bridge of Spies') sees both his plane engines flame out. Scanning the horizon, he veers towards Manhattan. It’s the wrong move. He calls his wife (Laura Linney) to tell her he loves her. The plane goes down in the city, tearing through skyscrapers in a familiar fireball.
Of course, it’s just a nightmare, only in the mind of the man who, after saving all his 155 passengers by spectacularly landing on the Hudson River (beautifully staged later in a terrific action sequence), went back to his hotel to try to sleep it off. But this pushy scene is also the film's way of shocking us into respectful submission: it could have been so much worse, so let’s not get into any complexities.
Eastwood has never been apologetic about his sincerity – he grabs at emotions that lesser filmmakers would be embarrassed to attempt. But even as recently as 'American Sniper', he’s done a much better job than this of shading in the greys of what constitutes heroism. 'Sully' is so square, it’s a wonder it even gets airborne.
Hanks’s walking iceberg never thaws; the actor is never as vulnerable as he was in 'Captain Phillips'. Alongside his co-pilot (Aaron Eckhart), he has terse conversations with members of an officious investigating committee who you’ll want to hiss at for doubting him. Nobody doubts Sully in the real world. But it was a man who did this, and that guy remains unexplored. Eastwood honours a pilot's instincts, leaving the deeper film for another day.