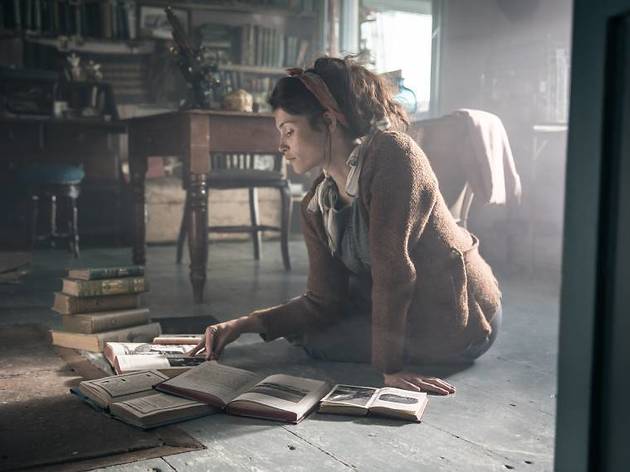 Bathed in soft light and backdropped by the white cliffs of Dover at their most picturebook, there’s a strange uncertainty at the heart of this wartime British drama: on the one hand, it’s as comfy and reassuring as a period piece set during the summer of 1940 could ever hope to be; on the other, it’s full to bursting with agonising emotions and the privations of war, of people being flung together and expected to get on with it, and grief that ends up buried, barely processed.

Playwright-turned-filmmaker Jessica Swale, who gave Gemma Arterton a plum role as a bawdy Nell Gwynn on the London stage, pens a more introspective character for her in cranky, reclusive academic Alice Lamb. Squirrelled away in a clifftop cottage and still nursing the wounds of a broken relationship with fellow academic Vera (played by Arterton’s Nell Gwynn co-star Gugu Mbatha-Raw) a decade or so earlier, Alice dedicates herself to searching for concrete evidence behind the pagan myths of English folklore.

Conflating her line of study and her curmudgeonly, get-off-my-land demeanor, the locals cruelly refer to her as ‘the beast on the beach’. But the arrival of young evacuee Frank (Lucas Bond), taken in for a week by the grumbling Alice, sparks something buried in her, his open-heartedness slowly acting on her like an elixir. She’s soon telling him about her studies of Summerland, a mythical floating island, and Arthurian sorceress Fata Morgana (‘She’s a woman in folklore – she’s bound to get blamed for something,’ she notes acidly). Here, Swale ushers in honeyed, jazz-filled flashbacks of her romance with Vera, as Alice finally starts to deal with her long-buried feelings.

Mbatha-Raw packs a lot of charisma into her few scenes, but while it’s refreshing to see a lesbian relationship baked so naturally into the fabric of a film, Vera’s character is elusive. Arterton, meanwhile, is strong as the brittle but increasingly resilient Alice, sharing an easy chemistry with her young co-star and fluctuating believably from tender guardian to a sharp-tongued Miss Havisham to the evacuee. Dixie Egerickx is sparky as Frank’s school friend, too.

But while the film’s opening half offers a soothing, sunkissed story of friendship, the second is blighted by melodramatic plot contrivances and a twist that stretches credulity. Where films like The Railway Children and Hope and Glory handle the tricky balance between children’s coming-of-age story and wartime drama sublimely, Summerland never quite decides which it wants to be and gets fatally stuck somewhere between the two. For all the sincerity of its performances, it’s a fudge that robs it of emotional impact.

In UK and select US cinemas, and US streaming sites now.