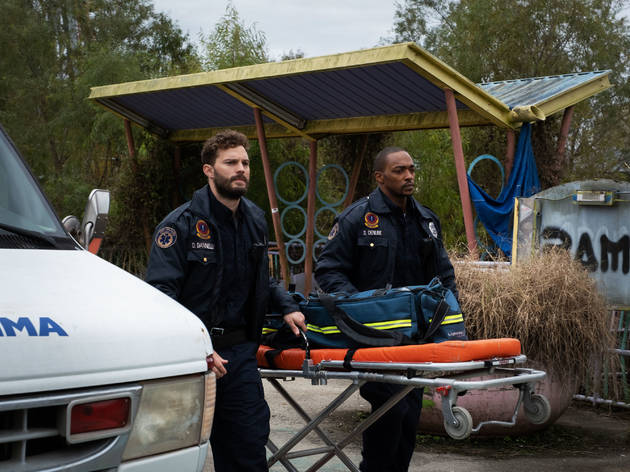 With their last sci-fi, The Endless, Aaron Moorhead and Justin Benson whipped up a seriously accomplished calling card. Between the two of them, they wrote it, directed, starred, edited, did the cinematography and probably made the coffee on set. It was a DIY indie that looked like it cost $10 million. This new film, Synchronic, has two big-name headliners in Jamie Dornan and Anthony Mackie, so it’s safe to say they’ve got someone else making the on-set joe now.

The pair’s latest offers another philosophical showcase for their brand of poetic science-fiction. In roles the filmmakers would once have taken on themselves, the actors play a pair of New Orleans paramedics: Dornan is Dennis, a cynic struggling in a volatile marriage who has a brooding daughter; Mackie is Steve, his womanising, empathetic partner. They’re friends and drinking buddies, processing the knifings, junkies and general madness of their day job through the bottom of a beer bottle.

Then Steve starts discovering sachets of a mystery time-travel drug called Synchronic at call-outs – usually, and worryingly, accompanied by gibbering users or incinerated corpses – and the film spins on its axis. His diagnosis with an inoperable brain tumour and the disappearance of Dennis’s daughter gives him all the spur he needs to sling back a pill and see what happens.

In keeping with the filmmakers’ preoccupations, it involves time travel presented with eerie soundscapes, lush visuals and a gliding camera that moves like it’s in carpet slippers. It’s enjoyably aware of its place in the pop culture canon – Back to the Future and The X-Files both get namechecks – but very much it’s own thing, zipping back and forth between past and present and smuggling in a sneaky American history lesson in the process. Mackie returns from one close shave with an invading Spaniard muttering about a ‘dick-ass conquistador’.

Unlike The Endless, though, its payoff doesn’t quite match the skilful setup. Dennis’s marital woes tip towards cliché and, once its mysteries are revealed, the time travel excursions lose a bit of their impact. Synchronic is a step up in scale but maybe a slight step back in wow factor. Still, we’ll be first in line for their next movie.