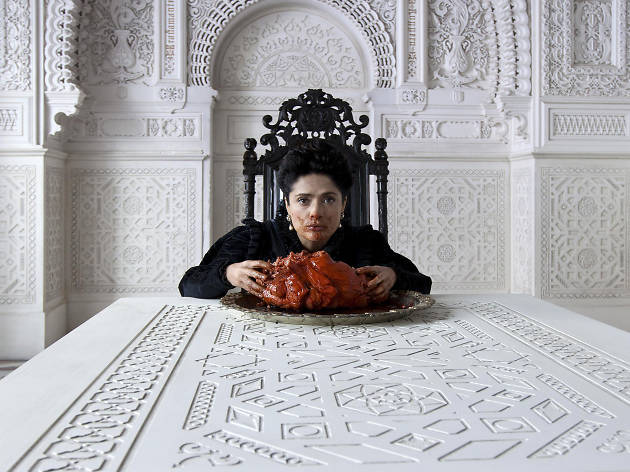 There was already something wonderfully weird and carnivalesque about Italian filmmaker Matteo Garrone's past films about the Naples mafiosi ('Gomorrah') and our modern yearning for celebrity ('Reality'). Now, the director has let his circus ringmaster's instinct flower with the bold, barmy 'Tale of Tales', a patchwork of three fantastical stories adapted from the fairytales of the seventeenth-century Neapolitan writer Giambattista Basile.

Ogres, giant fleas, albino twins, an old woman flaying her skin in search of youth and a queen feasting on the heart of a sea monster: the sheer, obstinate oddness of 'Tale of Tales' sends crowd-pleasers like 'Game of Thrones' and 'The Hobbit' scuttling into the shadows of the forest in terror. This is not kids' stuff. This is scary, solemn and not just a little silly. Garrone presents these stories exactly as they come – by inviting us into their world rather than the other way round.

What links these strange, seductive tales is a cheeky observation of the follies of power. One king (Toby Jones) breeds a flea and accidentally marries off his daughter (Bebe Cave) to a brute; another (Vincent Cassel) allows his rampant sexual desire to lead him into bed with an old crone (Hayley Carmichael); yet another (John C Reilly) dies after taking the advice of a mysterious old man on how to cure the inability of his wife (Salma Hayek) to have a child.

The design, costumes, photography and effects all combine to create a medieval world that feels mythical but not overly fantastical. The reverential tone and slow pace take some warming to, but there's much to delight as 'Tale of Tales' takes hold – not least Garrone's belief in the power of these stories to travel through the years. Where we sometimes see the cracks is via a niggling sense of this being a global pudding when it comes to the casting. American actor John C Reilly is a little obtrusive, while Frenchman Vincent Cassel hams it up. Others, though, are perfectly suited to this world: British actress Shirley Henderson manages to communicate the desperation of an old woman craving youth even from behind heavy make-up, while Toby Jones's comic timing and physicality are perfect for his role as a deluded king, father and flea-obsessive.

'Tale of Tales' might lack magic in the immediate, flashy sense, but its strange spell is altogether seductive and special.