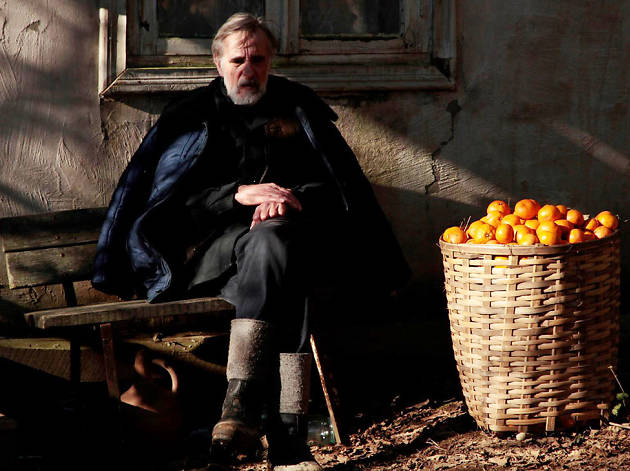 There may be no such thing as a ‘just’ war, but the folly of large-scale violence is all the more evident in combat for which no simple explanation exists. And the more complicated the conflict, the easier it is to make an anti-war movie about it: the story has much less work to do if viewers literally can’t understand why its characters are fighting. That makes the War in Abkhazia (1992-93) an ideal backdrop for a film like Zaza Urushadze’s ‘Tangerines’, a pacifist plea that distils one of the most complicated armed conflicts in recent history to a morality play that a child could understand.

Humane and reductive in equal measure, ‘Tangerines’ recently became the first Estonian film to be nominated for an Oscar (despite the fact that both its director and shooting location are Georgian). Urushadze’s film anchors its fanciful story to Ivo (Lembit Ulfsak), a taciturn old Estonian man who refuses to abandon his tangerine farm, which is stuck between Georgian forces and Abkhaz separatists. When the fighting comes to his front lawn and leaves a Chechen mercenary on the Abkhazian side (Giorgi Nakashidze) and a Georgian soldier (Misha Meskhi) in desperate need of medical care, Ivo takes both of the men into his home, indifferent to the fact that his two patients are mortal enemies.

From there, things play out as you might expect. The wounded warriors bark at each other like dogs straining on a leash, their sociopolitical differences eventually giving way to a common humanity. It’s a delicate process that’s defined by quiet tectonic shifts, and Urushadze’s excellent cast imbue their thinly drawn characters with a great deal of life, but the roles are so transparent that the film feels like more of an advertisement for peace than an argument for it. ‘Cinema is a big fraud,’ laughs one of the men, lamenting that cars don’t blow up in real life as easily as they do in the movies – ‘Tangerines’ means well, but it ultimately can’t help but prove his point.