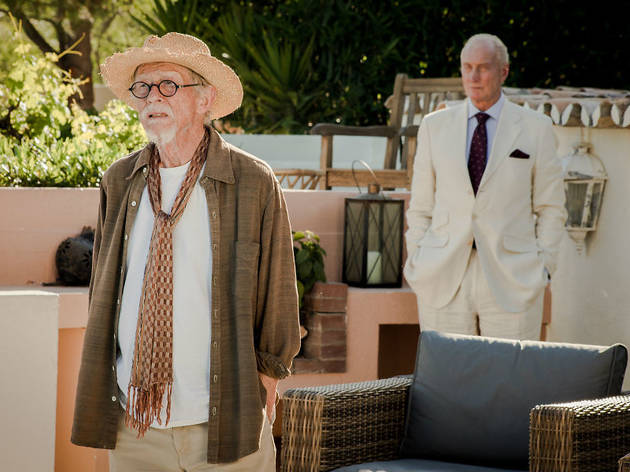 The final film from the late, great John Hurt, this solid character study offers another reminder of his towering talents.

‘That Good Night’ is built around the very last lead performance of John Hurt. Filmed after his own cancer diagnosis in 2015, the story of a dying writer refusing to ‘rage against the dying of the light’ has the air of a 92-minute long goodbye. If the film itself doesn’t match up to Hurt’s towering talents, it is still an enjoyable portrait of the final days of a world-class misanthrope.

Hurt is Ralph Maitland, a terminally ill Bafta-winning screenwriter, living in Portugal, who just wants to die. Refusing to tell his patient, much-younger wife Anna (Sofia Helin, Saga in ‘The Bridge’) the gravity of his latest diagnosis, Ralph looks to get his affairs in order, summoning his estranged son Michael (Max Brown) to make amends. When Michael arrives with girlfriend Cassie (Erin Richards) in tow, what follows is world-weary Ralph hurling insults (Hurt is brilliantly toxic in a dinner argument) and forcing everyone to breaking point.

The best scenes in the movie see Ralph visited by a mysterious stranger in a white suit (Charles Dance, who seems to have spent three-quarters of his career in linen togs). The Visitor, as he is billed in the credits, may be from a secret euthanasia society. Or he may be the angel of death. Either way, the pair mull over questions of mortality in philosophical chats. Above and beyond the debates, it is just a joy to listen to two of the great voices in English acting: Dance’s deep, velvety tones; Hurt’s booze-and-fags rasp.

Played out mostly on a villa patio, the film occasionally comes off like a more expensive episode of ‘A Place in the Sun’, and Guy Farley’s accordion-flavoured score is pretty if overly insistent. The real reason to see this movie is, of course, Hurt – by turns cantankerous, impish, helpless, charismatic and moving. In short, he elevates a pedestrian film to a good one.