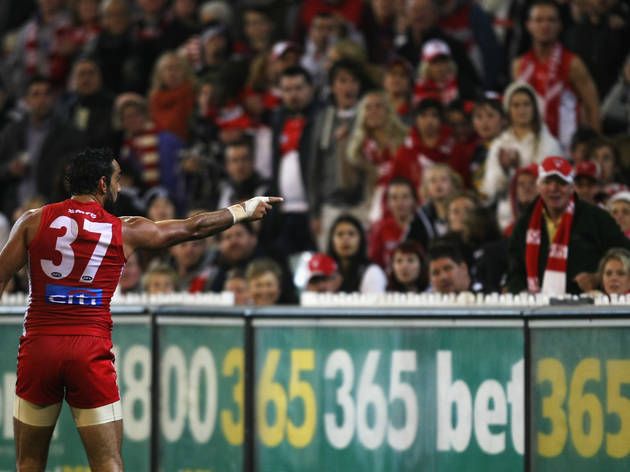 You don’t need to be Australian, know a bean about Aussie rules football or have even heard of its subject, indigenous AFL player Adam Goodes, to walk away from this moving documentary fired up and challenged. Goodes emerges as an immense figure, whose strength of character in the face of racism should see his name mentioned in the same breath as Tommie Smith, John Carlos, Colin Kaepernick and Muhammad Ali – sportsmen of colour who took a stand – as well as a powerful advocate for Aboriginal people and a bellwether test for a nation’s fraught relationship with its past and uncertain road forward.

By any measure, the now-retired Goodes was a superstar in the sport. ‘The Australian Dream’ shows him celebrating championships for his club, the Sydney Swans, winning the sport’s Brownlow Medal for player of the season twice, and hears him reflecting on a bulldog playing style that once saw him struggle through half a match with a ruptured cruciate ligament – and still come out on top. Then, at an Indigenous Round game in Melbourne in 2013, he was called ‘an ape’ by a 13-year-old girl in the stands. At Goodes’s insistence, the girl was removed from the stadium. Immediately, he was plunged into an extraordinary controversy that played out in media headlines and social media trolling and is recapped here in a montage of TV reports, awkward apologies and horrific Facebook posts.

As the doc shows, he wasn’t the first indigenous player to be abused on the pitch, merely the latest. We meet indigenous AFL player Nicky Winmar, who, in 1993, responded to racist abuse on the pitch by pulling up his shirt and pointing at his skin. His reward for giving the sport its 1968 Olympics Black Power moment? Being mocked on TV by a pundit in blackface. Goodes’s reward for taking a stand? Being jokingly compared with King Kong by talk radio DJ (and powerful AFL executive) Eddie McGuire. It makes for grim viewing.

Despite offering a plurality of voices – right-wing columnist Andrew Bolt and, surprisingly, McGuire are interviewed – ‘The Australian Dream’ isn’t interested in ‘balance’ or false equivalences. It condemns the media, society, even the sport as tacit enablers of the racism that left Winmar scarred and ended up driving Goodes out of the game. The booing comes from individual fans, but the problem is institutional.

Historic, too. The film’s writer and interviewee Stan Grant, an Australian broadcast journalist of indigenous heritage, and British director Daniel Gordon, draw a pointed thread to Britain’s colonial declaration that Australia was Terra Nullius – ‘nobody’s land’ – a move that othered indigenous people into, at best, grudging acceptance from white Australia and at worst, oblivion.

Whether it’s the filmmaking pair’s insider/outsider dynamic working to keep the story accessible to non-Aussies or just the depressing universality of Goodes’s experiences, ‘The Australian Dream’ echoes far beyond national boundaries. So, in a much more positive way, does the man himself.

Available to stream in Australia and the UK now.