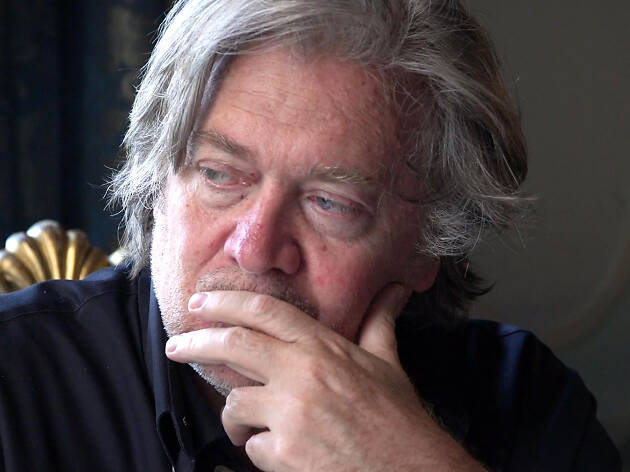 If you can handle an hour and a half with Steve Bannon, this fly-on-the-wall doc will reward you with some surprising insights into the populist svengali.

Fair enough if you’d take a hard pass at the idea of spending 90 minutes in the company of Steve Bannon, President Trump’s former adviser and the shaggy, apparently disintegrating cheerleader for emerging popular nationalists the world over. This fly-on-the-wall doc follows Bannon in 2017 and 2018 as he builds alliances with European politicians, including Nigel Farage and representatives of France’s renamed National Front, and campaigns for the Republicans in the lead-up to the 2018 mid-terms.

The strength of director Alison Klayman’s intimate, unobtrusive film is its access. She’s there on private jets, in fancy hotels and airless meeting rooms – totems of privilege that Bannon himself realises don’t sit so easily with his endless professions of sympathy for the lot of everyday working folks. ‘I’m gonna get so crushed in this film,’ he smirks.

You get the sense that Bannon wants to be liked by everyone, not just his assumed target constituency, and that’s probably why he’s let a documentary filmmaker into his orbit: it flatters him. Why else, too, does he entertain the same journalist, The Guardian’s Paul Lewis, twice in the film? Even when Lewis slams him for a ‘dog whistle’ approach that plays into the hands of anti-Semites, Bannon just smirks and pats Lewis on the back like an old pal.

You might think that the doc gives Bannon too much airtime, but there’s plenty here for the observant viewer to get their teeth into. Certainly you’re left with the impression of a man flirting extremely dangerously with bad ideas. But you also get the sense that Bannon is driven less by ideology and more by being successful and enjoying the gravy train. ‘I’m about one thing, I’m about winning,’ he says. After spending all this time with him it feels like an extremely hollow boast.