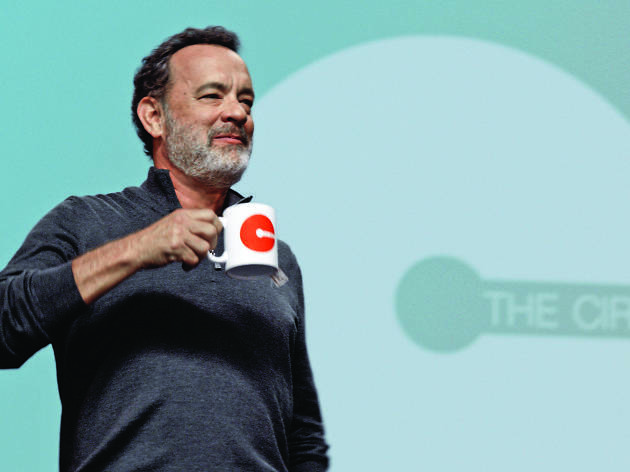 Emma Watson and Tom Hanks star in an internet-company dystopia that plays like yesterday's software update.

In its early stretches, when The Circle feels much smarter than it turns out to be, a class-conscious nightmare shapes up, one about sleek toys and the not-so-subtle price we pay for them. The movie is set at one of those superwealthy internet companies, the kind with a luxurious California campus, nightly rock concerts and docile staffers. Our hero, Mae (Emma Watson, more doe-eyed than usual), arrives as we do, beguiled and slightly stunned. Leaving behind her stultifying customer-service job in a beige zone of cubicle-divided misery, she finds herself lured to a different kind of banality, where every “Circlist” on the payroll must maintain a robust social-media presence or be shamed. Mae still answers phone calls but now she’s surrounded by a bevy of stunning colleagues (to use Netflix’s actual in-house term): young, attractive types who wear T shirts to work, attend “Dream Friday” auditorium presentations and enjoy high-tech health benefits.

As written by Dave Eggers in his 2013 novel and translated by director James Pondsolt (The End of the Tour) into an uneven, ultimately disappointing satire, The Circle saves its most cutting barbs for today’s cultlike corporations. Via just a handful of scenes, Tom Hanks nails the company’s slippery ethos as Eamon Bailey, the Circle’s cofounder: an aw-shucks tech visionary clad in dad jeans and accessorized with a coffee mug. He’s Steve Jobs but with a deeper, more pernicious plan to unleash tiny microcameras on the world, to route out the “tyrants and terrorists.” There’s no comment from him on who those evildoers might be replaced by, but to observe his scowling cofounder, Tom (Patton Oswalt), who wears his company’s access card on his lapel like a general’s medals, it’s not hard to figure out. Composer Danny Elfman’s percolating techno music swells, and the film—if never as sharp as TV’s Silicon Valley—approaches the electric vibe of The Social Network.

What a drag it is, then, to see The Circle stall in its tracks like a crashed hard drive. First off, our hero, Mae, turns out to be especially gullible (is there anything worse than undermining a main character’s intelligence?). She agrees to go fully “transparent,” wearing Eamon’s cameras 24-7 and broadcasting her life to a worldwide audience of snarky commentators. Suddenly, she’s like Patient Zero: an internet celebrity shunned by her ex-boyfriend and lolling around the grounds with a Kool-Aid-guzzled grin on her face. Ponsoldt doesn’t know how to develop this section and, as the film advances its more adventurous ideas about privacy, it suddenly feels like a lecture written by a twelve-year-old. Worse, The Circle ends precisely when it’s getting interesting; you’ll wonder if the production simply ran out of money. Movies about the dangers of rampant interconnectivity are welcome in this day and age, but let’s please make them a little more courageous.