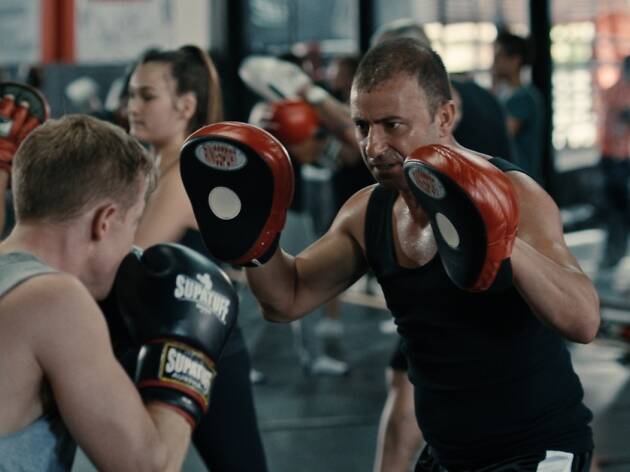 Sydney’s wild western suburbs were sparsely represented in Australian cinema when crime thriller The Combination came along in 2009. Made in response to the Cronulla riots and without any government funding, it found an appreciative audience for its simmering mix of multiculturalism and crime. Now writer-star George Basha and director David Field have re-teamed for the sequel, which arrives at a moment when racism seems on the ascendant. Basha’s Lebanese-Australian hero, John Morkos, hasn’t noticed that the promising Anglo boxer he’s training, Mark (Andre de Vanny), has a brother who’s part of a white supremacist gang that has declared war on Asians and Muslims. Meanwhile a flamboyant drug baron, Nas (Johnny Nasser), is trying to find an ice-dealing friend of John’s who owes him $100,000. John’s an ex-con and doesn’t want to be pulled back into a life of violence, but with xenophobic crazies closing in on one side and trigger-happy criminals on the other, fate has other plans.

Amid the mayhem, the movie finds time for a culture-clash romance: John begins dating Amira (Abbey Aziz), whose family disapproves because John’s not Muslim. But any reservations about the film’s believability are easily set aside when Basha’s screenplay is so unpretentiously entertaining, with a neat line in blunt, Ocker dialogue (“I know he’s a dickhead, but he’s still my brother,” is Mark’s hilarious analysis of his dilemma). The performances are good too: Basha has the charisma to come off as a kind of Vin Diesel-in-Parramatta; Aziz is a luminous heroine; Nasser plays the villain nice and big as the situation demands; and the late Tony Ryan is perfect as John’s colleague and mentor Wes, an Indigenous man for whom dealing with racists is nothing new. The Combination Redemption may be every bit as overreaching as its unwieldy title suggests, but it’s hard not to enjoy the ride.

Director:
David Field
You may also like
Popular movies
We know this city. Do you?