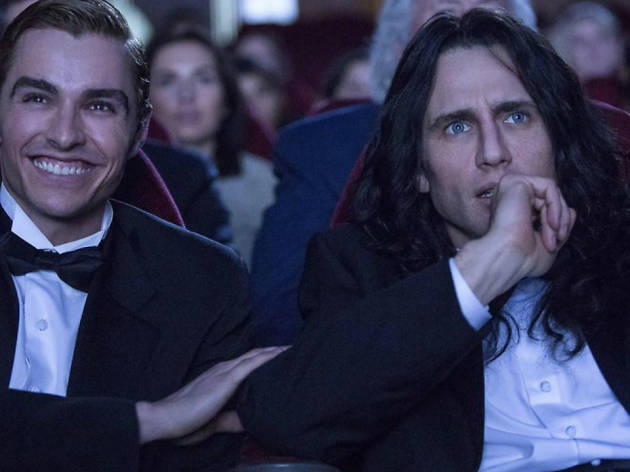 The world's worst film gets an affectionate making-of dramatization that's half as weird as the real thing.

First, a caveat: If you’re obsessed with 2003’s hypnotically inept romantic drama 'The Room' – and its mysterious, lank-haired auteur Tommy Wiseau – go ahead and add five more stars to that rating. Throw in an additional fistful of spoons, a football and an 'Oh, hai, Mark.' And if you’ve made it a habit to periodically check out the midnight screenings that have become ritualistic viewing experiences for die-hard dialogue quoters, rest easy knowing that 'The Disaster Artist', a warmhearted comedy about 'The Room'’s uneasy genesis, is very much for you.

If all the above is gobbledygook, though? Know that you’re in for a movie that flogs its fan service so vigorously (forget about a wink – this is a squint), it barely remembers to be anything more than a mildly weird story of friendship and betrayal. Maybe that’s all it needs to be. Dave Franco plays wannabe actor Greg Sestero (writer of the tell-all book on which this is based), a blandly handsome San Francisco suburbanite who falls in with the secretive, much-older Wiseau (James Franco, building an eerily accurate impression based mainly on 'The Room' and its creator’s inscrutable persona, but nothing deeper). With Greg’s nervous mom in the rearview mirror, they drive off for Los Angeles, where they spend Tommy’s millions on an indie film of such terribleness, it touches off a garbage fire of ego and resentment.

Scenes that recreate 'The Room'’s shoddy sets and porn-grade acting have an insider appeal – it’s the vibe of nervous careerists wondering how they’re going to scrub this gig off their résumés. But the central relationship is undernourished; it’s no 'Ed Wood', a film that infused its crazy crusade with regret and surrogate paternal affection. The Francos, meanwhile, end up with a film about loneliness and loyalty, a sweet takeaway but nowhere near as disquieting as the reality of Wiseau’s psychological barricading (undiagnosed though it may be). The laughs of 'The Disaster Artist' really belong to him; had Wiseau made a movie this square, he wouldn’t be mocked so lovingly.