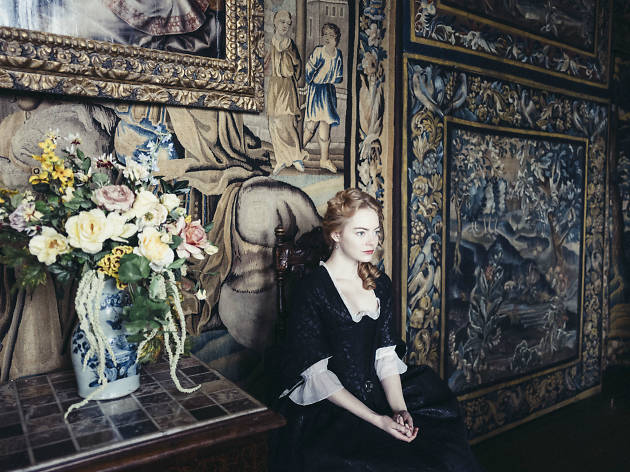 Emma Stone and Rachel Weisz spar for the affections of their queen in Yorgos Lanthimos's swooningly rude period piece – a royal flush.

We’re watching an extremely luxe pocket of 18th-century regal life in ‘The Favourite’, which means bewigged fops are scheming, the ducks are running (these people don’t lack for strange competitive indoor sports) and the offscreen organist is going for baroque. Even Stanley Kubrick knew to lay off his fish-eye lens once in a while. But Greek-born director Yorgos Lanthimos can’t say no. He warps his period chamber piece – loosely based on the highly competitive court of the unstable Queen Anne – into a Lewis Carroll semi-comic nightmare, piling cattiness upon cattiness.

And what’s not to love about that? The constant visual and verbal bitchery feels like a pent-up release of something churning just under the surface of polite life. If this is your first Lanthimos movie, welcome. Know that you’re a little late to the party: Two of his prior films, the psychosexual meltdown ‘Dogtooth’ (2009), about a family that’s never allowed its grown-up kids to leave the house, and the equally vicious ‘The Lobster’ (2015), went darker and deeper than ‘The Favourite’, Lanthimos’s first that he hasn’t personally written. But like its predecessors, the new one has a sneaky empathy, sitting oddly amid so much bad behavior.

What makes ‘The Favourite’ work are its women – who rule, both literally within the movie and outwardly, dominating our enjoyment. Unlike the similarly set ‘Barry Lyndon’ or ‘Dangerous Liaisons’, which had strong female characters toppled by the whims of strutting cocks, Lanthimos’s latest makes men extraneous, building a potent hothouse atmosphere swirling with secret desires and the hope of being petted. At its wobbly center is, of course, Anne (Olivia Colman, marvelously fickle and cryptic with her own true feelings), who suffers from gout and the deeper insecurity of 17 failed pregnancies. (Her living quarters are strewn with what we’d now call support bunnies.) Adding plainspoken companionship – and, we learn, much more in private – is Lady Sarah (Rachel Weisz), on hand to tell the queen that she looks like a badger.

When Sarah’s distant cousin, Abigail (Emma Stone), appears, she’s been dragged through the mud: a victim of her father’s misspent fortune and diminished name. She gets a job as a scullery maid but, smiling coyly in the queen’s presence, you know she won’t be scrubbing floors for long. Lanthimos is concerned with charting these two trajectories, one downward, the other upward. You’ve seen Weisz curl her lip before (maybe even in ‘The Lobster’), but Stone makes the deeper impression, especially after being elevated to the high spot, where she becomes a lacquered plaything. Ultimately, Lanthimos doesn’t know what to do with either of them, shrewdly developed from actual historical figures who didn’t leave behind much of a climax. ‘The Favourite’ is about the gossipy retelling, anyway, so who needs an ending?