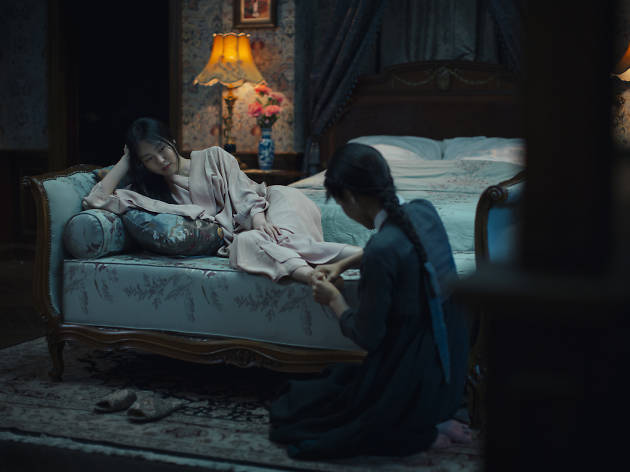 Decadence is both the subject and the style in ‘Oldboy’ director Park Chan-wook’s elegant, intensely romantic adaptation of Sarah Waters’s spicy bestseller ‘Fingersmith’. Shifting the action from Victorian England to pre-war Korea under Japanese rule, Park has created a film that delights in ornate furnishings, flowing gowns and sensuous sexual imagery, but reminds us that these things are just surface – the stuff that really matters is always kept hidden.

Sook-hee (Kim Tae-ri) is a proper Dickensian orphan: raised by a Fagin-like madam on the streets of Seoul, she’s an experienced thief and con artist. So when smooth huckster Fujiwara (Ha Jung-woo) needs an eager young crook to impersonate a lady’s handmaiden as part of a scam he’s planning, Sook-hee steps up. Her mission: to encourage the innocent, unworldly Lady Hideko (Kim Min-hee) to disobey her cruel uncle Kouzuki (Jo Jin-woong) and run away with the dashing Fujiwara – bringing her fortune along with her, of course. And then Sook-hee starts falling in love…

The cinematic equivalent of drinking three glasses of champagne in the bath, ‘The Handmaiden’ is a film to luxuriate in. Park has always been a visual master – even his infuriating American debut, 2013’s ‘Stoker’, had that going for it – but he’s outdone himself here. Waters’s labyrinthine plot is handled with the utmost care, and the characters – particularly the seemingly fragile Hideko – are beautifully sketched and performed.

But it’s in probing beyond the pretty exterior that ‘The Handmaiden’ truly succeeds: it may seem to be a film about wealth, artifice and cruelty, but what resonates is the love story, and the liberated ideals underpinning it (the film’s stark anti-pornography stance is unexpected but strangely affecting). It doesn’t all work – the pace can be a little slow, and there are definitely points where Park tries to have his tasty feminist cake and eat it. But this is smart, sumptuous and wonderfully indulgent, best watched on a wet Sunday with an entire box of chocolates.