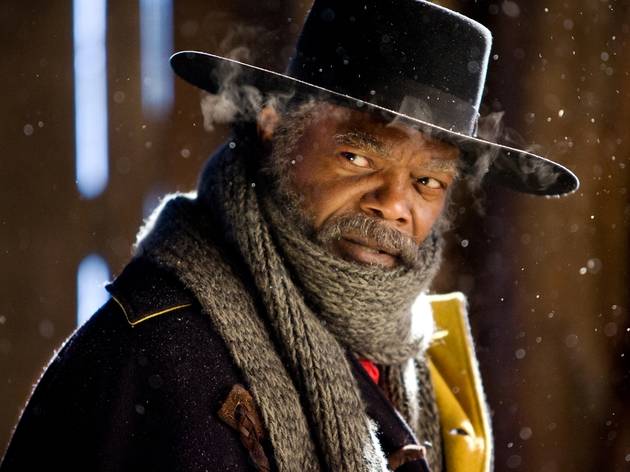 No matter how Quentin Tarantino arms his characters – with katana swords (‘Kill Bill’), shotguns (‘Pulp Fiction’) or baseball bats (‘Inglourious Basterds’) – their chief weapons are words. That’s just how Tarantino rolls, and even as ‘The Hateful Eight’ starts off in the wintry trappings of a post-Civil War western, we’re soon essentially in a series of rooms: a stagecoach, then Minnie’s Haberdashery, a drafty Wyoming outpost where spit will fly as gloriously foul-mouthed arguments break out.

This is Tarantino’s most pleasingly claustrophobic film since ‘Reservoir Dogs’ and has a parlour-whodunnit theatrical intimacy to it. There’s zero need for it to have been shot in sumptuous 70mm. Let’s call that the gimmick it is and move on to the smart talkers he’s assembled for our amusement. Bounty hunter John Ruth (Kurt Russell, summoning his A-grade John Wayne drawl) escorts a wild-eyed prisoner, Daisy Domergue (Jennifer Jason Leigh, doing wonders with very little), to the gallows and a huge payday. But a fearsome blizzard approaches, and after Ruth allows old war acquaintance Major Marquis Warren (Samuel L Jackson) and ex-Confederate sheriff Chris Mannix (Walton Goggins) to ride along to the relative safety of a remote outpost, there’s a strong hint that an escape plan is afoot.

Before it unleashes its violent wallop of a second half, ‘The Hateful Eight’ simmers along like pots of coffee being brewed onscreen. Composer Ennio Morricone’s seesawing score – his first new Western work in decades – sometimes brings to mind Tarantino fave Sergio Leone. But the real ancestor to the film is John Carpenter’s 1982 ‘The Thing’, another thriller percolating with close-quarters paranoia and chat. It doesn’t quite work altogether: serious conversational detours into racial injustice feel a little too on the nose (as do the periodic, unnecessary punches to Leigh’s bloodied face). But it’s as pure an expression of Quentin Tarantino’s voice as he’s ever mustered, easy to savour, even as the taste leaves a hint of nasty bitterness.