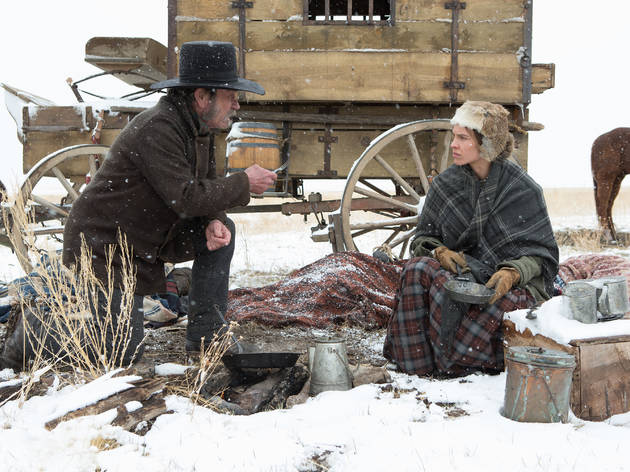 Nineteenth-century Nebraska is a grim place in actor-director-co-writer Tommy Lee Jones’s ineffective nineteenth-century Western – especially for Mary Bee Cuddy (Hilary Swank), a plain-looking spinster unlucky in love, if still stalwart in spirit. She can hold her own among the gruff and condescending men of her small frontier town. But three other ladies (Grace Gummer, Mirando Otto, Sonja Richter) aren’t so lucky, their fragile minds succumbing to the harsh realities of life on the American verge. There’s no place for madwomen here, so Cuddy volunteers to take the trio east to Iowa where they can be sent home to their families. She could use some help, of course, so fate fortunately puts disgraced soldier and claim jumper George Briggs (Jones) in her path.

So begins a testy, unlikely friendship, and one you feel like you’ve seen so many times before, despite everyone's best efforts. Jones, directing his second feature after 2005’s 'The Three Burials of Melquiades Estrada', has an eye for sprawling Western landscapes (cinematographer Rodrigo Prieto gives the images the feel of burned-out early photographs). Yet the script – which Jones, Kieran Fitzgerald and Wesley Oliver adapted from Glendon Swarthout's 1988 novel – shifts uneasily between tragedy and comedy: a woman throws her baby into the pit of a latrine one moment, while Briggs and Cuddy trade barbs like an open range Tracy and Hepburn the next.

It doesn’t help that Swank never finds a way into this highly unappealing character, or that Jones (mostly phoning in the pitiable surliness) avoids delving very deeply into the story’s feminist undercurrents. Every scene with Cuddy and this daft trio feels off – heavily symbolic jibes against patriarchy in need of much stronger execution. Jones is on surer footing with the side characters: Tim Blake Nelson brings some welcome nuttiness as a horned-up kidnapper. James Spader clearly relishes his two scenes as an officious hotel owner. (He and Jones crackle together.) And that grande dame of American cinema, Meryl Streep, makes the most of her cameo as a preacher’s wife who can act kindly with her eyes shut.