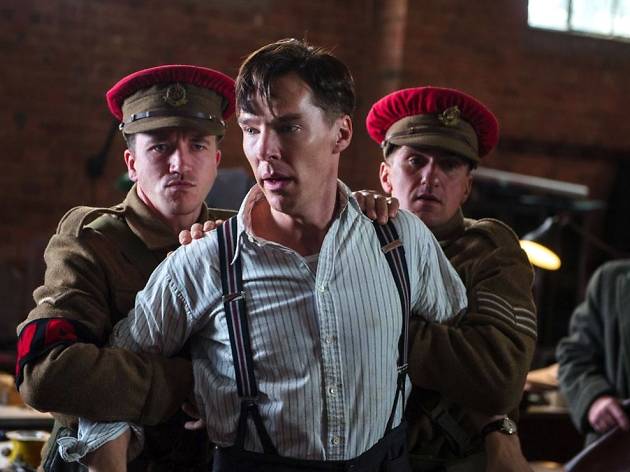 Hidden codes, secret meanings and mixed messages pulse through the reliable, old-fashioned, buzzing copper wires of true-life British period drama ‘The Imitation Game’. Snappy and not too solemn, but perhaps not as much of a psychological puzzle as it could have been, the film gives us key episodes in the tragic life of Alan Turing. He was the mathematician whose biting, anti-social intelligence briefly ran in step with the needs of the British war effort in the 1940s when he was employed to help break the Nazi Enigma code at Bletchley Park.

Turing’s wartime achievements – kept under wraps for years – counted for nothing when his homosexuality fell foul of the law in the early 1950s, sending an already fragile personality into freefall. Benedict Cumberbatch, no stranger to roles with a hint of sociopathic genius, delivers a performance more complicated and knottier than the film around him. The script tends to spell out its themes, repeating a corny slogan: ‘Sometimes it is the people who no one imagines anything of, who do the things that no one can imagine.’ Cumberbatch, though, defies the film’s simplicity. His Turing is awkward, determined, at times comically stand-offish (a description that could just as easily apply to his Stephen Hawking, Julian Assange and Sherlock Holmes).

The film gives us three periods in Turing’s life: his schooldays, wartime service and final years in the early 1950s. We intermittently hear Turing on voiceover telling his life story to a suspicious police detective (Rory Kinnear) whose curiosity after a break-in at Turing’s home in 1951 leads to him being charged with gross indecency. Yet ‘The Imitation Game’ is coy on the three pillars of Turing’s story – sex, science and suicide – preferring to nod to each without getting into the messy details.

Instead, the film lingers on the war period and the Bletchley years, where it’s most comfortable as an ensemble, getting-the-team together drama. Director Morten Tyldum (‘Headhunters’) and writer Graham Moore sketch out Turing’s initial conflicts with his Bletchley colleagues (led by Matthew Goode, with Charles Dance and Mark Strong playing the bosses) and his friendship with fellow codebreaker Joan Clarke (nicely underplayed by Keira Knightley), who was briefly his fiancée. But perhaps the most moving, enlightening and sweetly played scenes are of Turing’s schooldays when we see a young Turing (played with tenderness by the excellent Alex Lawther), fragile, stuttering and in love with a fellow pupil. Less delicate is a later scene where Turing is effectively presented as being in love with his big, awkward proto-computer – named Christopher after his schoolboy romance.