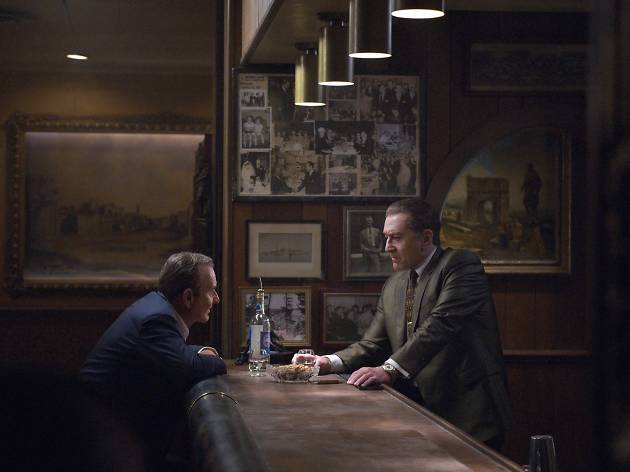 Martin Scorsese pulls off a killer curveball at the beginning of the frequently electrifying, if overstuffed ‘The Irishman’. As The Five Satins’ ‘In the Still of the Night’ plays, the camera creeps forward... only this time it’s not through the Copacabana nightclub à la ‘Goodfellas’, but down a nursing home hallway. Is this where Scorsese’s gangsters end up? Only the unlucky ones, the film suggests. Adapted by Steven Zaillian (‘Schindler’s List’) from 2004 crime memoir ‘I Heard You Paint Houses’, the 209-minute ‘The Irishman’ isn’t about still nights so much as the dying of the light that comes with old age. It’s also about the belated surge of guilt that comes at the end of a life of crime.

At least it is, eventually. When we first sidle up to the wheelchair-bound Frank Sheeran (Robert De Niro, building a performance that gets better and better), he’s a white-haired old-timer looking back on his life. Just for a second, you wonder if he’s rambling to himself. He steers us back to a time in the late 1940s when, as a married World War II vet and union truck driver, he meets mafioso Russell Bufalino (Joe Pesci, terrific) on the side of a Pennsylvania road. It doesn’t matter how many times Pesci calls De Niro ‘kid’ (and it’s several), nothing will sell you fully on Scorsese’s biggest gamble: digitally de-aging his cast so that they can play their own thirtysomething characters. Everyone looks unnaturally pink and puffy-faced, like 50-year-olds who have recently discovered hair dye.

After a while, you adjust, or rather, you get tired of probing the slightly off evidence of your eyes. There’s a lot of fun to distract you. ‘The Irishman’ is a movie of point-blank gunshots to the face and diner sit-downs, of bloody steaks and cigarettes and insults. As the plot settles into the relationship between Sheeran, a murderer for hire, and union leader Jimmy Hoffa, Scorsese springs on us his most wonderful surprise: a bug-eyed, verbally unleashed Al Pacino, having a ball as a man not quite drunk on his own power, but definitely well over the legal limit.

Scorsese has the time of his life letting the actors tear into a plethora of dumb arguments, often emerging with unexpected comic gold. There’s a fight about a purchased fish. What kind was it? How do you not know? Did you just ask the guy for ‘fish’? Another one is about the etiquette of wearing shorts to a high-stakes meeting. The overstuffed padding of ‘The Irishman’ isn’t its talk, though, but its tangents – duller echoes of earlier, better Scorsese moments. There’s too much driving and a couple too many whackings.

Nothing this misshapen ever flies – Scorsese once managed to make a movie called ‘The Aviator’ that was similarly overburdened – yet his all-over-the-place enthusiasm plays well against the material’s morbid mood. But in its final hour, ‘The Irishman’ becomes something truly memorable: a film about broken trust – to family and God. De Niro’s Sheeran, like the spiritually wrecked monks of Scorsese’s magnificent ‘Silence’, can’t even properly express his pain. When ‘The Irishman’ becomes about doubt and self-reflection, it’s as personal as a film gets.