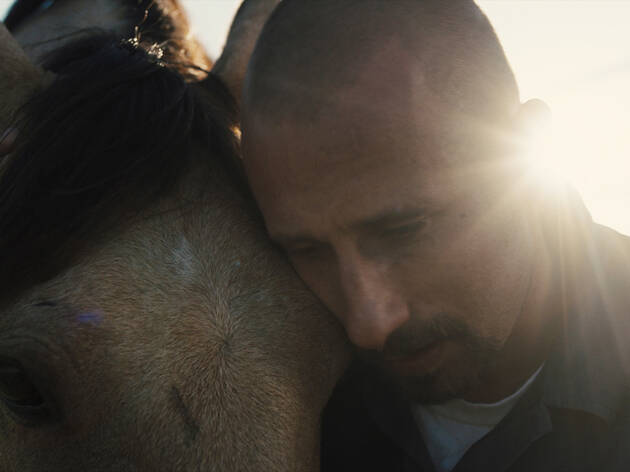 Man and horse bond in a generic indie that doesn't stray too far afield from expectations.

Even though the plot is inspired by a real-life prison program—one that pairs troubled inmates with wild horses—The Mustang sometimes plays like pure high-concept Hollywood: One’s trapped in a cage, prone to mood swings and stomping; the other is a horse. “I’m not good with people,” growls Nevada convict Roman Coleman (Rust and Bone’s Matthias Schoenaerts, channeling his inner Charles Bronson), as if anyone still needed a clue as to their interchangeability.

Still, you can’t help but be swept up by the sincerity here—that and the sight of a hard man softening to a sympathetic nuzzle. (This is some excellent equine acting.) The Mustang is leagues beneath the recent The Rider or Lean on Pete, both superior in terms of articulating silent human-animal relationships that fulfill larger psychological needs. But after Roman gets out a little of his violence (who punches a horse?), the movie settles into appealing stretches of purely visual storytelling: the kicked-up dust hanging in the setting sun, the line of prisoners sometimes resembling a posse of old-school heroes riding into their own Western. Between this movie and Beautiful Boy, Belgian cinematographer Ruben Impens is capturing images of a Terrence Malick–worthy natural gorgeousness.

Too coyly, the script makes us guess at Roman’s crime, for which he has already served 12 years. And while Schoenaerts, who conveys internal pain marvelously, thrives in an underwritten part, the rest of the cast doesn’t share his resourcefulness. Gideon Adlon plays Roman’s pregnant daughter with a single tear-rimmed expression of accusation (their reconciliation is telegraphed early), while Bruce Dern, after all these decades, still can’t dial down the orneriness in his Miyagi–like role as the program’s boss. Making her feature debut after a similarly themed short film about a prisoner adopting a rabbit, director Laure de Clermont-Tonnerre has pet empathy down cold.