Film, Family and kids
2 out of 5 stars 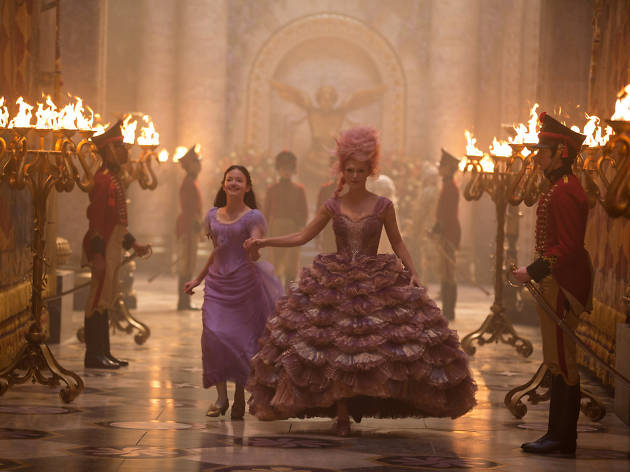 This visually stunning ‘Nutcracker’ should have been an easy win but the confection falls down flat.

There’s a reason why ‘The Nutcracker’ is almost always performed as a ballet. More Terry Gilliam than Walt Disney, ETA Hoffmann’s original fairytale is a dark story about a young girl, a dashing nutcracker soldier, some transformative magic and a greedy Mouse King. So, in choosing this for their next Christmas extravaganza, the Mouse House has set itself quite a challenge – and it’s one that just doesn’t come off.

All the elements are there: the production design and special effects really do make everything magical, Mackenzie Foy is the right mix of thoughtful and doughty as the heroine, and a cast boasting Keira Knightley, Helen Mirren, Morgan Freeman and Richard E Grant is hardly short of chops. But the story is a tangled mess.

A young girl, Clara (Foy), mourning her dead mother, must unlock a mechanical egg to find the last Christmas gift she left behind. Before she can do so, she must attend a Christmas ball hosted by her godfather (Freeman), who might just have the key she needs. But to find it, she must venture down a dark passageway, through a fallen hollow tree and into a snowy landscape.

On the upside, Jack Whitehall has a nice comedic turn as a quill-pushing soldier trying to fill out a mouse-related questionnaire and the beautiful ballet sequences will make this one for dance lovers to revisit. But perversely, it’s a 12A, so it may not have the same effect on families. The Mouse King – actually a writhing body of mice all working together as one moving mass – is the stuff of children’s nightmares, as are Mother Ginger’s (Mirren) grotesque spinning clowns, one of the original elements taken from Hoffmann’s dark tale. Our advice? Leave this nutcracker on the shelf where it belongs.