The Shape of Water

Film, Fantasy
3 out of 5 stars 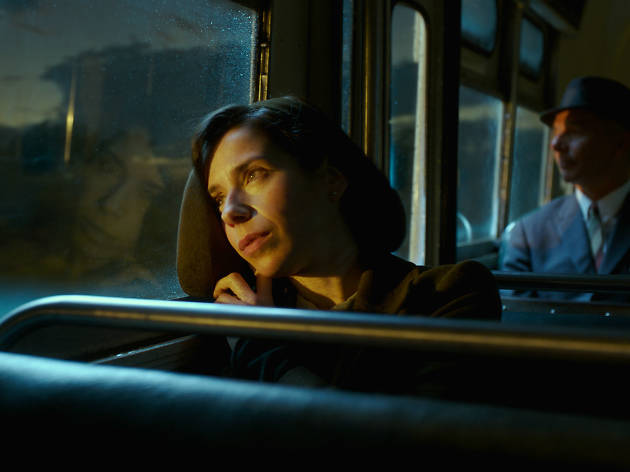 Reliably, director Guillermo del Toro’s mind goes to squishy, sexual places. He’s a true voluptuary, not just the guy behind those bony creatures from 'Pan’s Labyrinth' but also, per last year’s Crimson Peak', a believer in grand, melodramatic flourishes. Del Toro’s latest, the tremblingly romantic 'The Shape of Water', should be an orgasmic flood for his fans, who want their fantasies served with a side of adultness. If you can imagine an aggressively adorable (and somewhat effortful) version of 'Amélie' in which our hero sleeps with 'The Creature from the Black Lagoon', then you'll totally be feeling this.

It’s 1962 and Elisa (Sally Hawkins, delivering a flow of enraptured expressions) is a mute loner who works – somewhat improbably – in a secret government facility in Baltimore. (Go with it.) Even though Del Toro hammers you over the head with every green-hued retro detail, try to stay focused on Elisa. She loves watching musicals on her tiny TV, and she adores her closeted gay neighbour, an illustrator named Giles (Richard Jenkins, also the film’s narrator). Basically, though, her life is empty, until a metal tank is wheeled into her office, containing an organism that could be a 'god,' a merman or an alien. Made of sinewy muscles and quivering scales (he’s performed, balletically, by del Toro regular Doug Jones), it turns out this 'asset' is actually Elisa’s Romeo, and – as she starts to flirt with the mystery man, feeding him hard-boiled eggs and pressing up against the glass – 'The Shape of Water' floats to a magical place of perfect bliss.

That’s the part that works gorgeously – their weird mutual attraction and Alexandre Desplat’s murky underwater score – and I don’t know if I have the heart to say that everything else is a little stiff. As sophisticated as del Toro can be in blending the supernatural with the sexy (the eroticism here will catch you off guard), this film’s Cold War intrigue plays like a high schooler’s book report. Scowling Michael Shannon embodies yet another meanie: a brutal husband and government agent who stands in the way of blooming love. Russians skulk; paranoia looms; there are tense showdowns in diners that evoke harsh Civil Rights–era realities. This political layer doesn’t feel earned. Didn’t del Toro realise that interspecies romance with an illegal alien would be timely enough? Regardless, don’t let this overly lacquered context keep you away. 'The Shape of Water' is a movie of too many ideas. For that reason alone, it drinks like a bottomless glass of velvety wine.