The Zen of Bennett 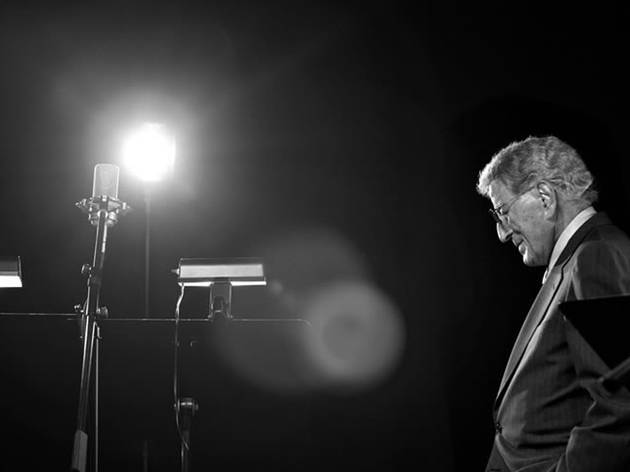 We should all be so lucky to be Tony Bennett, an icon of classic crooner-cool and keeper of the American-standards flame. Given that only Anthony Dominick Benedetto has the good fortune to occupy the role, however, the best we can hope for is to spend time in the jazz singer’s company. Unjoo Moon’s portrait is only too happy to oblige such wishes, as it trails the vocalist while he records his 2011 Duets II record. Imagine your favorite elderly uncle waxing on about life, art and the intersection between the two, and you’ve got a good idea of the music doc's tone. This assumes, of course, that said relative has anecdotes about working with Duke Ellington and spends his afternoons cutting tracks with a giddy Lady Gaga.

Given that this is a family affair (the project was “conceive, created and produced” by son Danny Bennett), you expect that things won’t get too critical, even with occasional scenes of Tony arguing over arrangements or semantics (don’t ask him about demographics) that don’t present him in the most flattering light. And the arbitrary insertion of black-and-white footage suggests Moon is more interested in channeling a bygone sense of style—when men always wore ties and things were in monochrome, dammit!—than in going too deep. But then comes the money sequence: A clearly frazzled, possibly fucked-up Amy Winehouse stands next to Tony, blowing takes of “Body and Soul” and on the verge of tears. Trying to ease her nerves, he innocuously mentions Dinah Washington; soon, Winehouse is gloriously ripping into Washington’s phrasings as he’s egging her on. Watching the elder statesman spin ring-a-ding wisdom is one thing; witnessing his generosity to another artist who couldn’t handle her own talent, however, speaks volumes about what actually lurks under his placid, seemingly imperturbable surface.