Film, Musical
Recommended
4 out of 5 stars 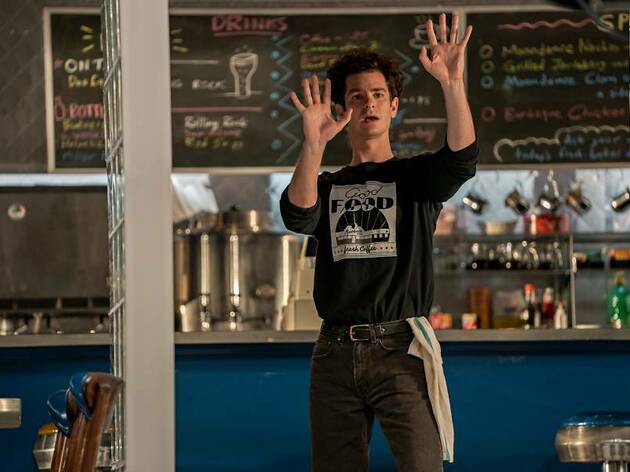 Trigger warning for everyone born before 1990: This musical contains repeated discussion of the horrors of turning 30 which may cause distress or embarrassment. In its defence, author and protagonist Jonathan Larson tragically died at just 35, immediately prior to the premiere of his best-known work, Rent, and soon after writing this semi-autobiographical piece. For Larson, time really was running out – and that’s a sense that Hamilton author, and now debutant movie director, Lin-Manuel Miranda captures expertly.

An endlessly moving, entirely convincing Andrew Garfield plays Larson, working in a diner by day and slaving over his sci-fi musical Superbia by night. We join him in the week before its first ‘workshop’ performance, as he deals with the pressure of this eight year, make-or-break project nearing its climax. He’s trying to write one final song for the piece (as recommended by Bradley Whitford’s Stephen Sondheim, a mentor to the young Larson), negotiate relationship changes with his dancer girlfriend Susan (Alexandra Shipp) and somehow raise the money to pay for the workshop’s performers. Meanwhile his friends are in flux. Previously struggling artists are giving up their dreams for secure jobs and others face AIDS diagnoses, at the height of that epidemic.

It’s a lot of passion and restless, sometimes misdirected energy to channel through this film, but Miranda marshalls it effectively, communicating Larson’s talent and drive without obscuring the fact that he could, sometimes, be a bit wearisome about it. Opening shots from Rent give a sense of context to his work and endow him with a sense of destiny that the show, initially written as a largely one-man performance piece, lacked at the time. But while he opens out the canvas, Miranda doesn’t get bombastic about it. The songs are catchy, but there are few big choreographed numbers, little use of fantasy and not a spangled costume in sight.

Apart from one scene, where seemingly every Broadway star ever turns up to sing about brunch, this is a relatively grounded musical. With its cold, leaking apartments and freezing New York winter winds, there’s no sense of failure being romanticised. Garfield’s Larson may be living La Vie Bohème, but he’s hungry for success, recognition and yes, a better living space.

Artistic integrity matters enormously to him, but he is tempted by a more conventional life – and that’s the dilemma that shapes his journey. We know he’ll find success, but he can’t be sure, and it’s in the push and pull of art and commerce that Manuel finds his drama – and Larson eventually finds his feet.

In US and UK theaters now. Streaming on Netflix Nov 19.