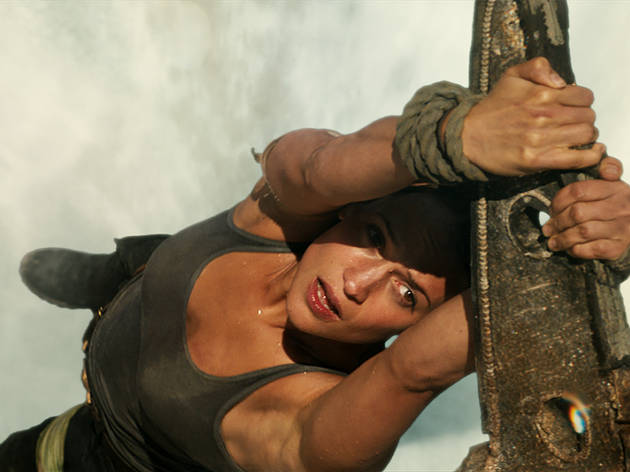 Alicia Vikander makes for a scrappy, spunky Lara Croft, even if the overall concept remains less a movie and more of an exercise routine.

In some respects, ‘Tomb Raider’ has come a long way. Lara Croft, 2018-style, is now less of a geek’s voluptuous fantasy; as portrayed by Alicia Vikander (‘The Danish Girl’), she’s sinewy and serious. Moreover, Lara’s not such an anomaly these days, with plenty of female company when it comes to action heroics: Katniss Everdeen rocks a bow and arrow, Imperator Furiosa flings herself into battle and Wonder Woman suddenly has a bright future.

Then again, we’re still talking about the same limited formula: take a recent Oscar-winner (once Angelina Jolie, now Vikander), put her in a tank top and see how fast she can run while furrowing her brow. Living in London, Lara’s barely making the rent on the flat she shares with best friend Sophie by working as a motorcycle courier. Today’s ‘Tomb Raider’ benefits from an occasionally sneaky line reading from its star but inevitably plays like warmed-over ‘Raiders of the Lost Ark’, too trapped inside its digital punishments to feel truly dangerous. There’s no way to hate a movie that has spiked poles, booby-trapped caves and zombies, but you can fault it for not trying as hard as it should.

Effectively starting from zero, these screenwriters do a better job of giving Lara, heiress to the Croft fortune, a believable daddy complex (Dominic West plays her missing adventurer father). She’s also got a deranged competitor for buried junk (Walter Goggins) and a sidekick (Daniel Wu, who you wish rated some romantic sparks). Norwegian director Roar Uthaug – of 2015’s enjoyably dumb ‘The Wave’ – is an old soul who prefers when we can follow the cutting and ooh and aah over the stunt work. His ‘Tomb Raider’ delivers more fun than you’d expect, but one day, someone should finish the original movie it starts off: Lara Croft, daredevil London bike messenger. We’d play that game.