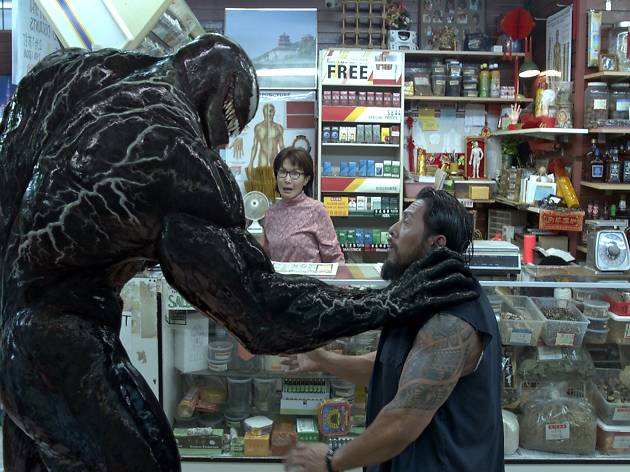 Flinching when it should be in-your-face and entirely surprise-free, ‘Venom’ won‘t satisfy either uber-fans or the unconverted.

Venom, a slick-skinned alien ‘symbiote’ who first plagued Marvel’s Peter Parker back in a 1986 comic, has a Wikipedia entry roughly 10 metres long. That’s not to say that the villain deserves his own film – even a silly one like ‘Venom’ – or to be played by the jittery but often inspired Tom Hardy of ‘Mad Max: Fury Road’ and ‘The Revenant’. It only suggests that a lot of people take even the marginalia of comics seriously. So seriously that they might not grasp when they’re getting short-changed.

It’s these superfans, not casual moviegoers expecting just another blockbuster smackdown, who are going to feel the most crushed as ‘Venom’ slides off the rails. When exactly does that happen? Is it when you realise that Hardy is going to be using that distracting Noo Yawk accent the whole time as Eddie Brock, a hard-charging investigative journalist based in San Francisco? Or when Eddie’s fiancée, Anne (poor Michelle Williams), supposedly a sharp lawyer, dumps him on the street, ring and all, after she gets fired by her Elon Musk-ish billionaire boss Carlton Drake (Riz Ahmed) after Eddie asks him a few uncomfortable questions about his mysterious labs? ‘Have a nice life,’ we hear twice in a few minutes, a repetition that just feels like lazy screenwriting.

Nope, the moment when it all slides into accidental comedy comes when the booming voice of the alien (Hardy again, aurally masked, as he was with his plummy Bane) pipes up in Eddie’s head, calling him a ‘pussy’ and dragging him like a puppet through awkward, listlessly mounted action scenes tricked up with CGI black goo. As you’re enduring the zillionth Frisco car chase since ‘Bullitt’ and ‘The Rock’, it may dawn on you that Venom is supposed to be a bad guy, an antagonist to Spidey (never mentioned here; legally and in terms of solid craft, this isn’t part of the Marvel Cinematic Universe). Why can’t the movie make him properly dirty? The lack of an ‘18’ rating seriously hurts. Entertainingly, Hardy lets himself get jerked around, ‘Evil Dead’-style, but he’s never enough of a jerk – so much for that journo-snoop backstory – and ‘Venom’ isn’t vicious enough to justify its own existence.