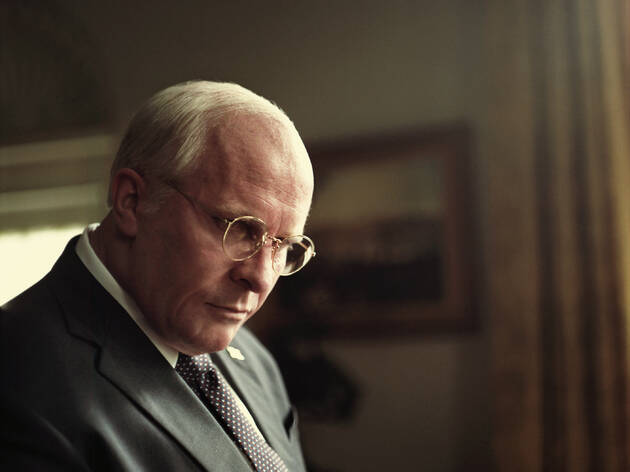 You’re not going to a movie called ‘Vice’ – a chaotic, psychologically dense thicket out of which slinks the Beltway swamp creature Dick Cheney (an astounding Christian Bale, invisible under prosthetics) – expecting a revisionist perspective. That’s never going to happen. Cheney was actually a nice guy? Nope. And even though the frequently meta writer-director Adam McKay (‘The Big Short’) provides us with an onscreen character who blasts the film we’re watching for its liberal bias, that self-own doesn’t get ‘Vice’ off the hook. It’s still a big hunk of red meat, politically speaking.

The happy surprise, however, is that McKay has seasoned the meat in satisfying ways, salting it with wince-sharp performances and an almost experimental style of editing that creates an apocalyptic whirlwind. For those reasons alone, ‘Vice’ feels particularly timely. Bale not only masters Cheney’s smirk and Halloween-mask hollowness (the performance harkens back to his iconic turn in ‘American Psycho’), he supplies the role with a blooming sense of viciousness, transitioning from a Ford-era bumpkin content to sit in his drab fluorescent-lit office to a savvy operator who thrives on vagueness. ‘What do we believe?’ he earnestly asks his boss, a young Donald Rumsfeld (Steve Carell, dialed up to full chatterbox), getting only a guffaw in response. At home, it’s no easier: Dick has a hard-charging Wyoming wife, Lynne (Amy Adams), who cows him into submission. He has to get tough – and that’s exactly what he does.

The ensemble is magnificently rude and amoral, but even better is ‘Vice’s thrusting spirit of montage – daredevil editing that hasn’t been attempted since the high-flying heyday of Oliver Stone (the work is by Hank Corwin, a veteran of ‘JFK’, ‘Natural Born Killers’ and ‘Nixon’). Wild animals roar out of flash frames, blood pounds through veins and the overall tone drifts into crazy. McKay makes an aural feast out of Cheney’s hobby of fly-fishing, the gently bubbling brook sneaking into the sound mix during scenes where the Republican star is baiting his next meal ticket, a rehabilitated George W. Bush (Sam Rockwell, perfect again). The audiovisual irreverence is radical, way more interesting than the dialogue itself. Elsewhere, snippets of the Budweiser ‘Whassup?’ commercial and Survivor (‘The tribe has spoken’) reveal a pop-cultural intimacy that a more sombre film might have glossed over, to its detriment.

Not all of it works: McKay leans on one metaphor too many (a teetering stack of teacups?), and his screenplay’s bookends, starring a miscast Jesse Plemons, strain for depth but ultimately play like a sick joke. Whenever ‘Vice’ tries to be about something, like Cheney’s constant usurpation of power or his heart attacks, it stumbles slightly, but the momentum kicks in when it gets back to the jazzy flow (artery-clogged though it is), picking up the small details that tell a larger truth: Rockwell’s restless leg bouncing behind the Oval Office’s desk on 9/11, his nervous question to Bale, ‘We’re going to be alright on this?’ ‘Vice’ reminds us that we’ve seen worse: an administration of self-interested shits who could actually get things done. It’s a meagre comfort.