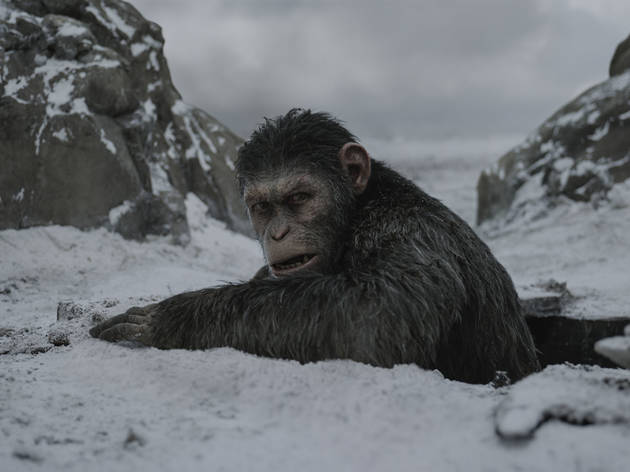 The monkey business is somber, brutal and utterly persuasive in this dazzling third entry of a sci-fi series that's only getting better

An evolution of the tech-heavy Hollywood blockbuster, the ‘Planet of the Apes’ franchise is a Darwinian dream come true. These movies have captured a soulfulness that’s different from anything else out there.

‘Apes’ wrangler, director and co-writer Matt Reeves (‘Cloverfield’) has steered the concept into ethically complex territory, beginning with 2014’s second chapter, ‘Dawn of the Planet of the Apes’. He now surpasses himself with a broodingly downbeat epic set 15 years after the outbreak of the civilisation-killing simian flu. As you’ll have guessed from the title, it’s a war film, but not just any war. From the scrawled markings on the human soldiers’ helmets – ‘Monkey Killer’ – to the bald, bellicose colonel straight out of ‘Apocalypse Now’ (Woody Harrelson, doing his best bug-eyed Brando), this film rewages the war of Vietnam, complete with its tangle of self-negating righteousness and mission drift.

Once again our hero is Caesar (Andy Serkis in a motion-captured triumph that eclipses even his beloved Gollum – the effects here are close to magical), sensitive leader of the apes who suffers a calamitous blow to his family after a sneak attack. His peaceful nature rocked by a desire for vengeance, Caesar departs with a small detachment of shaggy aides-de-camp to intercept the humans while his tribe heads for shelter.

Apart from pulling off the unique trick of having us root for human extinction, ‘War for the Planet of the Apes’ foregrounds a beautiful tension between the savage instinct for retribution and civilised restraint – ironically fought within the heart of an animal. The film is graced with a spooky grandeur: snowy vistas, long-empty buildings and a starkly forlorn, percussion-heavy orchestral score by Michael Giacchino.

After all that forward momentum, it gets slightly bogged down in the machinations of a last-act prison break, and a final hat-tip to Mother Nature’s violence feels beside the point. While we’re immersed in the battle, though, the stakes feel higher than ever. Take note, rebooters. This is how you do it.