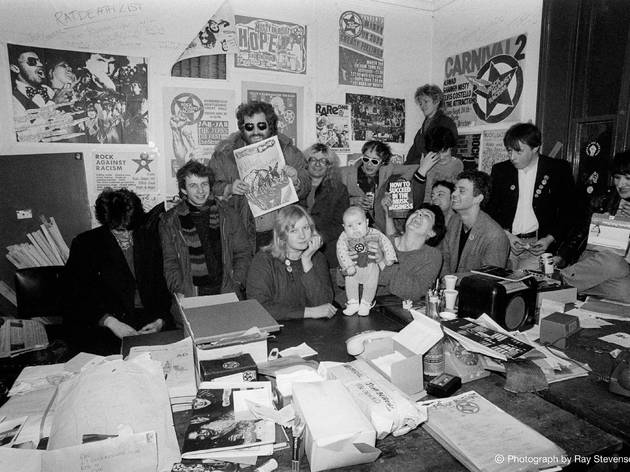 There’s a great bit in this doc about the emergence in the mid-’70s of activist group Rock Against Racism where one of the founders, Roger Huddle, is talking about Rod Stewart. ‘I really liked [him],’ he says. Then Rod expressed his support for the views on ‘overcrowding’ of right-wing MP Enoch Powell. ‘This is the man who’d just moved to LA,’ fumes Huddle. ‘I mean, the man’s full of shit. And I got rid of all his albums and I haven’t listened to him since.’

RAR is often seen as part of punk, but its real background is a 1970s Britain where white megastars like Stewart, David Bowie and Eric Clapton could blithely endorse extremist views while the primetime BBC ran blackface variety shows and ‘It Ain’t Half Hot Mum’. As the National Front polled 20 percent of the vote in Hackney and Bethnal Green, and the police had limitless ‘sus’ (on suspicion alone) powers of arrest directed against Black youth, it was clear that something had to be done.

‘White Riot’ is a highly entertaining trip through the resulting grassroots movement. At its centre is the collection of writers, artists and designers who gathered around Red Saunders, a photographer and performance artist, to galvanise UK music and its fans into action. It could have been a self-congratulatory pat on the back for some ageing rockers. Instead, the big names of punk and reggae appear intermittently. The focus is kept on the sheer daily, bloody-minded determination of those involved.

‘White Riot’ uses archive footage and stills brilliantly. It dispenses with expositional voiceover and clocks in at a lean 80 mins. But all of that pales beside its central message. To stop racism – and any form of discrimination – you have to be vigilant, committed, brave and unified, day after day after day. But it can be done. And that’s worth hearing right now.

Director:
Rubika Shah
Screenwriter:
Rubika Shah, Ed Gibbs
You may also like
Popular movies
We know this city. Do you?