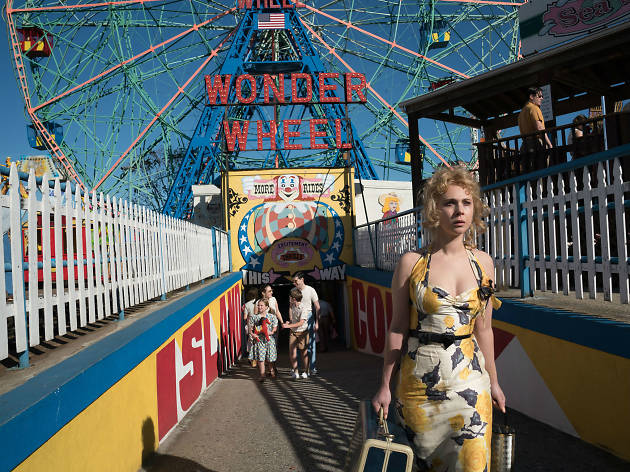 Woody Allen returns to his Coney Island stomping grounds for a half-realised tale of romantic betrayal.

Feel like watching a new Woody Allen film? Nobody does these days. Currently languishing in movie jail, the controversial director soldiers on: Now in his sixth decade of work – and that means a new project every year – Allen has become a toggler between two modes: unchecked nostalgia (‘Midnight in Paris’) and spikier stories about self-delusional pretenders (‘Blue Jasmine’). ‘Wonder Wheel’, the writer-director’s uneven latest, splits the difference. We’re in 1950s Coney Island, a summery pleasure land of amusements. As with Annie Hall, we’re mainly in a house that sits directly under the spinning carousel, casting its neon lights on the domestic action.

But that’s just the surface. Ginny (a fearlessly frazzled Kate Winslet) is a hard-bitten waitress trying to keep her ex-alcoholic second husband, Humpty (Jim Belushi), on the straight and narrow. Their lives are stable enough, if a little constricted: Vittorio Storaro, the legendary Italian cinematographer who filmed 'The Last Emperor', floods their living quarters with a harsh orange hue that suggests low-level panic. Sure enough, tensions explode in the form of Carolina (Juno Temple), Humpty’s curvy grown-up daughter who, after years of estrangement, swirls back into the household with plenty of her own drama. Gangsters want her dead, but in the meantime, she has her eyes on a lifeguard (Justin Timberlake, awkward with the Allen voice) – not so conveniently, the same guy that Ginny is having an affair with.

'Wonder Wheel' plays like lesser Tennessee Williams, brewing its mildly tawdry hothouse atmosphere that, apart from Winslet’s finely etched frustration, never amounts to anything grabby. I’ll leave it to you to wrestle with the fact that this is Allen’s umpteenth movie in which a middle-aged woman is cast aside for a much younger alternative. It’s an undercurrent that, to the director’s credit, churns with guilt and plenty of empathy. But in a crucial way, the film seems half-baked, denying its characters the catharsis we want. Like that giant metaphorical carousel looming over them, it’s a movie that’s spinning its wheels.