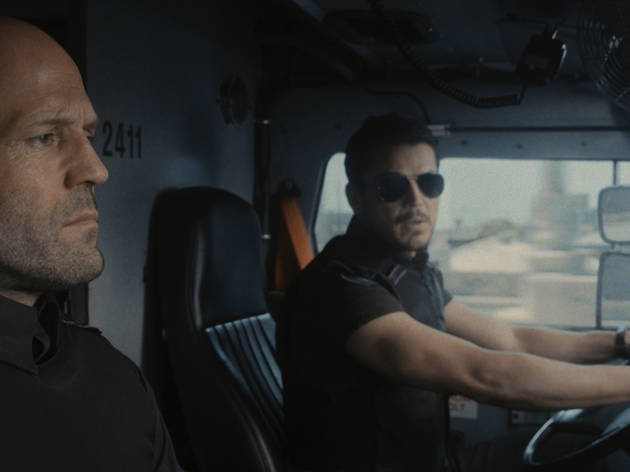 Jason Statham heads up his fourth collaboration with director Guy Ritchie as H, a dead-behind-the-eyes, gruff, mysterious new employee at a Los Angeles security company, Fortico, that specialises in transporting enormous amounts of cash around the city in armoured vans. It’s a loose remake of a barely known French film, 2004’s Cash Truck (Le Convoyeur), although the new title – Wrath of Man – feels more fitting for the heavy, no-nonsense, Old Testament-style revenge vibe which Ritchie brings to the table. You’re never far from a hail of bullets, and the crack of gunfire is basically the soundtrack of this mystery that hangs on the age-old allure of a mystery man on a mission.

Wrath of Man opens on a robbery that goes badly wrong, although exactly how and why it turned deadly we don’t immediately know. It's into the wake of this disaster that H joins Fortico, and Ritchie leads us back and forth in time until we have a clearer sense of exactly who is this taciturn British stranger (who one colleague mocks as ‘Mary Poppins’), and what he’s here to avenge. Needless to say, his motives are as personal as his personality is not warm and cuddly.

You know you’re watching a Guy Ritchie film when most of the criminals look like they’ve stepped out of the pages of GQ. You know you’re listening to one when you’d be hard-pushed to locate at least a couple of accents on a map. Yet, those expected and warmly familiar eyebrow-raisers aside, there are few of the cheeky knockabout larks that mark some of Ritchie’s films, and less of the storytelling muddiness that afflicted others (looking at you, Revolver, the last film on which Ritchie and Statham worked together). This is more of a straight-up, cold-blooded man-on-a-mission action film, and it’s all the better for it. It’s not wildly original, but it’s steely and stylish, and as a story it has a ruthless streak to it that’s weirdly appealing.

In US theaters May 7.