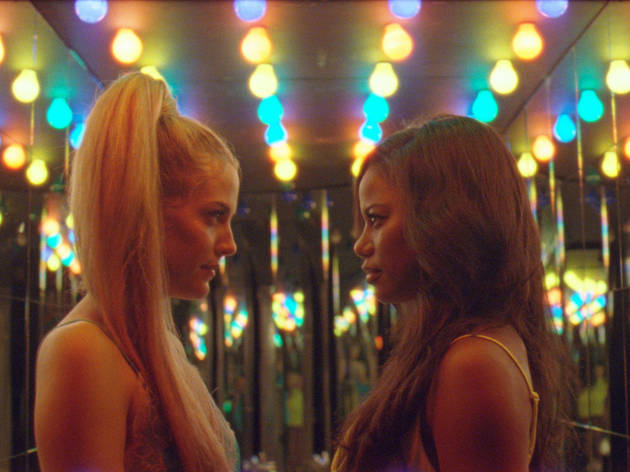 Janicza Bravo turns one of Twitter’s juiciest ever threads into a gripping, funny-awkward road trip

Being addicted to Twitter probably isn’t something I’d recommend to a friend. But in among the oversharing, vicious infighting and cute things someone’s kid definitely didn’t say, there are absolute gems. Back in the distant days of 2015, 19-year-old A’Ziah King took to Twitter to tell a story that went mega, super viral: ‘Y’all wanna hear a story about why me and this bitch here fell out???????? It’s kinda long but it’s full of suspense,’ she said, in what turned out to be a pretty understated trailer for a heart-stopping story of a friendship between two young strippers that goes off the rails in a messy spatter of manipulation, lies and exploitation.

Now, director Janicza Bravo has turned that thread into a sparkling, spike-heeled sprint of a movie, the kind that’s somehow hugely fun to watch even though everyone in it’s trapped in their own internal hell. It’s pretty and massively ugly.

Zola (newcomer Taylour Paige) is beautiful, bored of her diner job and getting her thrills by working as a dancer at a strip club on the side – her boyfriend’s not wild about it but she uses sex to tame him into submission. But it’s meeting Stefani (American Honey’s Riley Keough) that really gets her heart fluttering: they bond over dancing in strip clubs, and the power it gives them. Stefani proposes a trip to Florida, a joy ride that’ll fill their fists with dollars. But things sour fast.

Stefani initially seems sweet, but in Keough’s committed and hugely offensive performance, she quickly turns out to be a cultural appropriation nightmare. She’s like a vampire, bleeding black culture for words and mannerisms and ways to do her hair. But it turns out she wants a lot more from Zola than words – a lot more.

Bravo’s film is brilliantly stylised, setting up its own distinct atmosphere of retro saturated pastels, heightened sexual energy and straight-to-camera monologues that echo the original Twitter thread. Sometimes, the two women’s bodies are reflected in mirrors like we’re seeing them through a diamanté stud, with the bleeps of their smartphones echoed in the crystalline tinkling of piano arpeggios.

Paige’s nuanced, careful performance as Zola is a point of sobering realism in this heightened world. Zola finds herself trapped while Stefani sells sex to a dizzying array of men in a series of swirly-carpeted, stiflingly kitsch hotels. As the screen becomes a nightmarish penis kaleidoscope, Paige’s eyes pull the focus, as she visibly tries to erect a protective wall around herself.

In a Rolling Stone article, King said that she deliberately turned her difficult experience into a tall tale, to raise awareness of sex trafficking. It’s fascinating how often women have to flatten harrowing life experiences into anecdotes to be heard: like when your grandma tells you what all her friends died of with what looks like relish, protecting you and her from the yawning sadness underneath.

Bravo’s movie is so pacy, so compelling that it doesn’t quite have space to land the full horror of Zola and Stefani’s situation. But what it does do is demonstrate that telling your story is a kind of performance, just like stripping is. Zola knows that there’s stuff you show, stuff you hide, real feelings you draw on and emotions you fake. But she quickly learns something more disturbing, too: that although you can switch out your hot pants or your eyelashes, having control over your body in a patriarchal world can be an illusion, one that can vanish as fast as dollars into a pimp's pocket.

Zola is in UK cinemas Aug 6. Available on PVOD in the US now.