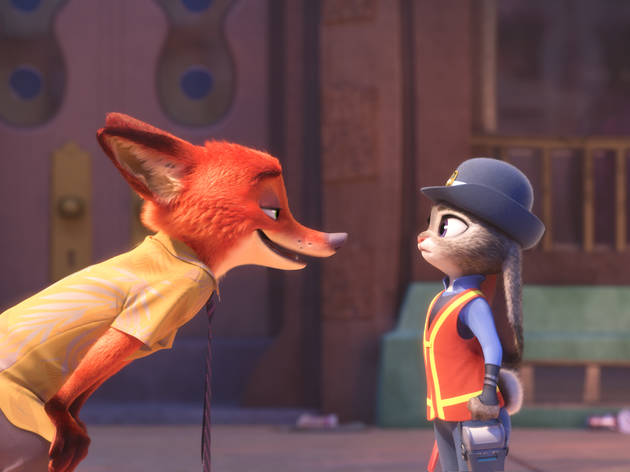 Talking animals in a Disney film? Nothing new there. But this sparky animation takes the idea somewhere fresh and lively by giving us a distinctly human world (well, an American version of it), with cities, streets and ice-cream parlours populated by almost every mammal you can think of – apart from our own two-legged species. So, a moose reads the evening news, a buffalo (voiced by Idris Elba) runs the police force and a lion (J K Simmons) is mayor.

The cheek of it! Still, humans remain in charge. ‘Zootropolis’ is directed by Byron Howard (‘Tangled’) and Rich Moore (‘Wreck-It Ralph’). Their film is zippy and funny but also layered with a let’s-all-get-along message that feels more relevant and engaged than your average kids’ movie (including feminist gags about not calling women animals ‘cute’).

Our main concern is a bunny of the female variety, Judy (Ginnifer Goodwin), who hails from simple rural rabbit stock but dreams of being a small cop in the big smoke – to her parents’ horror. After Judy graduates from police school, she’s lumbered with parking-meter duty. Luckily, her chance to shine comes when she hooks up with a crafty fox (Jason Bateman) and together they pick up the whiff of a corruption trail, taking the film into noirish ‘Chinatown’-lite territory.

The world that ‘Zootropolis’ creates is intelligent and fascinatingly detailed – it feels more like a movie by Disney-owned Pixar than a straight Disney film. Its manic energy and never-ending supply of characterful animals will appeal to young viewers. But there are also some fantastic set-pieces for older audiences, including a brilliant scene with a very s-l-o-w bureaucratic sloth and a charming knock-off of the ‘What have I ever done to make you treat me so disrespectfully’ wedding scene from ‘The Godfather’. Who needs humans?

Director:
Byron Howard, Rich Moore
Screenwriter:
Jared Bush, Phil Johnston
You may also like
Popular movies
We know this city. Do you?