Jane Lynch has become a fixture on the small and big screens, working her way up from scrappy stage productions in Chicago to roles in Judd Apatow and Adam McKay movies and, most notably, on Glee, where her performance as the insult-slinging, tracksuit-wearing Sue Sylvester won her an Emmy and a Golden Globe.

Now, after making her Broadway debut as Miss Hannigan in Annie two years ago, the 55-year-old is prepping for a live show at Joe’s Pub at the Public Theater. See Jane Sing! was born after 54 Below invited her to perform a cabaret set last spring, and the goofy, loosely plotted, upbeat show features Lynch and a few pals (fellow Glee-ster Tim Davis and The Office’s Kate Flannery) tackling everything from Broadway classics to hip-hop cuts.

You’ve named your dog and cat after Olivia Newton-John and Greta Garbo. I assume you’re a fan?
Oh, yes. I wanted to be John Travolta. As a kid, I saw that he and Olivia Newton-John were in the same movie together, and I almost imploded.

Was Grease the first musical that caught your attention?
No, it was The Sound of Music, in ’64 or ’65.

What grabbed you in The Sound of Music?
Of course, I had a crush on Julie Andrews. But it wasn’t like a sexual crush—kind of like you wanted this cool nun to be your mom. She sings, the kids sing, and they wear drapes for play clothes. I wished I could have been one of the Von Trapp children.

When did you start singing?
I’ve always sung. My dad had a song in his heart and on his lips 24/7. A lot of the time, it was the same song and the same phrase over and over again. My dad used to go, [Singing] “Liver, bacon, onions!…” That was something he made up, which made some people crazy, like my mother, but not me. And now I have some friends who will say, “Jane, Jane, Jane, if you’re going to sing, sing something else.” I didn’t realize I was singing, much less the same phrase over and over. But my parents loved to harmonize. A lot of the songs in See Jane Sing! are pulled straight from the kitchen table and my parents harmonizing together.

How did you pick the songs for See Jane Sing!?
Usually, I have a memory associated with it. It’ll come to me. A couple of months ago, I was thinking of that song—it used to make me cry as a kid—“Smile a Little Smile for Me.” And I was thinking about that [Flying Machine] song and thought, Why can’t I do that in my show?

So the songs don’t have a particular theme?
Not except for the fact that I like ’em. In it, Kate Flannery, who was Meredith on The Office, plays this overzealous, very-sure-of-herself character who then embarrasses herself. And I’m there to pick up the pieces. She’s like my sidekick, but she ends up stealing focus away. And Tim Davis, the vocal arranger on Glee, plays the straight guy who joins us to do some three-part harmonies.

Did Glee influence this show?
Just a bit. I did a rendition of Irving Berlin’s “Mr. Monotony” in the show, and it was cut, but I loved it, so it’s my second number. Also, we do “Anaconda.” After [performing] “Super Bass” on Glee, I knew I wanted a little more Minaj. I think she’s a damn genius.

Why did you choose Joe’s Pub?
I love the space; it’s a tiny, great space. I saw Bridget Everett there. She’s amazing.

It’s good to get acquainted with Joe’s Pub by having Bridget’s boobs in your face.
And her crotch! She stood on the arms of people’s chairs and put her crotch into people’s faces! Thank God I’m not going to be doing that.

What attracts you to live performance?
There’s just a particular energy, a give and a take experience that takes place onstage that’s so uplifting. And when the person on the stage is feeling it, the audience feels it. And it has to be the two of you kind of creating this thing, this alchemy.

How do you think coming up in Chicago, rather than New York or L.A., informed your understanding of show business?
In Chicago, actors start up companies and get together and produce things, and there’s a really rich, vibrant non-Equity theater scene out there. One of the things our wardrobe person on Glee told us: “I always know you Chicago actors because you always hang up your clothes.” You mean, actors don’t hang up their clothes? We feel responsible, we’ll have to wear them the next night. We had to wash and iron our own things. And we roll with stuff.

Who from your films was able to just roll with it?
Will Ferrell in Talladega Nights. He’s a very generous performer. He’s kind of just one of the guys, but his name happens to be above the title.

While you’re working with Christopher Guest on movies like A Mighty Wind or Best in Show, how much freedom do you have?
Well, the script looks like a script, but there’s no dialogue. We know what information has to get out—there’s a story and there’s a flow, but there’s no dialogue. So when we shoot this scene, we know this thing needs to happen between us, and other than that, it’s a free-for-all. That’s why his takes go long, long, long. I don’t know how he takes hours and hours of footage and picks out the moments to tell a story, but he is brilliant at it.

What appeals to you about the antagonistic characters you seem to play a lot?
I’m fascinated by people who are entitled, who really think people care about their fucking opinion—when a person walks into the room and says, “Okay, this is how it works.” Hollywood is rife with it, especially people who have a little more power than they have talent.

See our photos of Jane Lynch 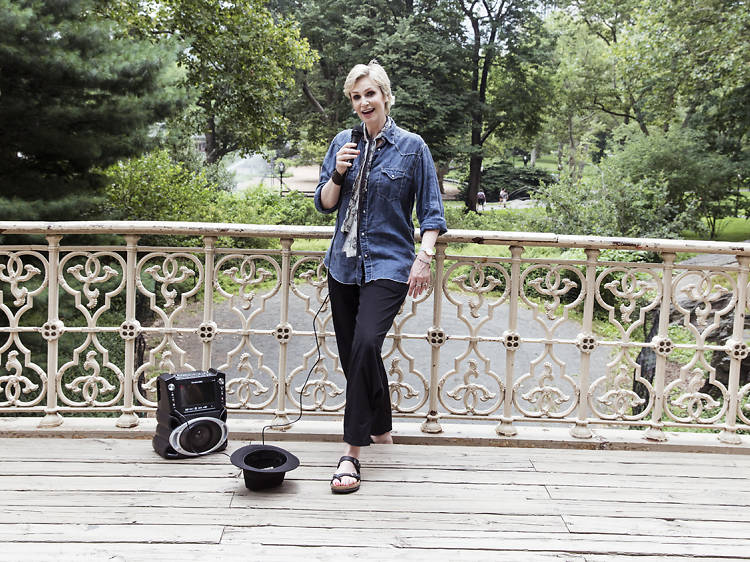 Check out our photos of Jane Lynch busking in Central Park

What happens when Glee star Jane Lynch goes to the park to sing (and play!) her heart out?