Loyle Carner: 'It's so positive that young men are able to open up’

He’s the thoughtful Croydon rapper who is cooking up a storm with his debut album. We spend some time with a rising star

Is Loyle Carner the most charming man in UK music? Possibly. Has he released one of the most poetic hip hop albums this year? Definitely. While the second wave of grime risks becoming stale, 22-year-old Loyle (a play on his real name Ben Coyle Larner) is a proper breath of fresh air. His laidback storytelling tips a hat to old-school hip hop, with searing honesty at its core. I mean, how many rappers have their mum reading a poem on their debut album?

We meet in a Dalston kitchen. Loyle’s cooking for 30 fans, who in two hours’ time will tuck into the elaborate meal he is preparing. They are a lucky few who pre-ordered his debut album ‘Yesterday’s Gone’ and won the chance to be wined and dined at an exclusive playback event. 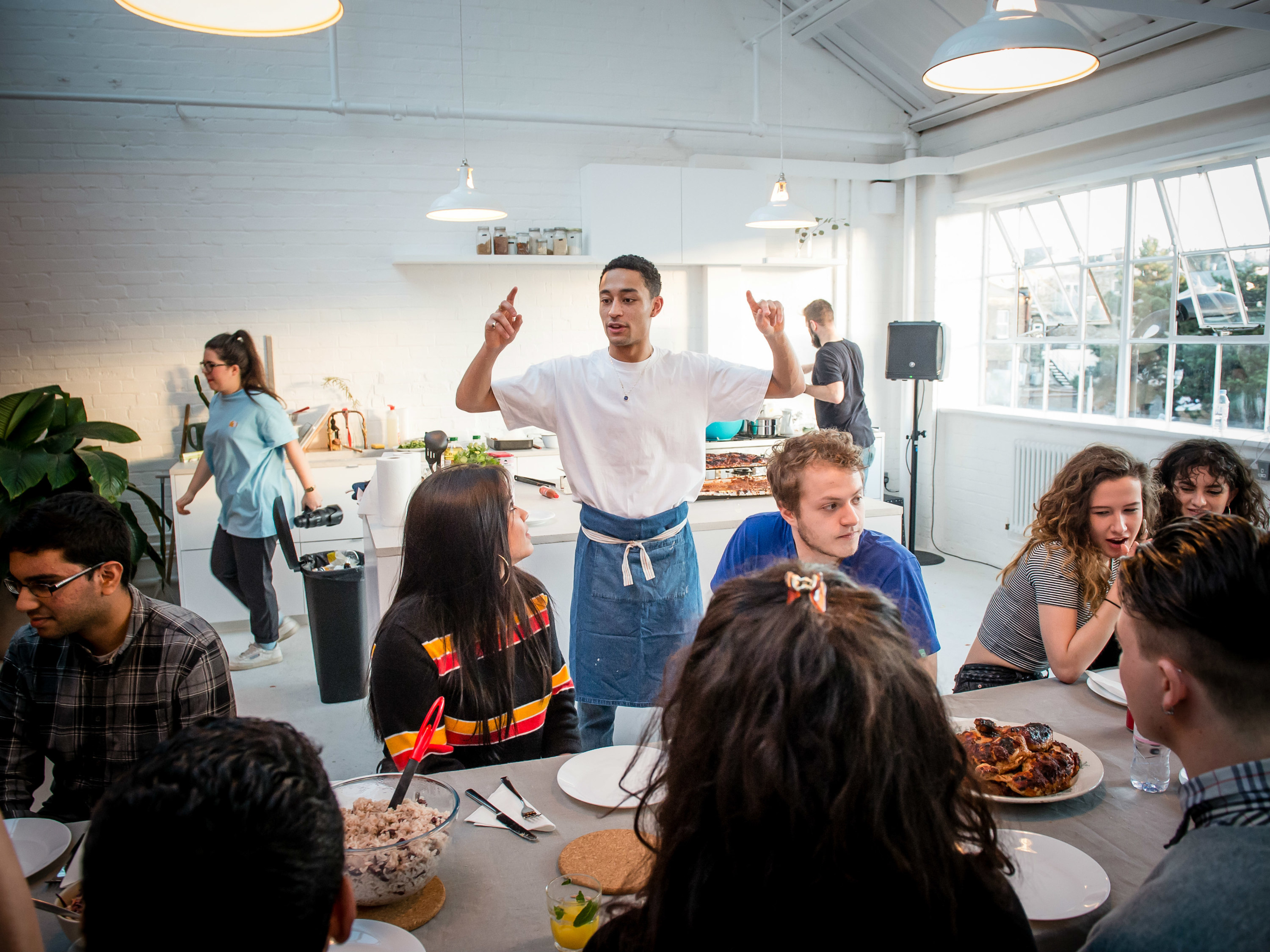 On the menu is jerk chicken, sweet potato curry and saltfish fritters. The smell is unbelievable. In person, he manages the impossible: talking and moving constantly while listening intently. His ADHD is no secret; neither is his love of cooking. Last year the 22-year-old set up Chilli Con Carner – a series of cookery workshops for young people with ADHD.

Once his guests are seated and the plates are heaped with food, Loyle presses play on the album, then ducks down behind a kitchen unit. And there he sits, spatula in hand, mouthing along to his own words, looking nervous. He needn’t worry. ‘Yesterday’s Gone’ – a nod to the Fleetwood Mac classic, a favourite of his mum and late stepdad – is complex and homegrown, with no hint of braggadocious posturing or falseness. Each track is an open invitation to sit in his kitchen with younger brother Ryan, to obsess over vinyl with mates, sharing jokes about girl troubles, being skint and regrettable drunk texts. World, get ready to crush hard… 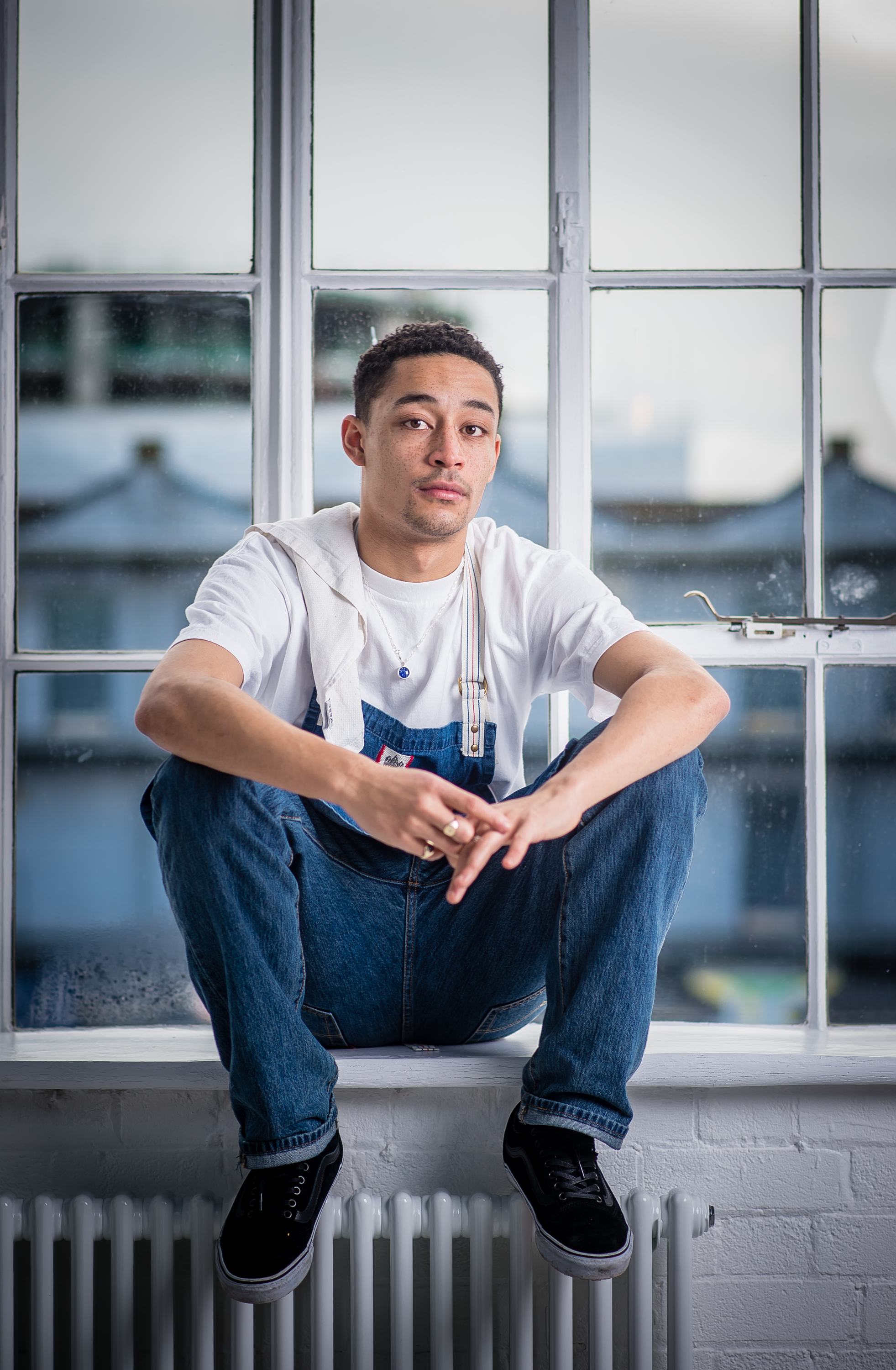 So you’re plying your fans with tasty food before playing them your new album – smart move!
‘Exactly! That is the way to the heart. My grandma used to say that’s why I cook so much. I’m quite excited to chat to them, I know they will be honest and say if they think I’m on the right track with my music.’

In the video for ‘Florence’, you make pancakes for an imaginary younger sister. Are you asked to make pancakes a lot now?
‘All the time! I got really good for a bit, but then I started forgetting the secret part of my nan’s recipe and they wouldn’t work. So people were like, “This is your nan’s secret recipe?” ’

It’s amazing to hear a rapper rapping about wanting a younger sister. Does being open in your songs mean people are open with you?
‘Yeah, plenty of people give me hugs and there’s a lot of tears on the road. I think people feel a strange closeness when they listen to my music.’

How do you know?
‘Because I always talk to people after shows. That’s what it’s all about for me. I can’t start a conversation on stage, feel all these things and then go away leaving people wanting to ask questions. It’s actually the most important part – the conversation after the show.’

How did that song come about?
‘Kwes [guest vocalist on the song] was feeling really broody and I was really upset about my pops (Loyle’s stepdad died in 2014). He asked what would cheer me up and I said "The idea of having a little sister." It was done in like an hour.’ 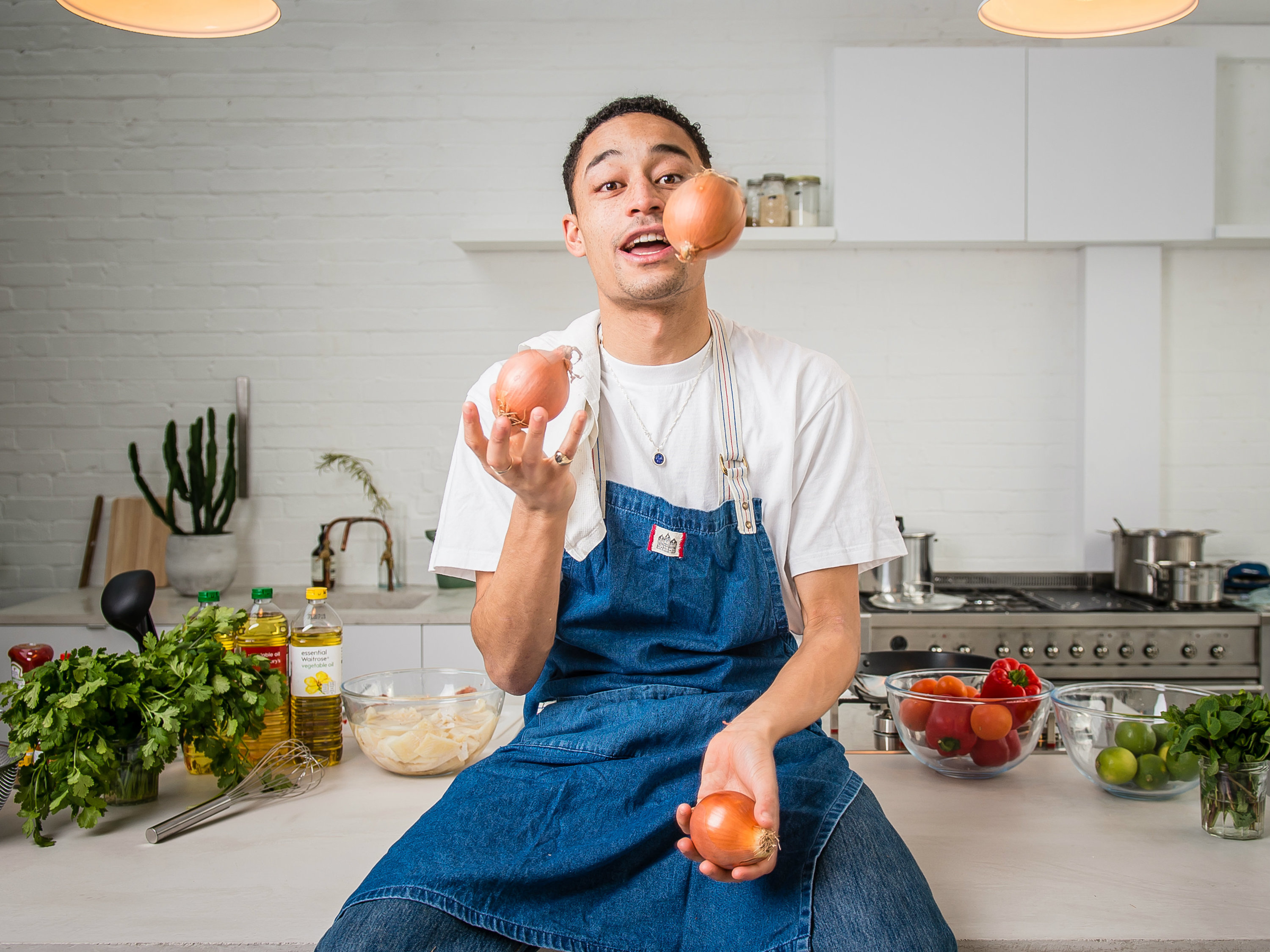 You literally carried your brother Ryan on your shoulders in the video for ‘BFG’, did you have to twist his arm?
'Nah, he’s a very cool teenager. Also we didn’t think anyone was going to watch the video, innit? I properly dislocated my shoulder though and for the whole video I was juggling and my arm was moving just a little bit further down. I still don’t think it’s back in place. I did promise him a Five Guys. And he got one!

People have struggled to position your music in a genre. How would you define your sound?
‘I’m just a rapper. People are really quick to say I’m a spoken-word artist or an indie rapper or all these bullshit things. I’m just a rapper and I make rap music.’

You’ve spoken about your love of first wave grime. But do you have a connection with the grime scene?
‘It’s arguably the biggest thing in youth culture right now, but it’s a lot more cliquey. Back in the day, you could watch a station like Channel U and go from Skinnyman to Kano then to Skepta. It shaped me because they were all English people rapping. But now it’s all “English people have to sound like this and come from this place and use this speed”, and that’s where I have a disconnect from it.’

Would you ever make a grime track?
‘I used to make loads of grime music for jokes. I do have lots of recordings and actually there’s one out there…but wait, nah, you’ll just find it! I can’t say anything else.’

Your recent single ‘Isle of Arran’ has been compared to early Kanye. How do you deal with accolades like that?
‘I can’t quite handle it. Kanye formed me, he was one of the first people to speak up in rap against homophobia because his brother is gay. It’s those kind of things that resonate. As a straight man from London, I stand behind every gay man in London because we’re all men from London. He was positively changing perceptions, especially in male culture, where everything is supposed to be kept under the hood. Basically, Kanye is up here [gestures] and my album is very humbly down here [gestures] and I’m cool with that’.

What it is like to be a young man in 2017?
‘It’s so positive that a new generation of young men are able to shed the stereotypes of not being able to open up. It was never my intention for that to happen with my tunes. Opening up for me just happened. I grew up with my mum, my grandma and my auntie so there was no bravado. I open up to my little brother so that he knows it’s okay: it’s cool to cry.’ 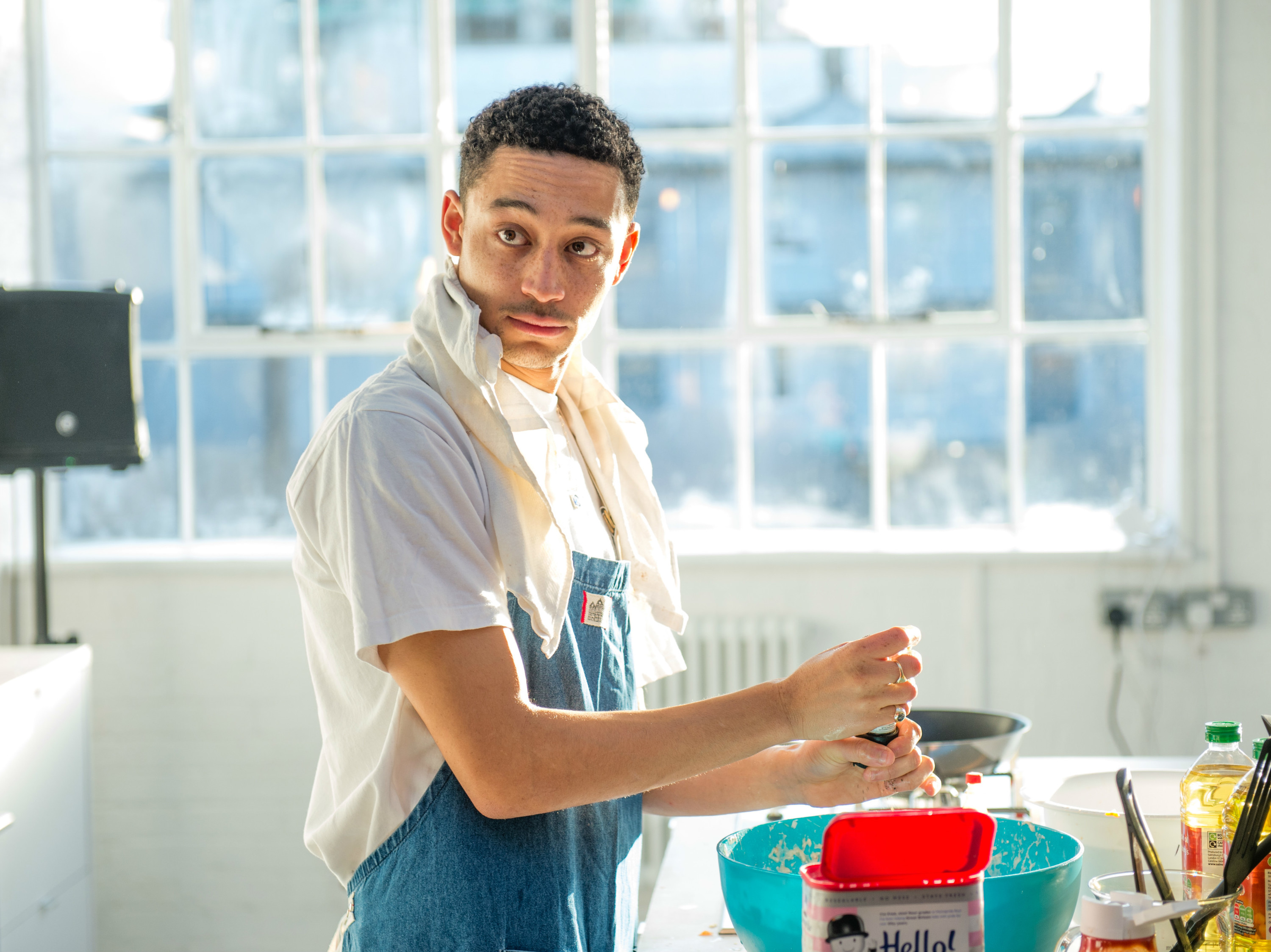 What influence has your ADHD had on your ability to write and rhyme?
‘When I talk face-to-face I always say the wrong thing. But with music, I get to write it down and say something considered. I get to present myself how I would be at all times, if I could.’

Are you constantly writing in a notepad or recording on your phone?
My mum always said never look at a blank page because it has nothing to offer you. So I try to get up off my feet. I go out and walk my dog, write in my head. I tried to write on my phone but I kept fucking breaking my phones! I’ve lost more than I’ve recorded on my phone. It’s gutting so I had to stop it. I now write in books…but I keep losing them too.’

Was it a conscious decision to talk about your ADHD?
‘I was never trying to be an ADHD ambassador. But when people asked me “Yo, you’re quite hyper, you got ADHD?” I said yeah. A lot of guys get in touch to say thanks. It’s the best thing.’

You recently ran cookery workshops for children with ADHD. Are there plans for more Chilli Con Carner (amazing pun btw)?
‘Thanks! Once the album is out and the tour is done I’m gonna go to a culinary school for like six months. And then I want to get the school to the point where it’s self-sufficient. We’re gonna do more courses this year and then by next year the school will hopefully get a permanent spot.’ 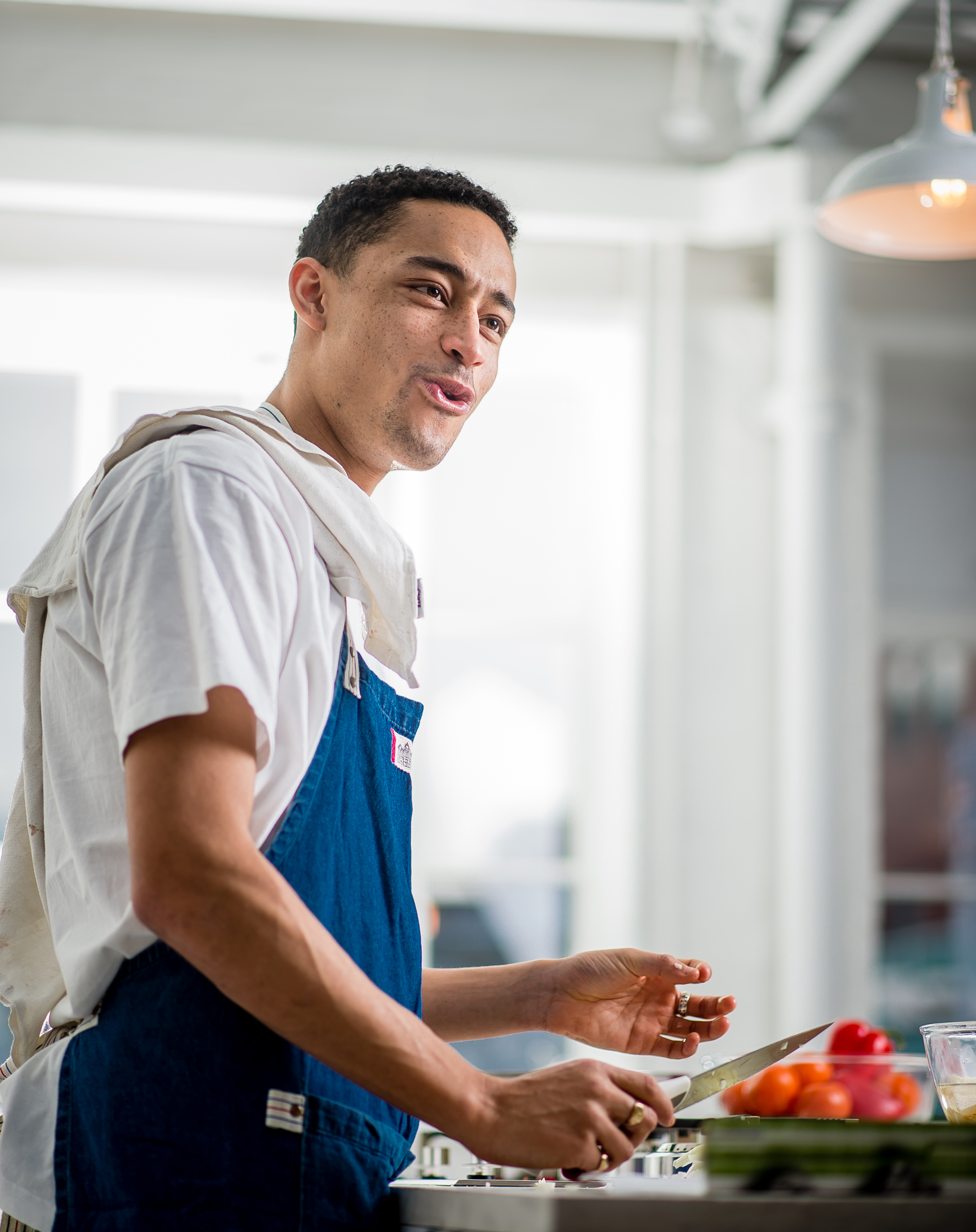 You’ve been hyped for the last two years. Did you feel pressure to make this album?
‘I was kind of stressing because everyone was like “Where’s the album?” but at the start of 2016 I only had three songs and I was really struggling to write. I was seeing this girl who was just a bit mean and I wasn’t inspired. It kind of ended on January 10 and suddenly I was ready to start experiencing stuff again. Then I was able to write about everything. I was flying!’

I bet you get sent a load of samples from excited producers.
'Actually, I was quite drunk one night and I got a message online from this guy Saul XL saying "I’ve got a beat". I don’t usually reply but I was quite drunk so he sent it over and I started recording. Completely forgot about it then found a voicemail on my phone a couple of days later and it was this finished song. It's called 'The Seamstress' and is on the album.

Are you still showing your mum what you write?
'Yeah, I've got this freestyle on a radio show coming up and I showed my mum. My main question is "does it still sound like me?"'

Waaaait. You wrote your freestyle beforehand?
'Nah, that’s blasphemous. Freestyle has become this thing where people are allowed to read from their phones like a ‘Fire in the Booth’ freestyle, but an actual ‘freestyle freestyle’ is like Sway’s 'Five Fingers of Death' where he plays five different beats and tries to catch you out. Now that is a freestyle because you can’t prepare for it. I would love to do that show. I've studied and watched them all, can’t get enough. Can Time Out make that happen for me?' 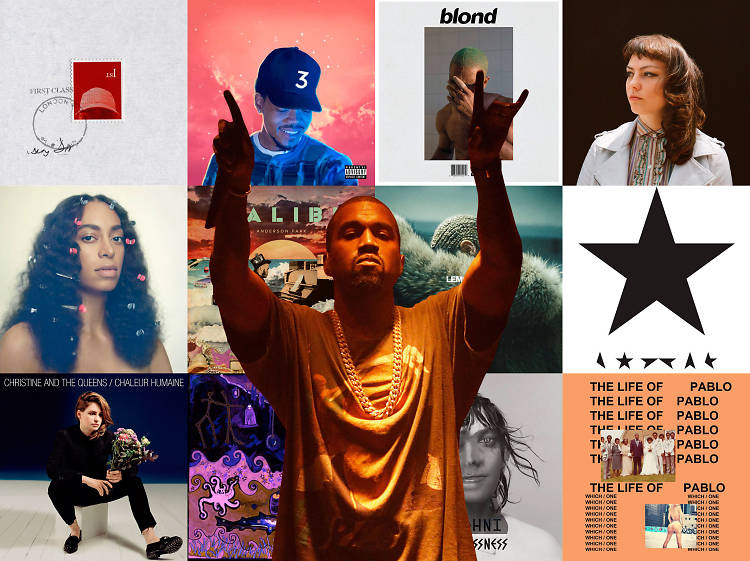 Look back at the best albums of 2016: from world dominators like Kanye and Beyoncé and homegrown grime stars like Skepta and Kano, right through to the wondrously weird debut from two Norfolk teenagers and David Bowie’s swansong.