Riz Ahmed just won an Oscar for ‘Long Goodbye’: here’s everything you need to know about it

The Long Goodbye, a short film produced and co-written by British superstar Riz Ahmed, just won the Best Live Action Short Film Oscar. You may have missed the win on the news, not just because of ‘the slap’ but because it was one of the awards controversially handed out in the pre-recorded section of the American Academy Awards.

When Ahmed picked up the Oscar, the 39-year-old voiced the importance of togetherness in divided times. ‘We believe that the role of the story is to remind us there is no us and them,’ he said. ‘There’s just us.’

Behind Ahmed on stage was co-writer and director Aneil Karia, best known for directing Surge. Karim’s debut film saw Ben Whishaw put in a Sundance award-winning performance as an airport security guard who has a mental breakdown. Here’s everything you need to know about the pair’s award-winning collaboration.

What is The Long Goodbye about?

Twelve minutes long, The Long Goodbye is divided into three acts. The first part sees an Asian family at home, in a house not unlike the one Ahmed grew up in Wembley, London.

Ahmed’s character is at the heart of a busy household. We meet him having a dance-off with a younger brother, criticising another sibling for not doing the washing up, and arguing with his dad over whether it’s worth watching the news. Upstairs, a gaggle of girls are preparing for a wedding, with the bride admitting she fancies a work colleague.

The middle section switched focus to show why you ignore the 24-hour news cycle at your peril – especially as an immigrant family in modern-day Britain. The rioters glimpsed on-screen arrive at the family’s doorstep. White nationalists enter their home, terrorising the family, before dragging them onto the streets and attacking them.

On the soundtrack is a track from Ahmed's 2020 concept album, ‘The Long Goodbye’, which looks at Britain’s post-Brexit relationship with South Asians and British Asians using the metaphor of an abusive relationship. The album inspired the short film.

Where can you watch The Long Goodbye? 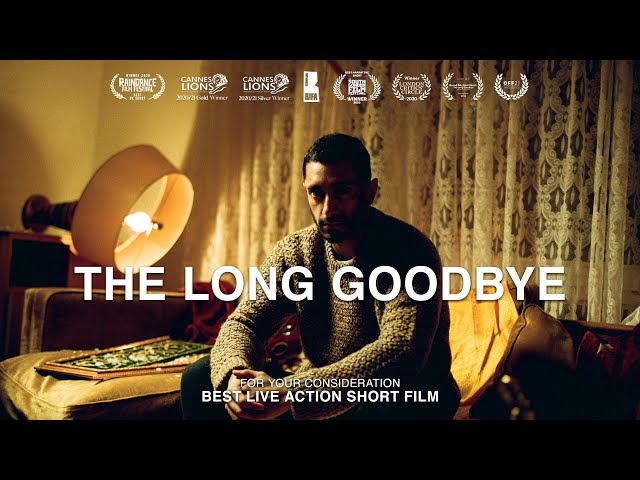 How did The Long Goodbye come about?

Ahmed was put in touch with director Karim through a mutual friend in 2019. He had just finished the album and while there was no project in place, the pair bonded over their shared experiences of growing up in Britain and wanted to work together. After a series of increasingly out-there conversations, Karim presented Ahmed with a two-page outline of the proposed short film.

The album, their shared experiences and the surrealness of those chats converge in the final act of the short film. In what may be the afterlife, Ahmed’s character starts singing ‘Where you From?’, a track with pointed lyrics which include: ‘Now everybody everywhere wants their country back/ If you want me back to where I’m from then, bruv, I need a map.’ And: ‘Kidnapped by empire and diaspora fostered us.’

The eagle-eared might recognise the song and the lyrics come from the opening of Mogul Mowgli, Bassam Tariq’s magical realist tale in which Ahmed plays a singer struck down by an autoimmune disease.

The Long Goodbye is another cog in multi-hyphenate Ahmed’s exploration of identity and place. They’ve been a focus of his work as he comes to terms with what it means to be the son of an immigrant growing up in modern Britain.

How does The Long Goodbye tackle Brexit?

Also on his agenda is an exploration of intergenerational trauma – the idea that trauma can be inherited due to genetic changes in a person’s DNA caused by traumatic experiences. And it's easy to see why Brexit would be so traumatic and provocative for someone whose heritage is South Asian and whose ancestors lived through the bloodbath of Partition caused by the British Empire.

With its ideas of ‘us’ and ‘them’, separation and the reinforcement of borders and demarcation lines, Brexit was a particularly triggering experience for this diaspora. This aspect is implied in the film through the songs chosen for the soundtrack.

But right now, the more visceral and immediate component of The Long Goodbye – that your whole world can suddenly be turned upside down by an unexpected and superior outside force – applies almost equally to Ukraine.

The Oscar win for this short film feels almost like it was in the stars. It’s a concern for all of us that the safety and the world we once thought was stable may not be the castle it once seemed.

Oscars 2022: Five things that made this year an Academy Awards horror show.

All the winners at this year’s Academy Awards.