Josh Tillman’s transformation is a story of two parts. His first epiphany came when the songwriter headed down the California coast with a bag of mushrooms and the ambition to write a novel. What emerged was a new alter ego—puckish indie-rock prankster Father John Misty—and an album, 2012’s Fear Fun, an arch journey through sex-and-drugs-and-booze–soaked Los Angeles. Onstage, his hammy body language suggested someone acting out a carefully constructed role.

His second epiphany was different: Tillman got married, and on his new record, I Love You, Honeybear, he hurtles headlong into the jealousy, paranoia and self-doubt that accompany love. Embracing lush orchestral pop, the album is dark, funny and brutally honest. On this side of the cathartic journey, he’s emerged more confident—the Father John Misty who’ll arrive at Central Park on August 5 has mastered the mic twirl and the pelvic thrust. He’s still smirking, but now he looks audience members in the face, like he’s searching the crowd for a long-lost sibling. It promises to be one of the best summer concerts in NYC. Talking to us from his home in New Orleans, Tillman comes across self-deprecating, analytical and cripplingly self-aware. Yet somewhere in there, he’s enjoying the wild ride.

How are you?
It’s going to take me a minute to warm up. I’ve been on tour for three months. Got home yesterday, and I was up really late last night.…

What were you doing?
Writing. Finally getting a moment to sit down and get stuff that’s been percolating for months down on paper. Or an iPhone. An iPhone Notes screen, to be more specific.

So you’re fleshing out notes you took on the road?
No, just from my brain. I didn’t want to give the misperception that I was writing in a rice-paper journal or anything. This is in my underwear, ankles crossed over the dinner table, hunched over a tiny glowing screen at 3:30 in the morning.

Are you the kind of person who can only write stuff at night when everyone else is asleep?
Sort of. I just haven’t really written my lyrics down at all. But the stuff that I’m writing right now is pretty dense and requires a lot of revisions. A lot of my songs have, like, 20 words in them.

You moved from L.A. to New Orleans in 2013. What was that transition like?
I was under the impression I was going to vampirically move down here and cannibalize the local color for my own cynical songwriting purposes. That did not happen, at all. I spent a good eight months hating myself for not writing any music. But then there was a whole album’s worth of material that was just, you know, sexual misadventure, tales of woe, and it wasn’t very good. It was pretty boring because the life that the songs are predicated on was pretty boring. I wasn’t striving for some next place.

Does New Orleans feel like home to you, or does it still feel like a stopping place?
It very much feels like a stopping place. It was just a very impulsive thing. I will say that I’ll never take a year off again. It’s a horrible idea for me. I need to be in some state of work. I can’t deal with the imperative to be happy. There’s this obscene injunction to enjoy life that I just can’t deal with.

You’re fully engaged in touring after taking all of 2014 off, but does that have its own problems?
It used to. I would get kind of stuck in this Chinese finger-trap of being on tour and being miserable and out of control and just wanting to be back home. And then getting home and just being restless and moody and bored out of my mind. I needed to cultivate some kind of internal balance. I was pretty out of control physically and emotionally. Now I seem to have found a good balance. I think it also helps that, with this material, I’ve been able to reconcile myself with being a performer. [I Love You, Honeybear] is so explicitly kind of vulnerable that it would be rude otherwise.

How do you tap into that when you’re onstage?
At some point, it clicked that eye contact was a really important element of bringing it all home. I’ve always just contemptuously stared into the middle distance while I perform. Singing these songs directly to the audience, specifically the first few rows, seems to give the whole thing vitality. And that’s what I’m interested in, the psychodrama that unfolds over the course of the evening. You kind of single out a few people. I think some people leave these shows feeling like they’ve been riding the bus with a pervert.

How has your life changed since the record came out?
The album is about transformation and intimacy, but a lot of days I don’t particularly feel like a transformed person. Or I don’t even feel like I resolved the issues. A lot of it was forged in fits of insane, irrational jealousy that I had never really experienced prior to this relationship. And thankfully that has been resolved. It’s had this really unexpected side effect of giving me a more intense clarity on the world than I expected. I assumed that it’d all continue and I’d just go deeper and deeper into my own emotional ecosystem, but I actually don’t want to do that. This album felt like a major shark-jump before it came out. Nobody wants to hear me talk about my life and my psyche and neurosis in vivid detail. Seeing it resonate just gives me more cues for next time when things feel like a question mark.

You’re playing Central Park and once performed at Prospect Park, for 2013’s Great GoogaMooga…
The food festival? I enjoy festivals when someone can just be walking by and then be like, Who is this psychotic Barry Manilow motherfucker? That’s gratifying. But I’m still getting used to the enterprise of bigger shows in general; that’s kind of the next frontier for me—how do I do this thing without resorting to clichés? Because when you talk the way that I do, there’s so many false starts and mumbles and self-loathing. That doesn’t particularly translate well to a giant stage in front of thousands of people.

When you play live, you come off to me as very direct.
I feel like I may have some kind of dimorphic perspective on how it’s going. Central Park will definitely be far and away the biggest show I’ve ever done. When I go out onstage and I’m like, “How’s everybody doing tonight?” I just want to die. In a lot of ways, what I’m really interested in is: How do you put on a great rock concert and make it familiar but new? It’s a good thing the show is almost sold out, because I’m doing a pretty miserable job of promoting it; I have no idea what the fuck I’m doing up there.

Luckily this isn’t a morning-TV interview where you need to explain it in a sound bite. Have you done any of those?
I have done stuff that’s been videotaped and I go into full demonic-clown mode. Over the phone, I feel a lot more humane, but if there’s a performance aspect to an interview, I tend to run wild a little bit.

Do you find people are coming up to you wanting to talk about love?
I’m just starting to see that, which is ironic, because I feel like if [I Love You, Honeybear] is a portrayal of what love is like, most sane people would run for the hills. Two young couples were like, “We got married because of your album,” and it’s kind of been giving me nightmares. I do not want to set a precedent for that, that is for damn sure.

Is love something that you get better at over time?
Yeah, look at those [Dr. Love] questions you asked me. It’s not that much of a stretch that those summarize most people’s perspective on what love is. First dates, compatibility, etiquette—a lot of the reason people are so disenchanted with love is because the conversation around it is so vulgar, farcical, obscene and banal. It’s just fucking stupid. Why would anyone want to sign up for that, the way our culture portrays it over and over? It doesn’t get the respect for creativity that it deserves.

Do you have any new insights now that you’re married? Sometimes marriage itself seems kind of like an end point.
Yeah…that sounds horrible. I think that for a lot of people it is. I was having this conversation with a friend the other day about whether he should get married. Unless you make a reason for yourself, there’s no good reason. For me, it’s all about Emma. It just doesn’t exist as a thing outside of her. I don’t understand people who walk around saying, “Oh, I just want to be married.” There’s nothing fucking magical about marriage. I’ll say that there was an incredible moment [at the wedding] when she turned the corner and I saw her there in her dress and it was like I was seeing her for the first time. It was a more potent psychedelic experience than anything I’ve ever had, and I wouldn’t trade that in for anything.

So you’re saying that love is the ultimate trip.
If you’re interested in excavating your subconscious and building consciousness and self-awareness, intimacy is far more radical than anything else that I’ve experienced. But I guess I’m really into the business of living and of these fundamental human experiences. If you have some kind of constant nagging suspicion that there is more to be wrought from this weird horror show called human life, then I feel like intimacy, birth, death, love, children—these are languages by which we get to achieve a greater understanding of this fucking mystery.

Do you have any concrete plans for what happens after this tour is over?
No, I don’t want to confuse the issue. Nothing outside of just making another album, doing more interviews, dying someday.

View our portraits of Father John Misty in New Orleans 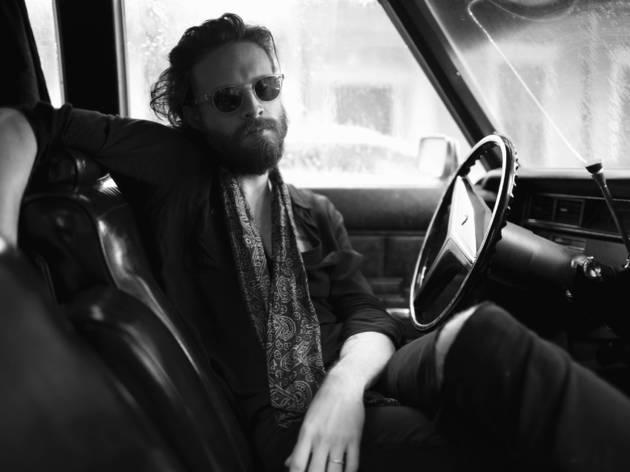