Are the two new Chief Keef mixtapes any good?

Big Gucci Sosa, the anticipated mixtape from two of hip-hop's most notorious and controversial artists, Gucci Mane and Chief Keef, is phenomenal. Gucci Mane and Chief Keef tag team each track with ease, rapping about trapping and other street activities. You know what to expect from these two artists, and this collaborative effort delivers. The two are savage, and they let you know. These are guys who love to count paper, as "Paper" clearly illustrates. Yet Gucci also takes time to reminisce about his school days on "First Day of School." Keef jumps on the track towards the end, admitting that the song "go crazy." Over the 12 songs, Gucci delivers his usual quirky, catchy flow and hooks. Keef stands out here as his lyrical content becomes more wordy than choppy, as he pauses before delivering the next bar. Keef flows through the songs with ease and even displays wordplay in a few cuts on the project. If one loves detailed trap stories about flexing and finessing, the project is a must. Similar in outlook to its counterpart, Chief Keef's Back from the Dead 2 dropped on Halloween as well. Again, BFTD2 showcases an evolved Chief Keef. Out of 20 tracks, he produced 16, with drill pioneer Young Chop relegated to just two songs. His beats are basic, but well put together for someone who decided to start producing all of a sudden. Keef uses enunciations, ad-libs, laughter and an unorthodox way of rhyming to create a different type of sound. That's has always been a part of his allur

T.I. gets back to 'Paperwork' on new album

The introduction of of T.I.'s ninth album asserts that he is once again seated upon the throne with a track titled "King". Clifford Harris, a.k.a. the Trouble Man, a.k.a. Rubber Band Man, has an impressive catalogue leading up to Paperwork. From the album title, it seems T.I. is trying to summon the feeling of Paper Trail. Unfortunately, it does not measure up to that 2008 effort. In the years since Paper Trail, T.I. has twice been incarcerated, but one could hardly tell, as he never missed a beat flawlessly flowing over songs on No Mercy (2010) and Trouble Man (2012). His Atlanta accent is accentuated more this go round, as he returns to his roots and gets a bit personal. In the title track featuring Pharrell, T.I. raps over an ol' school, feel-good cut in which he reminisces about his humble beginnings. In "On Doe, On Phil," T.I. and Grand Hustle label-mate Trae the Truth pay homage to the ones near and dear to him that have passed. Elsewhere, it is hit or miss over the 15 songs, as he gathers R&B heavy-hitters Chris Brown and Usher on "Private Show" and "At Ya Own Risk," and throws in radio singles "About the Money" featuring Young Thug and "No Mediocre" with Iggy Azalea, who has been heavily affiliated with Grand Hustle in her rise.     Still, the album, executive produced by Pharrell, has a good sonic sound. Each song transitions into the other as seamlessly as movie scenes, more successfully than his cinematic last record, making it another must have for T.I. fans.—Jord

Kids in high school and college professors were in attendance at an all-ages Metro show for an energetic performance of the Pro Era hip-hop crew and leader/headliner Joey Badass. The venue was perhaps three-quarters full, but if one judged by the roars from the crowd, it could have been mistaken for a packed house.   The crowd was receptive of the lesser-known opening acts, who had audience members participating in their songs. In between sets, the DJ played old-school jams like Montell Jordan's "This Is How We Do It" and Jay Z's "Jigga." A blue light kept the stage lit in a cool vibe. One of the Pro Era members, Kirk Knight had the room chanting along with the hook to his song "Keep It 100." His last number, "Explosion," was a good word to describe the pandemonium leading to the final act, Badass himself.     Before the 19-year-old came out, the DJ switched to a slew of monumental records—Kanye West's "Good Life" and "Can't Tell Me Nothing," 50 Cent's "Many Men," Dr. Dre's "Xplosive." The house lights flipped from blue to red. Badass emerged and said that Chicago reminded him of home, Bed Stuy, Brooklyn, the birthplace of Jay Z, Biggie and Mos Def, which is a great compliment for our city. Offering fifteen-plus tunes, he rocked tracks from his 1999 mixtape, sitting down to spit his heavy lyrical verses, though he was jumping and dancing for most of the show.   Near the climax of the concert, Badass created three mosh pits, conducting three circles to the left, center and rig

While 2014 did not deliver a transcendent rap album on the scale of Kanye West or Kendrick Lamar, the year did demonstrate the many facets of what hip-hop means in the 21st century. Hip-hop was coming out of Hollywood and Harlem, from Australia to the U.K. Schoolboy Q made our top 20 best albums of the year by returning to the golden days of Dr. Dre, when Compton ruled the charts. Rae Sremmurd and YG hit our 20 best songs of the year countdown. But we wanted to dig a little deeper and give you our 10 favorite hip-hop albums of the year. Beyoncé might not strike you as hip-hop, but try telling that to her.  Stream some of our favorite tracks below. Tell us what hip-hop albums you loved in the comments below. 10) Riff Raff Neon Icon The sight-to-see rapper indeed lives up to the album title with his colorful beats and flow. Riff Raff loves to talk about materialistic things—Versace, the candy gloss paint on his car—with awkward, abstract style. His high-pitched voice and interesting lyrics make his braggadocio rap always entertaining.    9) Common Nobody's Smiling Common gives people what he's known best for on this album—an insight into the Chicago streets. He cited the recent media focus on Chicago's violence as inspiration for him to return home. The underrated 13 track album is Common's tenth studio album and shows he can still paint vivid pictures with words.  8) T.I. Paperwork The Rubberband Man did it again by creating another cohesive album executive produced by Pharrel

The UIC Pavilion holds about 10,000 people, but it wasn't a fifth of that number in attendance to see a billing of rappers T.I., Mila J, DJ Mustard, YG and ILuvMAKONNEN. The latter, Mr. "Tuesday", was a no show, however. In whatever case, the show must go on. After two introductions from on-air radio personality UB Rodriguez, the opener came out. Mila J, the older sister of Jhene Aiko best known for her song "Smoke, Drink, Breakup," performed with her dancers and received a good reaction from the crowd. She also premiered her new song with Ty Dolla Sign, who was not in attendance. In between sets, the DJs played songs like Bobby Shmurda's "Hot Boy" and other top 40 hits. One of the DJs showed Chicago some love and played the West Side classics such as PsychoDrama's 1994 cut "Magic." And then DJ Mustard crept on stage. As if it were a basketball game, a pre-recorded track shouted out the measurements of YG, "Standing six feet tall and weighing 160 pounds!" YG rushed to the center of the stage with a hood on his head, declaring, "I'm from B-P-T, BOMPTON!" By this time, more people were in the audience and had gathered toward the center of the floor. The young gangsta (that is what YG stands for) didn't hold back and ran through Mustard-produced album cuts from his acclaimed My Krazy Life as well mixtape joints. As the young rapper is Blood affiliated, he didn't Crip walk, but rather did his own rendition of the West Coast step. "Go, YG! Go, YG!" the crowd and his hype man shout 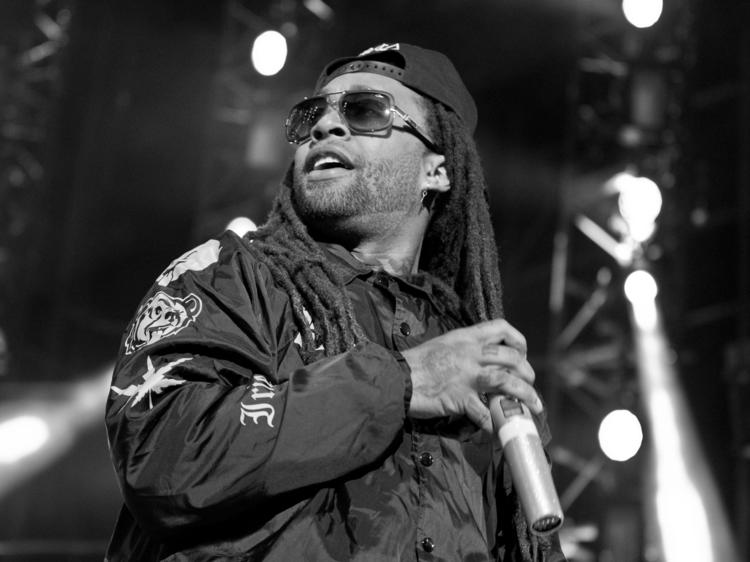 "We're in line about to go see my boyfriend Bibby!" "I can't wait to see Ty Dolla Sign!"  This was the gist of the conversation overheard in line for the VIP Meet and Greet outside Bottom Lounge on a cold Thursday night. The full house, with a large percentage of female fans ranging from teenagers to grown women, was gathered on Lake Street to see Ty Dolla Sign on his In Too Deep Tour. The LA singer-rapper-producer brought along local star Lil Bibby, as well as Alex Wiley from Closed Sessions and Mic Terror from the Treated Crew camp. The Chicagoans got the crowd hyper and ready for the main act, but it was a bunch of surprise guests that made for an action packed night. Lil Bibby began his set with his popular song "Water." That had the room going crazy as he and his entourage, all dressed in Free Crack 2 gear, took the stage. Midway through his set, he brought out frequent collaborator and fellow rapper Lil Herb as they ran through their song "Kill Shit" and Herb did a few other verses. But then things got really chaotic. Chance the Rapper, Spenzo and Jeremih came out during Ty Dolla Sign's set leading to an insane reaction from the crowd. Chance, wearing overalls, performed "Cocoa Butter Kisses," and Jeremih did his latest single, "Don't Tell Em." Chance may be hanging with Madonna these days, but Ty cited Spenzo as one of his favorite rappers. Spenzo performed on two cuts, one being his most known, "Wife Her."   Though Dolla Sign comes from California, the 29-year-old has