Sugar in Our Wounds

Theater review by Juan Michael Porter II  Three slaves on the cusp of adulthood pursue their sweet, horny and rebellious desires in Donja R. Love’s powerful Sugar in Our Wounds, set on a Southern plantation in the smothering summer of 1862. Surly newcomer Henry (Chinaza Uche) is seduced by Mattie (Tiffany Rachelle Stewart), the much-abused mulatto daughter of the plantation master, but finds himself drawn to the guileless James (Sheldon Best), who coaxes him to sleep with a soothing lullaby. Every man in James’s family has been lynched on the gargantuan tree that dominates Arnulfo Maldonado’s set. Somehow, he hears their collective voices through the tree; Henry comes to hear the tree, as well, and the two men are soon kissing with a tenderness that belies the brutality around them. The sensible Aunt Mama (Stephanie Berry) helps James embrace his feelings for Henry, which sends the tree singing “LOVE!” (in Mykal Kilgore’s jubilant voice). But this joy is dampened by an ominous warning of what will happen if the wrong people discover their “loathsome” desire. The challenge, as Aunt Mama says, is to “Turn dis ugly inta ya beauty.” Like Zora Neale Hurston, the playwright has taken ethnographic pains to expertly capture the speaking patterns of his characters, and director Saheem Ali weaves together a world that feels like real life, even when the action branches into the supernatural. His ace collaborators include costumer Dede Ayite, choreographer Darrell Grand Moultrie and hai

Theater review by Juan Michael Porter II A luxury hotel in Switzerland plays host to overlapping psychodramas in Amelia Roper’s revealing Zürich. Set in adjacent and nearly identical rooms, each of the play’s five scenes—which we soon realize take place simultaneously—ends in darkness and the ominous sound of an explosion; as the play reveals what is happening in the adjoining rooms, we piece together the sequence of events that brings us to those blackouts. The audience watches through panes of glass, as though spying through the characters’ 14th-floor windows. In the first scene, a self-involved young banker bro (Paul Wesley) refuses to leave the room of the woman (Juliana Canfield) with whom he had a drunken one-night stand the night before. (He insists the room is his.) In the next, a handsome African-American man (Austin Smith), recently promoted by his ethically dubious employers, takes out his ambivalence on the miserable but eager-to-please maid (Carolyn Holding) he has summoned to clean his bathroom. Meanwhile, a 13-year-old girl (Samantha Cutler) and her 11-year-old brother (Gregory Diaz IV) annoy each other with gross-out antics, then suspend hostilities when they discover something shocking in their parents’ luggage. In a series of frustrating phone calls, a German-Jewish woman (Renata Friedman) tries to extract information from a shady Swiss bank about a lost account belonging to her grandmother, who was murdered by the Nazis, while her adorable young daughter (S

Theater review by Juan Michael Porter II Who is minding the black caretaker’s son while she is babysitting yours? That’s the discomfiting question framed in Greg Keller’s Dutch Masters. Set in pre-Giuliani New York City, the play borrows its setup—charming bully versus guileless cipher—from Edward Albee’s The Zoo Story. On a subway ride, Eric (Ian Duff) recognizes Steve (Jake Horowitz) as the boy his mother used to nanny years earlier; without revealing his identity, he lures Steve back to his apartment to play games of psychological retribution. Director André Holland crafts powerful stage portraits that play on Duff’s swaggering buff blackness and Horowitz’s timid, well-meaning whiteness; their physical interaction suggests a tense game of chess that keeps threatening to spill over into violence or sex. The actors’ blistering performances all but strip the paint from Jason Simm’s elegantly designed set, but although their star turns yield moments of heartbreaking drama, Dutch Masters remains a one-note issue play. The basic situation is implausible—it is unlikely that any amount of charm could move a 1992 white boy to disembark at 145th Street to smoke a blunt with the aggressive black stranger who keeps interrupting his book-reading reverie on the train—and the back-and-forth interrogation that ensues seems formulaic. Keller is trying for a nuanced conversation about race; having characters who actually spoke to each other would be a good place to start. The Wild Project ( 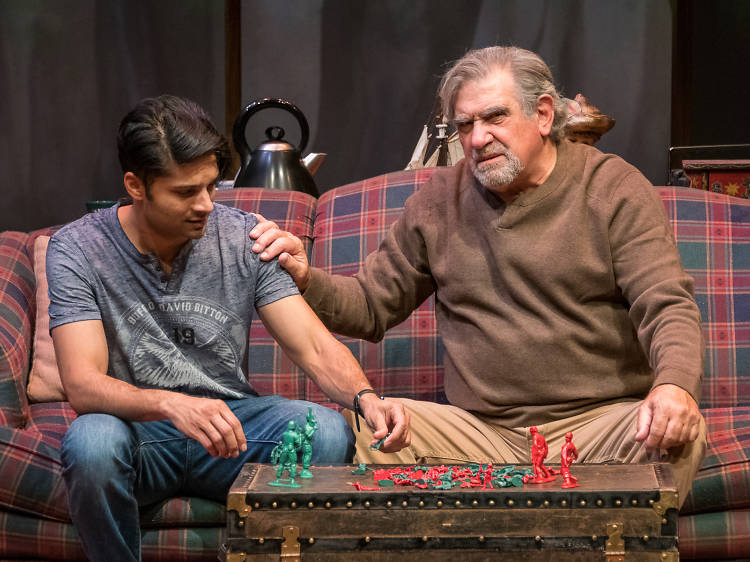 Theater review by Juan Michael Porter II   Buried under long passages of nonsense in The Stone Witch is a moving tribute to confronting one's heroes. Set in a magnificent cottage—designed and populated with fantastical illustrations by Yael Pardess—Shem Bitterman's drama revolves around Simon (Dan Lauria), a once-great children's writer and illustrator whose editor, Clair (the terrific Carolyn McCormick), sets him up with a young assistant, Peter (Rupak Ginn), in the hope of extracting one last book from her difficult and writer's-blocked star client. The larger-than-life Lauria jolts his every scene to life with puckish glee, in a King Kong–size performance that pays homage to stage titan Zero Mostel; McCormick humanizes her "barracuda in Armani" character with an arch precision that offsets the fawning Ginn, whose portrayal of a struggling writer meeting his childhood idol is a touch too twee and forgiving of Simon's abuse.  The problem is Bitterman's focus on mental illness. When depicting insanity onstage, anything can happen and frequently does—but the mere absence of reason is rarely interesting. Director Steve Zuckerman coaxes honest reactions out of his performers, but watching Peter repeatedly struggle with Simon's hallucinations grows exhausting as they slog through the largely meaningless confusion. When doing something other than wrestling with ghosts, Lauria is mercurial, bullying and entertaining in the way that the most brilliant person in your life always is.

Theater review by Juan Michael Porter II Grappling with midlife “conscious uncoupling” promises to unleash all sorts of demons in Geraldine Aron’s Olivier Award–nominated 2001 play My Brilliant Divorce. That no monsters end up appearing in this potentially hilarious vehicle for a woman of a certain age has everything to do with Melissa Gilbert’s miscasting as a Jewish Anglophile done dirty by her “round-headed” husband. Playing Rachel, a woman who rebelled against her yenta mother by marrying a Brit, Gilbert comes off as a sweet shiksa milquetoast, knocked flat by the sudden turn of events but without a proportionate sense of rage; she is delightfully engaging, but has none of the conspiratorial vengeance one craves from the jilted Rachel. (This is true even when she is mocking the shortcomings of her ex-husband’s anatomy.) Directed by Aedín Moloney with cutesy musical rim shots interspersed throughout, Divorce is essentially a live-action therapy session between the audience and leading lady as she cycles through the stages of grief. In the tradition of self-deprecating Jewish girls, Rachel has an arsenal of comedic lines at the ready, to deflect her pain in these bitch sessions. But Moloney and Gilbert have not worked out the timing to keep these humorous bits rollicking; instead, they slow things down, perhaps because Gilbert is at her best when Rachel is confronting her loss of identity and purpose. In such moments of vulnerability, one sees the lovely little play that G 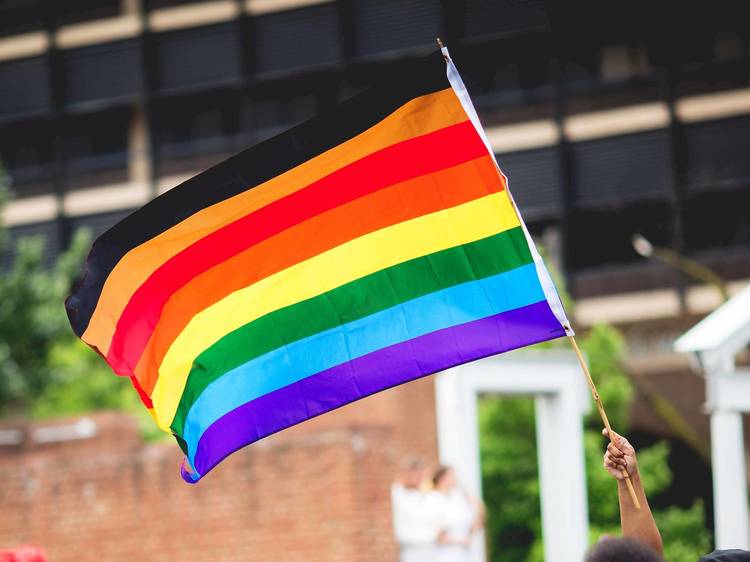 Juan Michael Porter II has written for TheBody, NY Observer, Time Out Theatre, TDF Stages, American Theatre Magazine, and HuffPost. It’s hard to believe, but there has never been a global pride event dedicated to the Black LGBTQ+ community. Fifty-two years ago, Black trans-activist Marsha P. Johnson helped launch the Gay Power movement at Stonewall, and yet pride celebrations around the world have remained overwhelmingly centered on whiteness. In keeping with the fight to dismantle white supremacy, Global Black Gay Men Connect (GBGMC) has stepped up to challenge that erasure. Starting at 7am on July 10, the group is kicking-off a twelve-hour-long virtual celebration of the global Black LGBTQ+ community. For three hours at a time, the roving pride event will move from Africa to Europe, the Caribbean and South America, and finish in the US. More than a parade, it is a joyful riot against existing power structures that continue to dismiss the importance of Black lives. As GBGMC founder Michael Ighodaro put it, “This space has always been led by white gay male individuals, so we feel like it's time for us as a group to say that Black Lives Matter; ALL Black Lives Matter.”  What is often ignored in the context of this current civil rights movement is that Black LGBTQ+ individuals not only have to negotiate racism, but they are also subjected to violent sexual discrimination within their own communities, targeted for existing in “white gay spaces,” and are ignored by authorities wh