Taking advantage of Switzerland's incredible mountain scenery is a must for those willing to scale the epic Alpine peaks and the more casual explorers. In fact, Swiss passion for mountain engineering has resulted in some outstanding attractions, such as Europe's highest train station, Europe's longest tobogganing track, and the world's first Cresta Run. So put on your woolly mittens and check out these high altitude revelry. 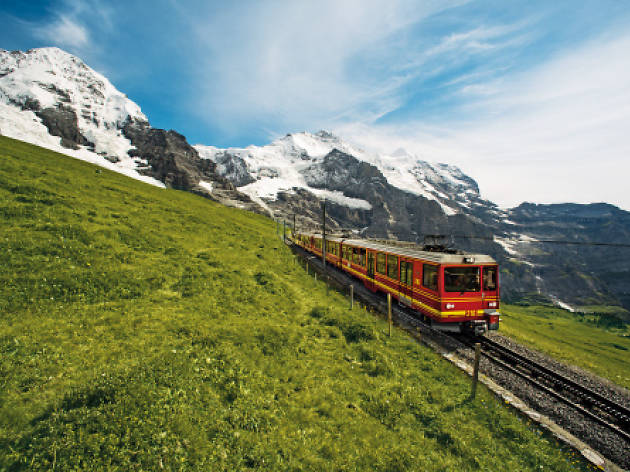 Towering above Switzerland at 3,454 meters, this is the highest train station in Europe. Nestled at the foot of the Jungfrau summit and surrounded by the largest glacier in the Alps, Jungfraujoch has been a top Swiss attraction since the station’s completion in 1912. To complement the spectacular views on offer, there are a number of restaurants and cafes dotted around the site, but be prepared for the premium costs that you might expect from businesses operating in such a remote location.  Tunnels connect the station to other attractions atop the Bernese Alps, such as the Sphinx observation, one of the highest observatories in world. If the unfortunate happens and visibility is limited, there’s also the Ice Palace and Ice Gateway to keep you busy, as you navigate around man-made ice structures that resembles something out of a villain’s lair from a Bond film. Bearing in mind that the air is thin, the temperatures stay cold, and the train ride from Kleine Scheidegg takes two-and-a-half hours, Jungfraujoch is an attractions that's worth the journey. 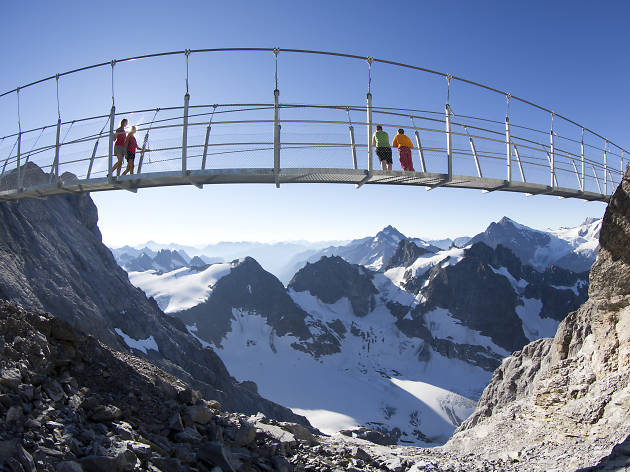 Located at Mount Titlis in the Engelberg region, this 100-meter-long pedestrian bridge is not for the vertigo-fearing faint hearted. Built between two cliffs at 3,000 meters above sea level, this marvel of engineering is the highest suspension bridge in Europe, and was built to mark the 100th anniversary of the Engelberg-Gerschnialp cableway that has been operating since 1913. The real treat is the 500 meter drop when standing in middle of the bridge, as directly below you is the outstanding view of the Titlis glacier park. In addition to the breath-taking scenery, you can explore the ethereal Glacier cave, dangle your legs over the Ice Flyer, a ski lift designed to carry you over the mountain peaks, and travel on the Rotair gondela, the world’s first revolving cable car. 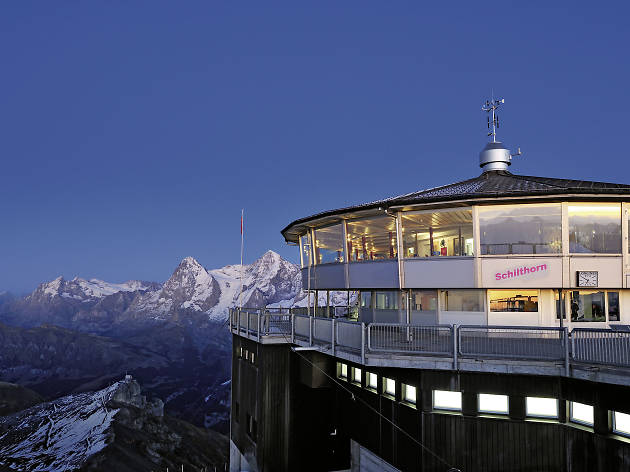 Fancy a meal with a setting epic enough for a James Bond movie? Then all you need to do is travel up 3,000 meters to the peak of the Schilthorn Mountain and enjoy the 360 panoramic views of what is claimed to be the world’s first revolving restaurant. For non-mountaineers, you can breathe a sigh of relief as the Schilthorn cableway offers a 7000 meter journey to the mountain summit, but be prepared to for a pricey dining experience. There’s also an interactive James Bond exhibition detailing how the site became a shoot location for the 007 film ‘On Her Majesty's Secret Service’ in 1969, a great way to enjoy you Martini cocktail whilst engaging in a shoot-out with terrorists on a virtual bobsledding ride. Should you want a walk in the fresh mountain air, the Skyline View Platform will give you a chance absorb the stillness of the Swiss alps atop a truly iconic restaurant. 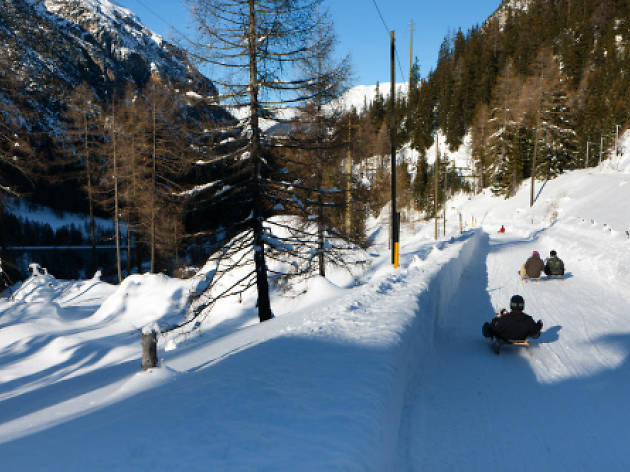 Hurling yourself down a mountain at high velocity may not be the calmest method of transport, but it’s certainly the most exciting. For thrill seeking travelers etching to turn the mountain valleys into their own speedway, this toboggan ride is a must. Illuminated at night, this 6 kilometer stretch run from Preda to Bergün, and is Europe’s Europe’s longest floodlit toboggan run. Getting to Preda is an adventure itself, as Rhaetian Railway travels past the stunning 90 metre-high Solis viaduct, the Landwasser viaduct and goes through Albula tunnel. Equipment can be picked up at sport rental facilities in Preda along with other amenities, and once you had your white-knuckle dash down to Bergün, you can take the train back up to Preda. 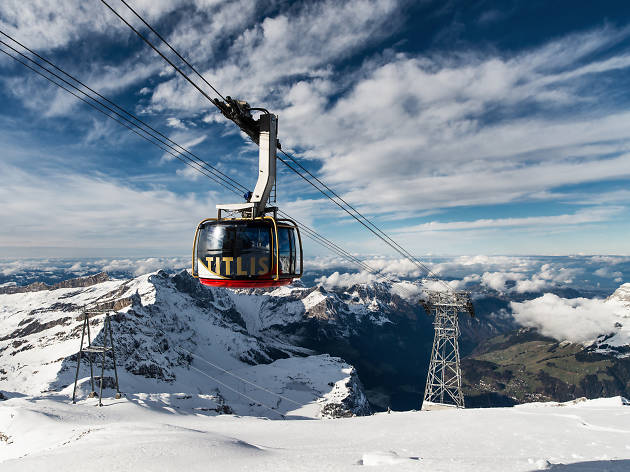 This is the world’s first fully rotating gondola, which slowly spins around 360 degrees during its five-minute trip towards the summit of Mount Titlis from the Engelberg resort. As you travel up 3,020 metres above sea level you can enjoy some spectacular views of deep crevasses and snow-covered mountain peaks. The various restaurants and snack bars at the top mean you can linger on whilst enjoying the views over the central Alps before heading back down. 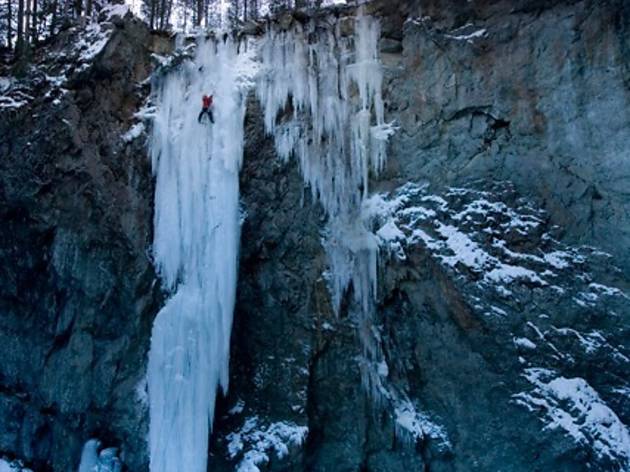 For those who want an edge to their Switzerland adventure, frozen wateralls offer a more active way to get around for those fit and brave enough to climb it. Set in Pontresina, these ice-clad rock walls allow climbing enthusiast to scale the cliffs around this idyllic mountainside town. Climbing gear, experience and a high fitness level are required for this attraction. Mountain guides spray water on the ice to maintain the optimal thickness, but even so climbing is still recommended in the winter months. There’s even a Ice Climbing Festival in February, making it a perfect time to celebrate and participate in all things ice and mountainous. 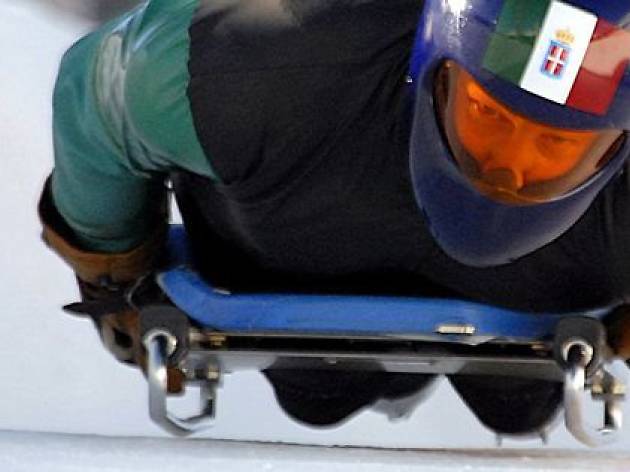 Located in the picturesque town St. Mortz, this 1.2 km stretch of Cresta track is where it all began in the late 19th century, when British soldiers skeleton raced down the town snowy slopes. Now as fervently Swiss as the cuckoo clock, the Cresta Run offers a 130 km/h, body-flattening ride that piles enough G-force to match any rollercoaster. The Cresta opens before Christmas, and continues until spring, but you have to apply to be allowed on the course, with beginner classes costing CHF 600. But beware, on top any potential injuries that can occur, there’s also having the risk of running into the track’s notorious Shuttlecock corner, with the penalty of automatically being inducted as a member of the Shuttlecock Club, as well as being obliged to wear a Shuttlecock tie. Of course if you’re not into such daring of attractions, you could just soak up the winter sports history that lies in Cresta Run’s past, when it served as host for both 1928 and the 1948 Winter Olympics. 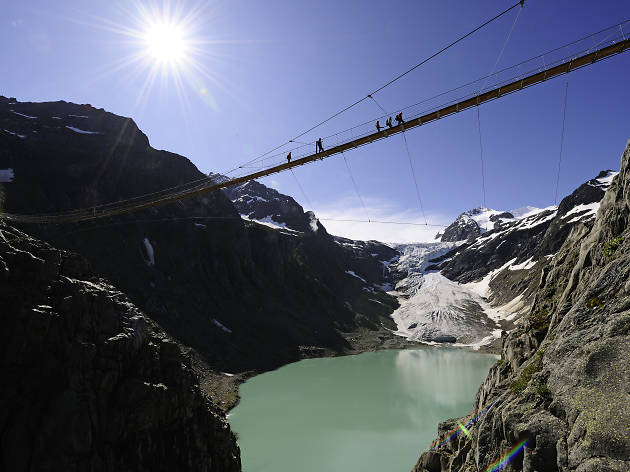 A solution born out of the Switzerland’s changing environment, this 170 meter long pedestrian suspension bridge allows intrepid hikers to complete the Trift mountain route without the Trift Glacier serving as a natural crossing. Yes, global warming may have reduced a mighty glacial formation into a mere snow mound, but now the Trift Bridge has gone on to become a popular tourist attraction for adventurers, offering a spectacular vantage point of the ever disappearing glacier and the dramatic surrounding landscape. To get to the bridge, you first need to get the Trift aerial cable car to the Trift valley, followed by a 90 minute hike to the Trift Glacier. Past the bridge lies the Trift Hut, the hikers end point for the Trift route, and a great place to admire the beauty of the rugged marvels of the Swiss Alps. 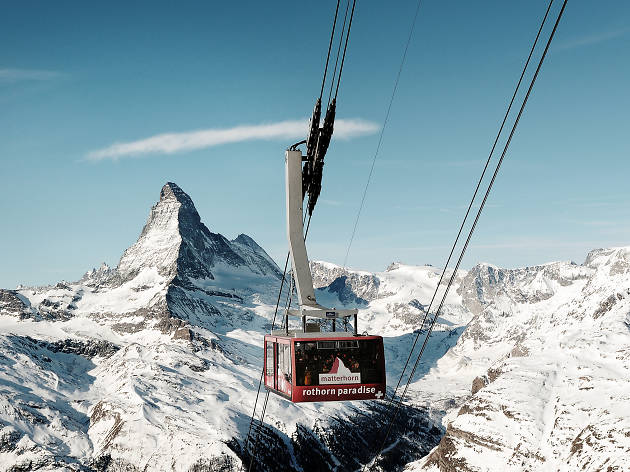 Matterhorn’s pyramidal shape dominates Zermatt’s skyline and tourism, attracting both thrill seekers and casual explorers to its foreboding peaks. Only expert climbers with the best equipment and knowledgeable guides are recommended to climb this mammoth, but for the more relaxed adventurers, there’s always the Klein Matterhorn cable car that takes you 3,883 meters up to Europe’s highest viewing platform, along with restaurants, a hotel, a winter sports region and Europe’s highest seminar room, making even the more dull presentations a little bit more exciting. 2015 marks a special year for the mountain, as it is 150 years since a British climber Edward Whymper became the first person to reach the 4,478 metre summit of the Matterhorn in 1865. So to celebrate this momentous anniversary, festivals and exhibitions will be held throughout the year, as well as the re-opening of the mountain hut Hörnli Hut.

Get away from it all in the mountains this winter 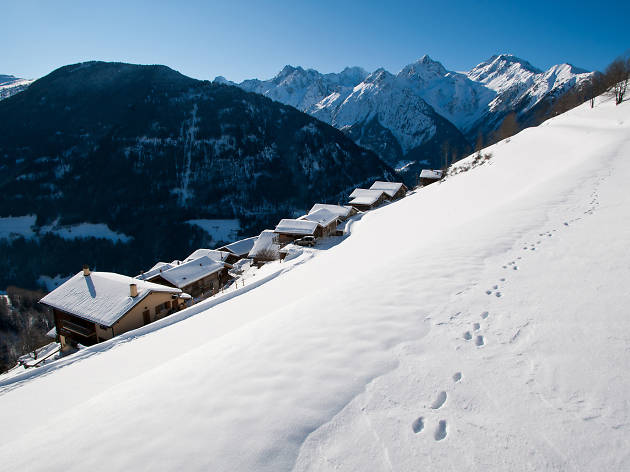 Winter has always been a season to celebrate in Switzerland, thanks to the stunning mountainside accommodation – and winter hideaways are perfect spots in which to soak up the magnificent Swiss countryside. But how do you find your ideal hideaway? By reading on, because Time Out has handpicked some of the finest winter-ready hotels from across the country.