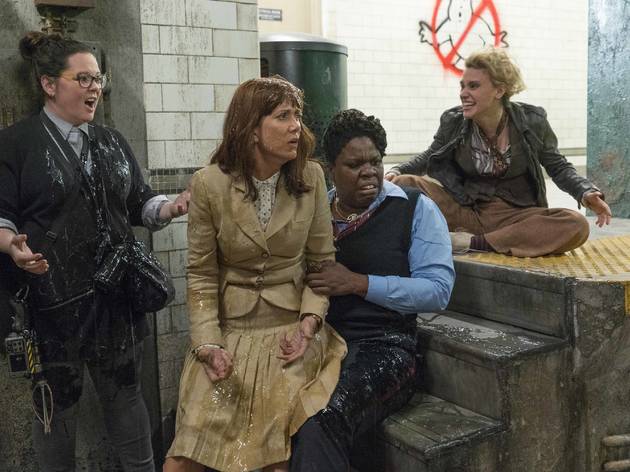 For this new Ghostbusters, director Paul Feig (Bridesmaids), working with his regular screenwriter Katie Dippold, has dropped the deadpan, blue-collar schlubbiness of Murray and the gang. But he adds a sharp sense of sorority, turning this rethink into something appealing on its own terms. This is a stealth battle of the sexes that involves mansplaining college deans, a haughty New York mayor and a phalanx of male soldiers – all neutralised by a core team of four imaginative women.

Melissa McCarthy and Kristen Wiig play Abby and Erin, co-authors of an embarrassing paranormal study, the 460-page Ghosts from the Past: Both Figuratively and Literally, who are drawn back together after Erin’s academic career fizzles out. Evil vapours haunt New York’s underground, bringing a tough subway worker (Leslie Jones) into the fold. For a moment we think they’re returning to the old Tribeca firehouse – but the rent’s way too high, so they settle for an office over a Chinese restaurant.

But it’s Kate McKinnon’s rascally, plastic-goggled Holtzmann – loosely based on Harold Ramis’s geeky spore collector – who absolutely steals the movie. Holtzmann is a terrific creation of pure physical comedy: all mock-triumphant gestures, sly winks and verbal slurs launched to a crowd of one in her head. She’s the best reason to see the film.

The movie starts off wobbly, and pays just a little too much homage to the original: the Stay Puft Marshmallow Man is back, along with an endless stream of call-back cameos that mostly just distract. And the vivid sense of seen-it-all NYC, so pungent in the original, is weakened here. Where are the cheering crowds of proud New Yorkers? Regardless, here’s a tentpole movie starring a girl squad who are proud of their big brains. You could call that a supernatural event in itself. - Joshua Rothkopf

Who cares if they’re women? This film is good in its own right. I mean, ok, it’s not a masterpiece, but it’s actually quite good fun.

Full of energy, the cast makes jokes after jokes and delivers perfect laugh-out-loud moments. If you’re a fan of the 80s version, you’ll love the cameos and references. If you’re a newbie, this is a good comedy film.

If the story is rather predictable, the gang of smart but utterly dorky women still carries it through.The only downside would be the CGI-fuelled ending that lacks in oomph and deserves the movie a little…