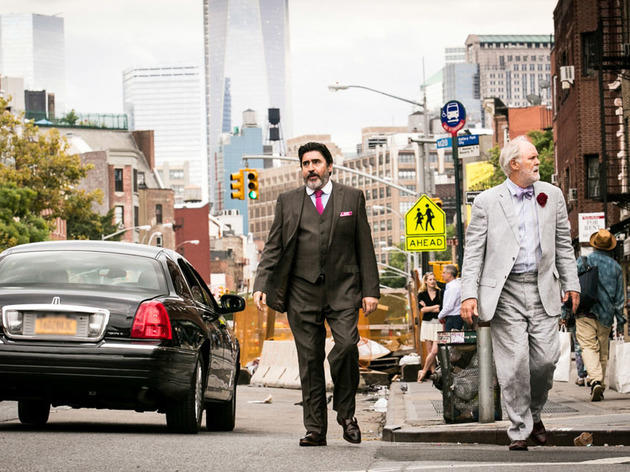 New York-based filmmaker Ira Sachs (Keep the Lights On) creates a special kind of urbanity: softer and more inclusive than Woody Allen's, openly gay but family-focused, alive to the city's tensions and lulls. His latest movie also features a Chopin piano score, adding an exquisite sense of proportion to, what in the hands of most other directors, might have felt like a cautionary tale about the perils of gay marriage. Instead, Love Is Strange emerges as a total triumph for Sachs and his co-leads, John Lithgow and Alfred Molina, who, despite lengthy filmographies, turn in career-topping work.

Chatty painter Ben (Lithgow) and his music-teacher partner of nearly four decades, George (Molina), tie the knot in an idyllic, understated ceremony. The afterpary that follows – both men at the piano laughing, lasagna and heartfelt toasts being served – steers the movie economically onto accepting territory. But the outside ramifications are harsh: George's Catholic academy is forced to fire him and, only weeks after celebrating, the two find themselves cash poor, unable to maintain a mortgage and out of their elegant apartment. "Are you guys getting divorced already?" jokes the assembled clan when they break the news and ask for temporary shelter. Ben goes to his nephew's family (and a teen's bunk bed) while George crashes on the couch of a younger gay cop's boisterous party pad.

The film is too intelligent to turn into a sitcom of chafing sexual lifestyles. Rather, Sachs's nuanced theme is privacy, as relatives squirm not at their gentlemanly, staid houseguests but at their loss of space, while the separated lovers feel the awkwardness, too. Their relationship has been an endless conversation, and that's what's been interrupted most harmfully. (Lithgow and Molina convert their many chats into virtuoso arias of understated teasing, confession and regret.) It's a heartbreaker that Sachs sets their schism right at the moment when Ben's advanced age becomes an issue, cementing Love Is Strange as a sensitive domestic tragedy about the finite nature of any union.

The supporting cast is superb, particularly Marisa Tomei's novelist mom who, with gentle restraint, comes to see Ben as a threat to her concentration. But it's sullen child actor Charlie Tahan who nearly steals the picture in a quietly devastating climax, a private breakdown that suggests Ben and George may have affected everyone more deeply than they know. The kid then coasts down a city street on his skateboard to the setting sun, providing Love Is Strange with one of its most powerful images (in a film full of them). It's an essential – and essentially New York – story about limited room, limited time but incalculable attachment.