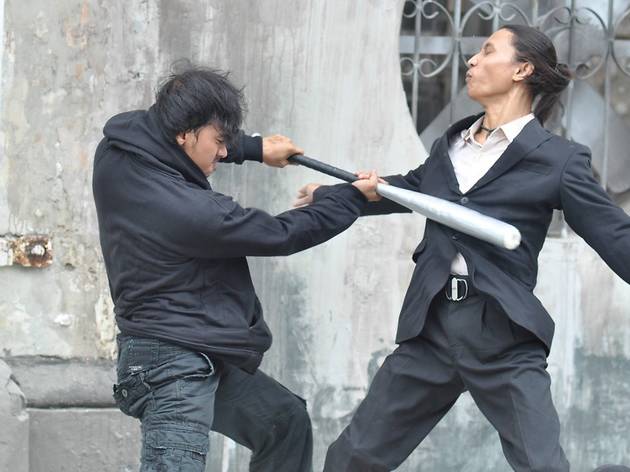 Delirium awaits action fans with British director-writer-editor Gareth Evans's intoxicating sequel to 2011's The Raid – another Indonesian gangster film that alternates sequences of groundbreaking (and bonebreaking) combat with scenes of the most boring conference meetings imaginable. Almost laughably, there's a plot here, mainly unrelated to the first film, involving a cop gone undercover (Iko Uwais), a gangster's showboating son (Arifin Putra) and a limping criminal overlord with a fetish for black leather gloves (Alex Abbad). Evans can't pull off a simple conversation to save his bacon, and his unnecessarily complex The Departed–style setup reveals a desperation to be taken seriously.

He should rest easy: no other filmmaker on the planet can touch Evans for long-take beatdowns and wildly inventive flourishes that call to mind Jackie Chan's heyday with 1992's Supercop and little since. That's accomplishment enough. You'll hear your crowd's first wave of stunned applause after a muddy prison-yard skirmish that results in a sizable diminishment of the inmate population. (When a police chief complains about "bodies piling up all over the city," he's not exaggerating.) As the film plays on, the artful brutality –never less than intense – varies only in terms of its setting: a warehouse, a four-door BMW's interior, a subway car, an industrial kitchen, etc. Staminas are superhuman and the aesthetic is close to a live-action videogame, programmed with a refreshing eye for topographical clarity.

Occasionally, Evans tries to mix up his tone; he's still working on that. An ill-advised use of Handel's stately "Sarabande" will either bring to mind Stanley Kubrick's Barry Lyndon or trigger unintentional laughs at the unearned somberness. There's exactly one joke in the entire two-and-a-half-hour epic, when a henchman whose weapon of choice is a baseball bat hits a few balls with fatal precision. Expecting strong female characters is a fool's errand, and the only nod in that direction is a hammer-wielding angel of death (and, less prominently, some karaoke girls). Regardless, only viewers with zero appreciation for the genre will leave unimpressed; devotees should add approximately six stars to the rating above.