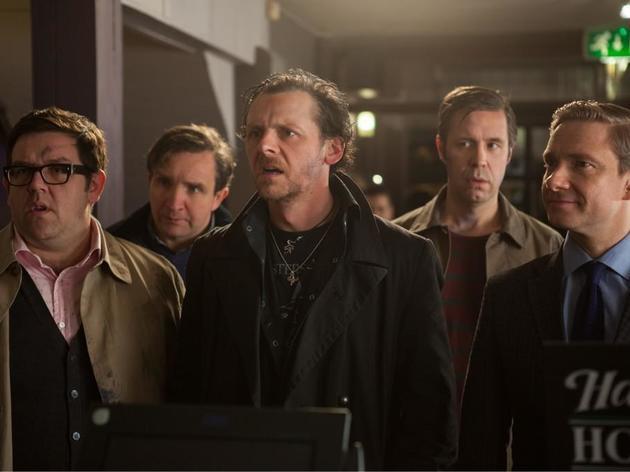 Director Edgar Wright and his co-writer Simon Pegg get the band back together for one last bite of the Cornetto. If the setting is familiar – small-town southern England, all cheery bobbies and Tudor frontages – the themes are even more so: this is another tale of emotionally stunted boy-men struggling to find their way in an unfriendly universe. But this is a tighter, smarter film than either Shaun of the Dead or Hot Fuzz, and buried beneath all the blue-goo aliens and terrible punning is a heartfelt meditation on the perils and pleasures of nostalgia.

Pegg plays Gary King, a legend in his own packed lunchtime turned lonely social outcast, who reunites his four best mates to re-enact a fondly remembered sixth-form pub crawl. But said companions – Andy (Nick Frost), Oliver (Martin Freeman), Steve (Paddy Considine) and Peter (Eddie Marsan) – have all grown up, and have proper jobs, families and flash cars. And that’s not all that’s changed – the town itself is not quite as they remembered it. All the pubs have turned corporate, and why are those hooded teens acting so suspiciously?

Pegg and his co-star Nick Frost have become rather too cosily defined in the six years since Hot Fuzz – Pegg as the cheery Brit-geek, Frost as the lovable lug. Both deal with that overfamiliarity head on here, in very different ways. As Gary, Pegg boldly plays up all the most aggravating aspects of his persona; it’s hard to remember a movie hero as unashamedly obnoxious as this. Frost’s Andy, though, is something more complex, a kind man trapped by circumstance. It’s a likeable, unexpected performance.

Like its predecessors, The World’s End is patchy – some of the goofier gags fall flat, and too many of the characters remain undefined, notably token love interest Sam (Rosamund Pike). Meanwhile, Pegg flirts dangerously with bearability: yes, we recognise and understand Gary’s flaws, but it can still be hard to resist the temptation to punch the screen.

But the film is carried through on sheer, giddy energy. Wright has upped his directorial game in the wake of Scott Pilgrim vs The World, and after the halfway point the pace doesn’t flag for a moment. It all comes together beautifully in a last-ditch triple-whammy of shock revelations – the first surprisingly dark and moving, the next deeply silly and slightly questionable, the third simply barmy and brilliant. The film may dwell on the past – on youthful indiscretion, proper friendships, old-fashioned pubs, British teatime sci-fi and reckless boozing – but it does so in the sober knowledge that, for Wright and Pegg as much as for their characters, that world has indeed ended.

Simon Pegg and Nick Frost on The World's End