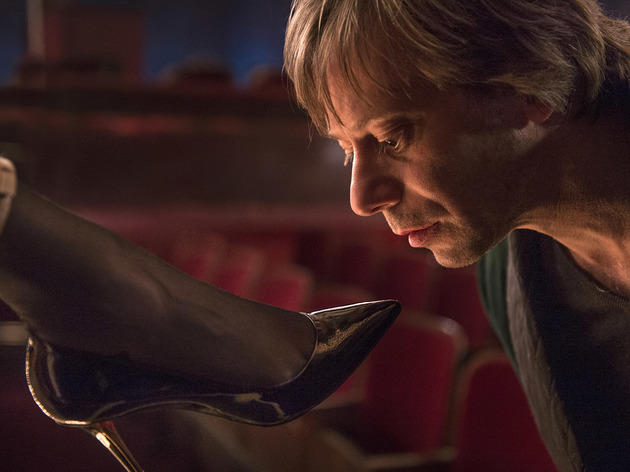 Welcome to Roman Polanski's hall of mirrors. David Ives' play Venus in Fur is a two-hander, set in a theatre, about a director auditioning an actress for a play based on a novel – a tricksy, teasing story about dominance and submission. As if that wasn't heady enough, Roman Polanski muddies the waters further. Not only does his film Venus in Fur stand on such sandy foundations, but he's cast his own wife, Emmanuelle Seigner, as the actress, Vanda. His choice of Mathieu Amalric as the fledgling director, Thomas, with his dark hair flopped diagonally over his face and his jacket worn over t-shirt, surely nods towards a younger version of Polanski himself.

Venus in Fur is about seduction, power and sex. Like a snowball gathering new meanings through its different incarnations, Polanski's multi-layered version has one foot in the real world and one in the world of play-acting, art and literature. Both funny and strangely sensual, it begins with the air of a throwaway screwball comedy and ends up more weird and biting. A late image of Amalric smeared in lipstick and wearing high heels even brings to mind the gender-bending mind games of Nicolas Roeg's Performance.

Polanski's last film, Carnage, was also a movie of a play, set entirely in one place. But while that started out settled and descended into chaos and farce, Venus in Fur begins with a touch of light hysteria and becomes more refined and mysterious. As Vanda and Tom audition together, their lines alternating between the script and real life, we see the aristocrat in the play of Leopold von Sacher-Masoch's novel Venus in Furs fall for a woman who causes him to replay the physical submission he experienced as a child. We also see Thomas fall for Vanda, and Vanda discovers how to control Thomas. A streak of S&M runs through the whole thing.

You wonder at first if, at 46, Seigner is too old to play this 'young' actress. But that, too, becomes part of the game. She looks younger as the film goes on. She becomes more subtle as a performer, as does Amalric. These are both thoughtful, ever-mutating performances. In the end, we feel embarrassed to have thought that Seigner was past it – Polanski has made us complicit in Thomas's initial rejection of Vanda.

In the end, the biggest seduction of all is over us. It's how Polanski's film trancends those four walls and its inherent talkiness, by throwing its ideas out to us as a challenge. Our worries are strong early on. Is this just a dry academic exercise? Is Seigner right for the role? Do we want to be stuck inside a theatre for an entire film? As the actors move fluidly between various states, shedding one skin while assuming another, Polanski makes this subversive parlour game matter.