We Are the Best! 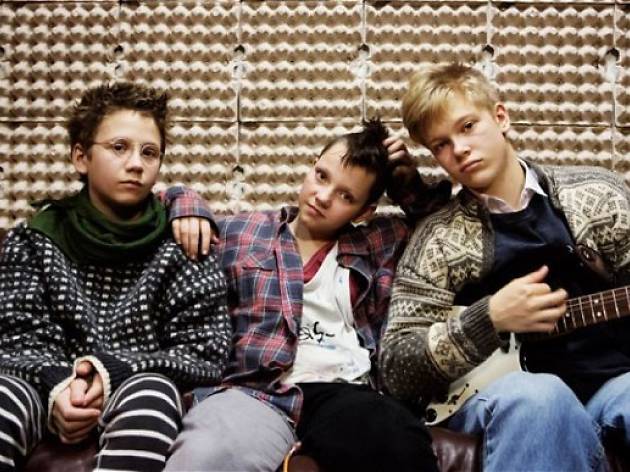 In Sweden, Lukas Moodysson is considered as punk rock as the subjects of his latest flick. His 1998 debut, Show Me Love (also known as Fucking Åmål), was about two teenage girls falling for each other in an uninspiring town (that’s Åmål), and made him a subversive name in his home country. A few movies later he presented us with Lilya 4-ever, about a young Estonian girl kidnapped into sex slavery. It could have been salacious, but it showed a nuanced empathy for the opposite sex – he considers himself a feminist – and perhaps also a propensity to being drawn back to his formative years. “Maybe I’m childish,” he admits to Time Out.

There’s the theme of music, too. Together (2000), was set to a soundtrack of Swedish prog and pop and followed life in a ’70s commune, while We Are the Best! tracks a tweenage punk band with almost documentary-like precision.

Based on a graphic novel by his wife, Coco, which in turn is based on her own childhood band, it follows an unnamed, unmusical trio who only form a band in the first place to give two fingers to the heavy metal boys hogging the music room – and then, true to the antiestablishment ethos of punk rock, they’re insistent that they not be called a girl band.

Burgeoning activist Bobo (Mira Barkhammar) and her sidekick, the reckless Klara (Mira Grosin), recruit classical guitarist Hedvig (Liv LeMoyne) to flesh out their odes to nuclear fear and hatred of PE class. Hedvig, like Moodysson, is a Christian, and her bandmates’ efforts to rid her of this blight makes for scenes both so funny and so realistic that you’ll forget the young cast are acting.

“One time I laughed so much I had to leave because I was ruining everything with my loud laughter,” Moodysson says. “It's important to allow yourself to be surprised. It's fun when things happen that I did not plan.”

Back in 1982, Moodysson was a young poet who loved Swedish punk band Ebba Gron and goth rockers the Cure, so he rather got to live vicariously through We Are the Best!. “It was the closest I’ve got to being in a band and making music,” he acknowledges. “I always consult with a lot of people, including musicians. I try to be a very kind dictator. Sometimes I leave the room and let someone else do my job; some of the scenes in all of my films are made without my presence. I just felt that I was deciding too much and had too many opinions, so I left and did something else.”

When the young trio are booed for their lack of musicality at the annual band competition in another town, Västerås, they ark up at the crowd’s lack of imagination. It’s a scene lifted from Coco’s own experiences, but it’s also one of many points Moodysson seems to be making about the rigidity of Swedish society, in which conformity and following the rules are encouraged.

Progressing through We Are the Best!, an eerie impression emerges of how each girl may wind up: the sensible Bobo could end up conforming and burying her past (although, given that she is based on Coco, that’s not the case); Klara would likely become a crime statistic, while Hedvig might come out of it completely transformed. Certainly, it's rather awe-inspiring to see each girl bloom with confidence before our eyes.