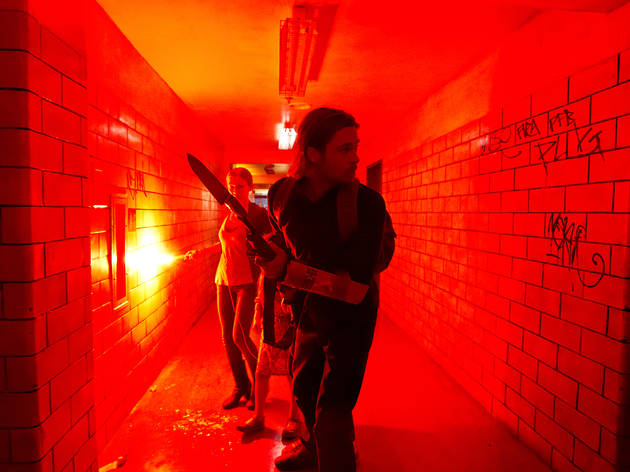 So here it is: Brad Pitt v zombies. The traditionally low-budget zombie genre has been treated to a blowout $200 million blockbuster makeover. The result looks less like a horror flick and more like a thinking person’s action-thriller.

The film is adapted from Max Brooks’s novel, and Pitt stars as a UN investigator on a global mission to find patient zero in a zombie epidemic. That eye-popping budget buys some mindblowing scenes – the best are skin-crawlingly nightmarish shots of a swarm of zombies over-running a city like truckloads of ants in a garden. But $200 million should have stretched to a third act – set in a laboratory in Wales – that doesn’t look like something you’d watch on SBS in the wee hours. And by the end, the pulse of World War Z is pretty weak.

It begins with some sharp thrills and jolts. Director Marc Foster (Quantum of Solace) doesn’t hang about. One minute Pitt (who’s just quit the UN to be the hottest dad on the school run) is driving the family into the city. Then bam. The first wave of zombies hits. These scenes inspire a cold sweat. Obviously science leans against the likelihood of a zombie epidemic wiping out a chunk of humanity – but, watching the anarchy here, you can well believe that if something bad does happen, we’ll retreat to the Dark Ages in 15 minutes.

There are shades of real-world thrillers like Contagion or Children of Men as Pitt is recalled to the UN and packed off with a viral expert to find the source of the outbreak. First stop is South Korea, where we get a sense of how governments are responding. North Korea has the genius idea of pulling out people’s teeth (think about it). Israel took the threat seriously early on and put itself into quarantine. Pitt suspects they might be to blame, but the truth is subtler. All this unfolds between explosions and the splatting of undead brains. Wearing an Arab scarf, Pitt is totally convincing as a veteran of conflicts in Liberia and the Balkans – half bleeding heart liberal, half tough guy.

What’s missing is a sense of loss – the horror and grief that should be etched on the faces of the living. As for that third act, you’ll be breaking into Shaun of the Dead giggles at the sight of In the Loop's Malcolm Tucker watching middle-aged men in labcoats chase Brad Pitt around the set of All Saints.