When we first met César Ordóñez in 2013, he told us about his ‘Tokyo Blur’ photo series. He told us that ‘the out of focus portion of the pictures represents this space I feel between myself and the world around me when I’m in Tokyo. It’s a positive feeling’. When you look at the photos, which have recently been published as a hardcover photo book, you can really sense what he means.

Usually, images of Tokyo show a very specific side of the city – like the bright lights, the colour, the tourist hotspots – but Ordóñez really gets under her skin. As with his previous ‘Ashimoto’ series, he manages to capture moments from everyday life; moments that are rarely seen or felt by those who don’t live here.

Through images in black and white, most of them at night and often close to abstraction, he takes us to a mysterious, sensual and ‘blurred’ Tokyo. We sat down for a chat with the photographer and asked him to give us more insight into the images.

How did the idea for ‘Tokyo Blur’ come about?

It came to me while walking through Tokyo in 2013, taking pictures of dark streets in the rain, cherry blossoms, or nightclubs. I intentionally visited the city without a prior idea of what kind of pictures I would take. I wanted to be guided by the city. A city that always gives me answers to the questions I ask it through my photographs or videos.

This is your fourth project in Tokyo since 2007. How does this one differ from your other series?

Unlike with previous projects where colour dominates the photos, I clearly visualised this one as black and white, because it facilitates the abstraction, and I was interested to go in that direction.

Tell us about the title.

The concept of ‘blur’ has a metaphorical meaning, expressed through pictures being out of focus, or by photographs in which it is difficult to understand what happens.

The photos are not ‘happy’ photos as such, yet you have said that they convey a positive feeling for you. Can you explain more?

These photos are based on experiences that give me a positive feeling about life. That is what I wanted to convey – indirectly – through this series. But it is understandable and acceptable that other people might interpret them in a different way, depending on their own experiences or beliefs. Indeed, I often use an indirect style in my projects to leave them open to new interpretations.

Symbolically, this series tries to capture those moments when we’re ‘out of focus’; far from our regular environment, away from stress and daily routine. Usually, in everyday life we try to have everything under control. But when we’re far from our cultural references, without understanding most of what happens around us, it’s easier to realise that to attempt to control life is impossible. Better to just live it.

Perhaps it’s just a paradox, but that’s the feeling I have every time I visit my beloved Tokyo. There are many situations that are ‘out of focus’ around me. However, this fact somehow disconnects the incessant noise of the mind and allows me a better understanding of life.

Do you take similar photos of Spain, or is this style unique to your photos of Tokyo?

Somehow, all my photos – and specifically those I’ve taken in Tokyo – are connected. They have a style in common, but they are also different. Each project is influenced by its precedent and, in turn, will influence future works, whether in theme, style or methodology. Right now, I’m starting a series in Barcelona, which is influenced by the methodology that I use for my works in Tokyo: walking calmly around the city without a specific direction, allowing the city to give me clues about the project through the images that appear in front of me.

You’ve chosen not to caption these photos. How come?

When I decided on the name of the project, I also decided that single pictures would not have their own titles; each would be titled ‘Tokyo Blur’ followed by a number. I wanted all the images to blur into each other, to reflect the concept of the series.

Describe Tokyo in one word.

See our blog for more photos from 'Tokyo Blur'.

Read our previous interview with César 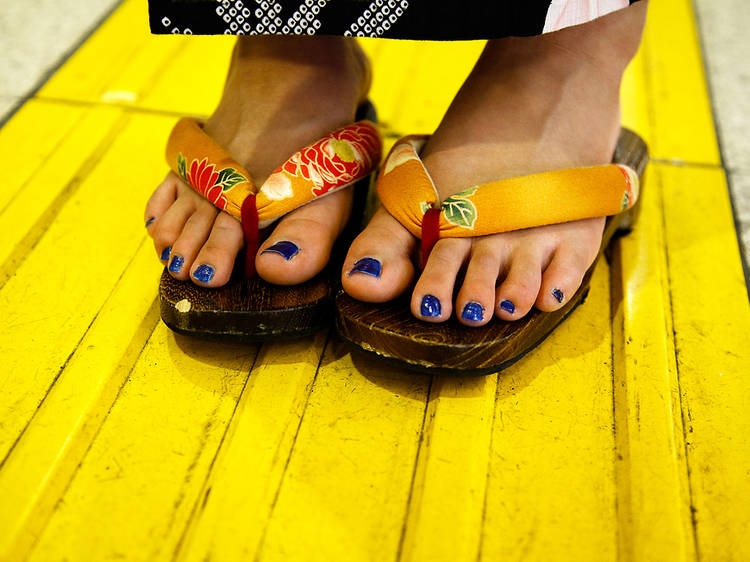