Watch a sumo wrestling practice and meet the stable cats

Finding tickets to see the big guys in action at the Ryogoku Kokugikan can be a bit of a wrestle, so here’s an alternative: the Arashio-Beya sumo stable in Hamacho lets anyone watch an asageiko (morning practice) for free. Located not far from Ryogoku, the traditional heart of the sport in Tokyo, Arashio-Beya boasts a practice ring with large streetside windows that provide a clear view of the battling rikishi (wrestlers), who descend from their living quarters to start their morning routine around 6.30am.

After warming up, the wrestlers start to break a sweat with some light sparring, followed by no-holds-barred brawls. The waft of incense carrying the heavy breathing outside will make you forget about the physical barrier separating you from the wrestlers and you’ll soon find yourself flinching at the impact with which they collide – a visceral experience to behold.

When the oyakata (stable master) walks into the room and takes his place on the dais to watch his pupils, the rikishi clash with ever more fervour under the hawkish gaze of the master, employing their entire repertoire of thrusts, grips and throws to force each other out of the dohyo (sumo ring).

Even as the scuffles get more scruffy and the chonmage (topknots) start to come undone, the wrestlers show no signs of breaking with the etiquette of respect or easing off on each other in the slightest. 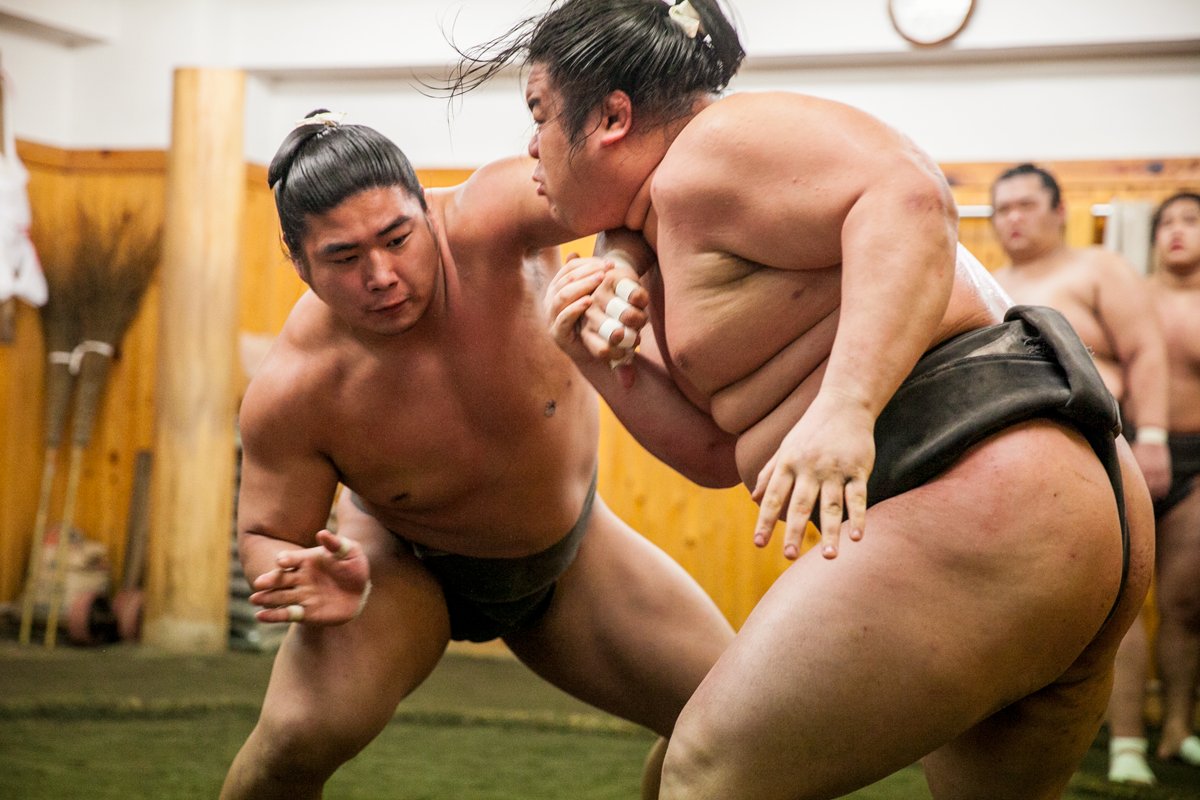 When the gruelling training ends around 8am, the wrestlers ceremoniously sweep the sand ring before coming outside to mingle with fans and pose for photos. Outside the ring, the brothers in arms are free to kick back and engage in chummy banter, revealing how close-knit they really are. After all, they live together in very close quarters upstairs and will do so for the remainders of their careers.

In addition to 12 sumo wrestlers, the stable is home to a pedigree Shiba dog, Sankichi, and two cats, Moru and Mugi, who were the subject of the picture book ‘Moru and Mugi, the Sumo Stable Cats’, which came out earlier this month. Moru was found as a kitten at a tournament in Fukuoka and adopted by the stable assistant 12 years ago. He likes watching the rikishi from his pillow on the windowsill and occasionally turns around to inspect the onlookers outside. Unlike his gregarious counterpart, Mugi is shy and rarely leaves the upstairs bedrooms.

The wrestlers are currently away for the November Grand Tournament in Fukuoka and will resume their training sessions on December 6. While you wait for them to come back, see the exhibition of the picture book ‘Moru and Mugi, the Sumo Stable Cats’. For more information about the Arashio stable and visiting times, click here.