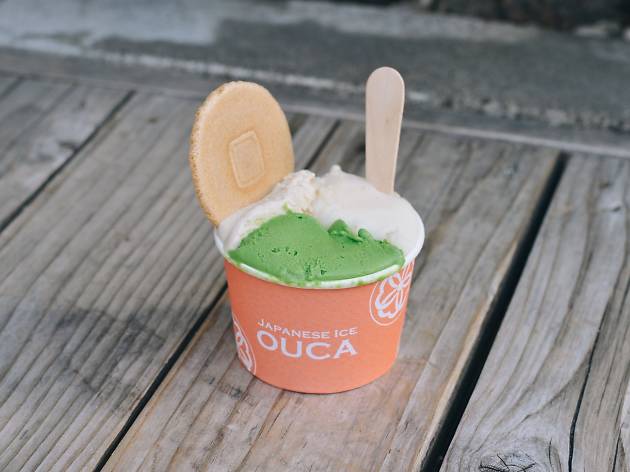 In a city that often takes its desserts more seriously than its politics, judging the best ices on offer can be a thankless task. Japanese Ice Ouca ought to come out near the top of any best of list, however, for the simple fact that nearly everything it turns its icy hands to tends to work. The only thing that disappointed us, in fact, was the location – a cafe this pleasant deserves to be in a more picturesque setting rather than on the corner of a busy (if not well-appointed) interchange.

It's a cosy creamery, nonetheless. The limited seating space is made to stretch as far as possible, skirting the walls and windows, upholstered in blonde wood. The decour is similarly light and airy, and whoever picks the soundtrack obviously has a thing for the twee school of Japanese indie: Kazumi Nikaido and Shugo Tokumaru abound.

The flavours on offer are homemade and seasonal – the sakura and azuki pot was all but empty on our visit. Especially good was the evergreen matcha gelato, an ice so complex in flavour you could pass an easy hour wondering what exactly was happening on your tongue and probably be none the wiser for it, perfectly offset with a scoop of ripe, tangy mango. It's well worth noting at this point that a handful of magic words go a long way at Ouca, namely 'osusume arimasuka?' ('what do you recommend?'). The fellow behind the counter is something of an artist, and his refrigerator makes for a wide-ranging and colourful palette indeed.

At ¥680 for a medium cup, Ouca isn't exactly a cheap outing, but the three scoops you get for that price are more than enough for a hearty snack, and the quality exceptional. The price also gets you a cup of wheat tea, if you're eating in, and a smattering of salted kombu flakes that cleanse the palette once you've had your sugar overdose. Is it the best Tokyo has to offer? We'll not go that far just yet, but while we think it over, you know where you can find us.